Warlord Two By Two: The Second 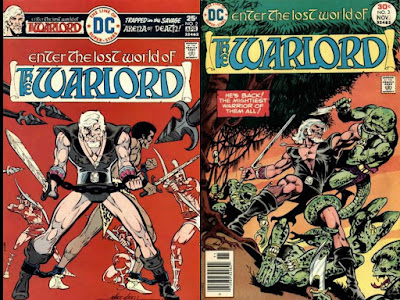 Time works strangely in the savage world of Skartaris, with its eternal sunshine, but that does not hide the dangers that are there.

Travis Morgan, the Warlord, is beginning his travels in this land, and is finding danger aplenty, but, along with the peril, he is also gaining skills and finding allies! 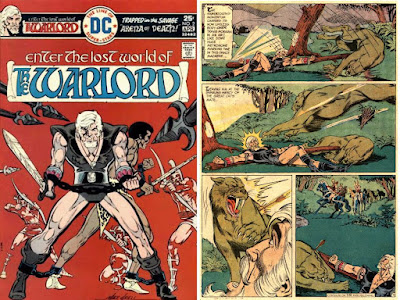 Warlord #2 (March-April, 1976) by Mike Grell begins where the first issue left off, with Travis waiting to die...

...and now, about to be dinner for two sabretooth tigers, eager for what they think is easy prey. 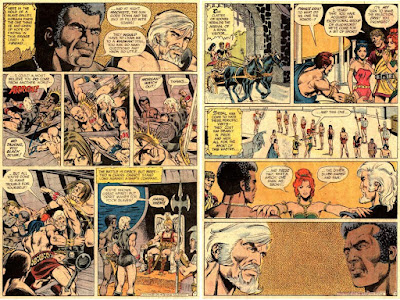 But, this modern man proves to not be such easy prey, killing one of the big cats, and being rescued by a wandering party from its mate.  Drogar the Terrible, leader of this army, offers Morgan passage to the city of Shamballah in his ship, which Morgan accepts.  At the ship, Morgan finds himself struck into unconsciousness, waking up in the hold of the ship, chained to the oars which power it with many others.  There, Morgan meets Machiste, another slave, with whom he starts an unsuccessful revolt.  As Drogar prepares to put the pair to death, a pirate ship interrupts his plans, where the duo help defend the ship.  Dorgar then decides to sell them as gladiators to Shebel, who trains gladiators. 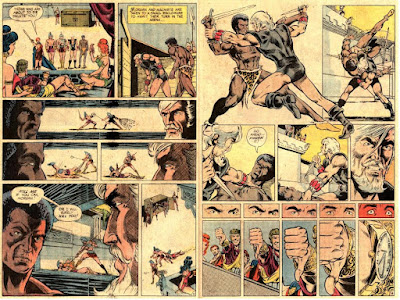 There, after much training, Prince Eris and his consorts bid the two to battle to the death, which they must do....with Travis about to kill Machiste....until Travis sees that the Prince is wearing a watch....the watch he gave to Tara!  Emboldened and enraged, Morgan instead frees the other gladiators.  The gladiators war on their captors, with Travis cornering the prince, finding out Tara was captured and sold to Deimos, who is now king of Thera.  Morgan then enlists the now freed slaves, asking them to become his army, promising to aid them by building advanced weapons, allowing to take the treasures of the conquerors they face, and the chance to die as free men!

Thus ends the saga of the Warlord....wait, what?? 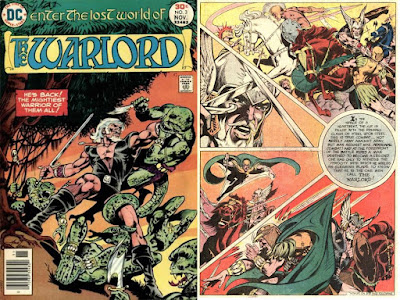 After a considerable wait (as sales proved to be better than expected, resurrecting the title from what seemed to be a cancellation), Warlord #3 (October-November, 1976) by Mike Grell comes to the comic racks, continuing the saga of modern man Travis Morgan, as he hunts for Tara, the woman he loves, in the savage land of Skartaris. 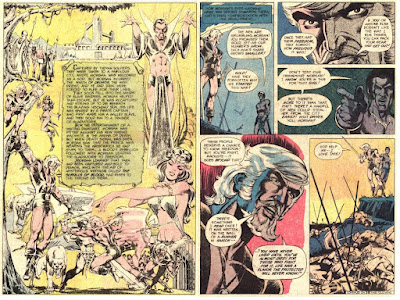 Travis and his army defeat a group of Theran soldiers, promising they come as liberators, not conquerors, still enlist more people into his army, the army of the Warlord (as he is beginning to be known as).  Travis confesses to Machiste that he enjoys the battles. Heading out on a scouting mission, Travis is excited to see a unicorn, and follows it, only to be set upon by lizard men.  They take him back and bind him as a sacrifice to their new god, which Travis recognizes....as his SR-71 Blackbird! 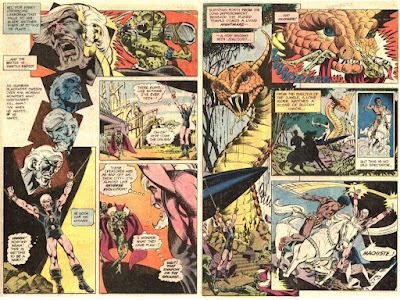 His plane crashed over the temple to their old god, yet, just as they are about to do him in, their old god, a giant snake, returns, making a meal of the lizard men.  Travis just avoids being eaten as Machiste arrives, with Travis finding his .44 Magnum in his plane, then using the plane's ejector seat as a weapon to kill the creature.  Afterward, Travis and Machiste ponder the advanced ruins around the lizardmen's temple, knowing the lizards couldn't have created this.  Morgan doesn't see the advanced technology inside, but does promise to return after they finish off Deimos. 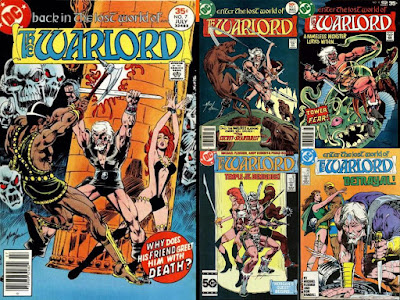 Over the lengthy time highlighted in these two issues, Morgan and Machiste had become friends united by their training and warring together, and these bonds will be tested over the years in the harsh climates of the unending sun of Skartaris!

Posted by Dave's Not Here Comic Blog at 3:11 AM