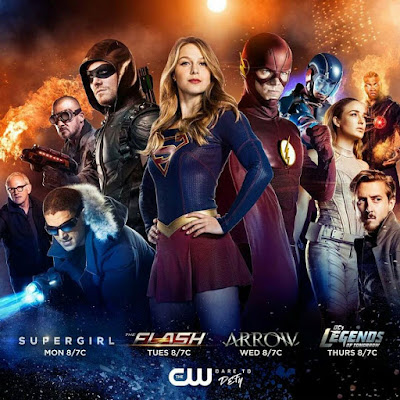 DC Comics is slowly taking over the CW, with four shows based on DC comic books soon to be airing from Monday through Thursday on the CW network....Supergirl, Flash, Arrow and the Legends of Tomorrow!

Here's a look at where to find some of the origins of these characters, and how to connect with fans of the shows and comics! 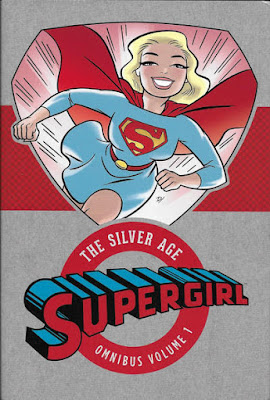 Supergirl started her career in Action Comics #252 (May, 1959) with "The Supergirl From Krypton" by Otto Binder and Al Plastino, where Supergirl lands on Earth after being sent from Argo City by her parents, Zor-El and Alura, and is met by her cousin Superman.  Supergirl's life continued as a back-up in Action Comics, and the Supergirl: The Silver Age Omnibus Volume 1 from 2016 with a cover by Darwyn Cooke features the Supergirl back-ups from Action Comics #252 to Action Comics #307 (December, 1963), with the stories having her meet new friends like Tommy Tomorrow, Krypto the Super-Dog, Superman's ex-girlfriend mermaid Lori Lemaris, the Legion of Super-Heroes (including Brainiac 5, a descendant of Superman foe, Brainiac and even future Legion member, Mon-El), and Batman and Robin, fights Superman foes like Mr. Mxyzptlk, Lex Luthor, Phantom Zoners General Zod, Jax-Ur and Kru-El,  as well as introducing Dick Malverne, Streaky the Super-Cat, Jerro the Mer-Boy, adoptive parents Fred and Edna Danvers, Luthor's sister Lena, Comet the Super-Horse, and even Supergirl's  own foes, Kandorian scientist and Supergirl look-a-like, Lesla Lar and Zora, also known as the Black Flame, and the revelation of Supergirl to the world!  Though they did miss a few stories of Supergirl from Superman issues of the time (but those were reprinted in Action Comics Giants). 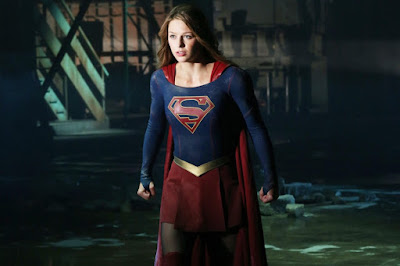 Make new friends and keep up with the Supergirl TV show at Supergirl Discussing the TV Show, a facebook group for fans of the TV show, and even the comics!  The show airs Mondays on the CW, and stars Melissa Benoist as Supergirl, dealing with being an upcoming hero after revealing herself to the world. 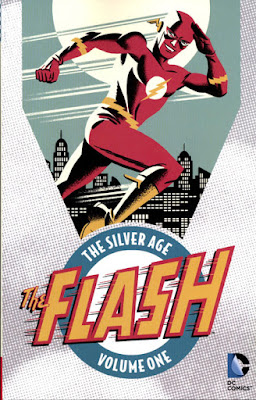 Flash began his run in Showcase #4 (September-October, 1956) with the "Mystery Of The Human Thunderbolt" by Robert Kanigher, Carmine Infantino and Joe Kubert, with police scientist Barry Allen getting hit by a bolt of lightning while standing in front of a wall of chemicals, turning into the fastest man alive...the Flash!  Flash's run continued into Showcase #8, #13 and #14, then into a magazine of his own, Flash, starting with #105 (February-March, 1959), and Barry has been running ever since.  The Flash: The Silver Age Volume One of 2016 contains the stories from Showcase #4, #8, #13, #14, and Flash #105 to #116 (November, 1960), featuring the first appearances of the Flash and Iris West, along with villains like the Turtle, Mazdan, Mr. Element and Dr. Alchemy, Captain Cold, Mirror Master, Pied Piper, Gorilla Grodd, Weather Wizard, and the Trickster, as well as Kid Flash Wally West and Ralph Dibny the Elongated Man!

Run around with fans of the Flash TV show at The Flash/Flash Facts Discussing the TV Show, a facebook group for fans of the CW drama, as well as the comic books that inspired them.  The show airs Tuesdays on the CW, with Grant Gustin as the Flash, Central City's super-speeding super-hero, who keeps the citizens of that city safe from the ever growing cast of super-villains and other dimensional menaces that threaten that city, as well as the world, the universe and the multiverse! 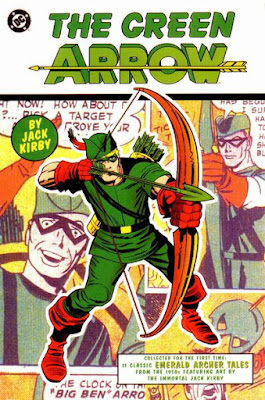 Green Arrow had the earliest start of all, in More Fun Comics #73 (November, 1941) by Mort Weisinger and George Papp, but it is his short run by France Herron and Jack Kirby from the 1950s that we are looking at now, as that is the start of the Silver Age for Green Arrow, and introduces the Green Arrow origin where he was stranded on an island and learned the skills that would make him Green Arrow as related in Adventure Comics #256 (January, 1959) in "The Green Arrow's First Case".  This was a bit of a change from Green Arrow's original origin, that had Speedy (Roy Harper) their for the origin, and it was in a mesa in the middle of the desert...but, things change over a few decades, and Green Arrow, though he proclaims to be a loner, has picked up quite a few friends over the years....like Black Canary, Arsenal, Speedy, and more (and being the first to join the Justice League after it formed).  True, in this collection of Green Arrow by Jack Kirby from 2002, you'll only see Green Arrow and Speedy, but there's a few interesting stories here from Adventure Comics #250 to #256 and World's Finest Comics #96 to #99, including the "Green Arrows of the World", with Oliver and Roy mentoring other archers trying to good elsewhere (an ideal reflected on the show....that of Ollie training others, that is). 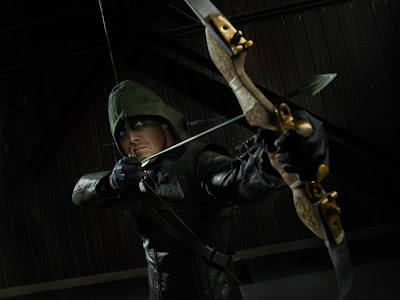 Oliver Queen's journey from a lost soul on the island to Star City super-hero is the focus of the Arrow TV show, and fans of that show can be found at the Arrow Cave/Arrow Discussing the TV Show, the facebook group dedicated to the Arrow show, as well as to the comic books that inspired the series.  Arrow airs Wednesdays on the CW, with Stephen Amell as the Arrow (then Green Arrow), the rich kid who learned archery when stranded, and returned to the world to make a difference at his home city. 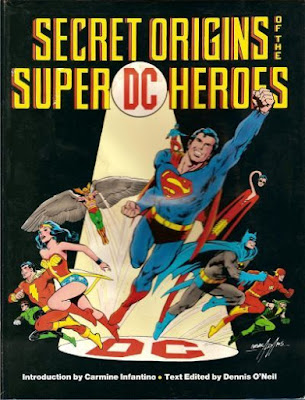 The Legends of Tomorrow aren't really a team in the comics....it's just a loose collection of heroes fighting together.  A great source for their beginnings is the Secret Origins of the Super DC Heroes from 1976, which collects the Golden Age and Silver Age origins of the Atom and Hawkman (both of whom were Legends), as well as Flash, Green Arrow, Green Lantern, Superman, Batman, Wonder Woman, as well as one origin for Captain Marvel and Plastic Man.  Due to the age of this book, you might need to time travel like Rip Hunter (the leader of the Legends of Tomorrow, though his first appearance is reprinted elsewhere), so perhaps another book is a good choice for fans of this show on a budget. 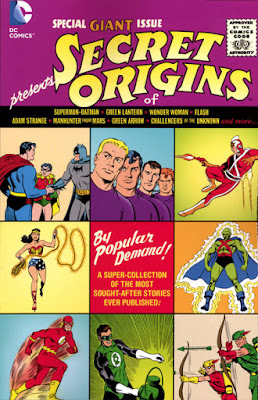 For a more recent collection, the Secret Origins Hardcover of 2012 is the way to go, reprinting the "Birth Of The Atom" by Gardner Fox, Gil Kane and Murphy Anderson from Showcase #34 (September-October, 1961), with scientist Ray Palmer using white dwarf star matter to shrink to save his girlfriend, Jean Loring.  This collection also features the origins of the Superman/Batman team, Adam Strange, Green Lantern (Hal Jordan), the Challengers of the Unknown, Wonder Woman (a different Silver Age origin than the book above), Martian Manhunter, Flash (Barry Allen), the Justice League of America, Aquaman, Robin (Dick Grayson), Superman (also a different Silver Age origin than the one above), the Robin-Jimmy Olsen team, Kid Flash, Eclipso, Hawkman (Katar Hol, the Silver Age Thanagarian) and his wife Hawkgirl, Dr. Fate, the Enchantress, Animal Man, Congorilla, the western El Diablo, Bizarro, and the Spectre....not bad?  Even if you don't know all these characters, this would be the place to get familiar with them!  DC would also be wise to collect Golden Age origins or first appearances in a book, especially with the Justice Society of America coming to Legends of Tomorrow for season 2, as well as a collection of some of the more modern heroes, like Rip Hunter, Firestorm and Vixen, and even a few villains like Heat Wave and Captain Cold!

Keep up with the past, present and future of the CW show, Legends of Tomorrow, featuring the Atom (Brandon Routh), Rip Hunter (Arthur Darvill), Firestorm (Victor Garber and Franz Drameh), Heat Wave (Dominic Purcell) and the White Canary (Caity Lotz) with the facebook group of DC's Legends of Tomorrow discussing the TV Show , that will let you in on who's who, as well as give you a chance to make your own legends with the friends you'll make there!

I hope to see you all on the message boards, and, as always, hope this helps anyone who watches the shows and wants to discover the wonders of comics!
Posted by Dave's Not Here Comic Blog at 4:24 AM