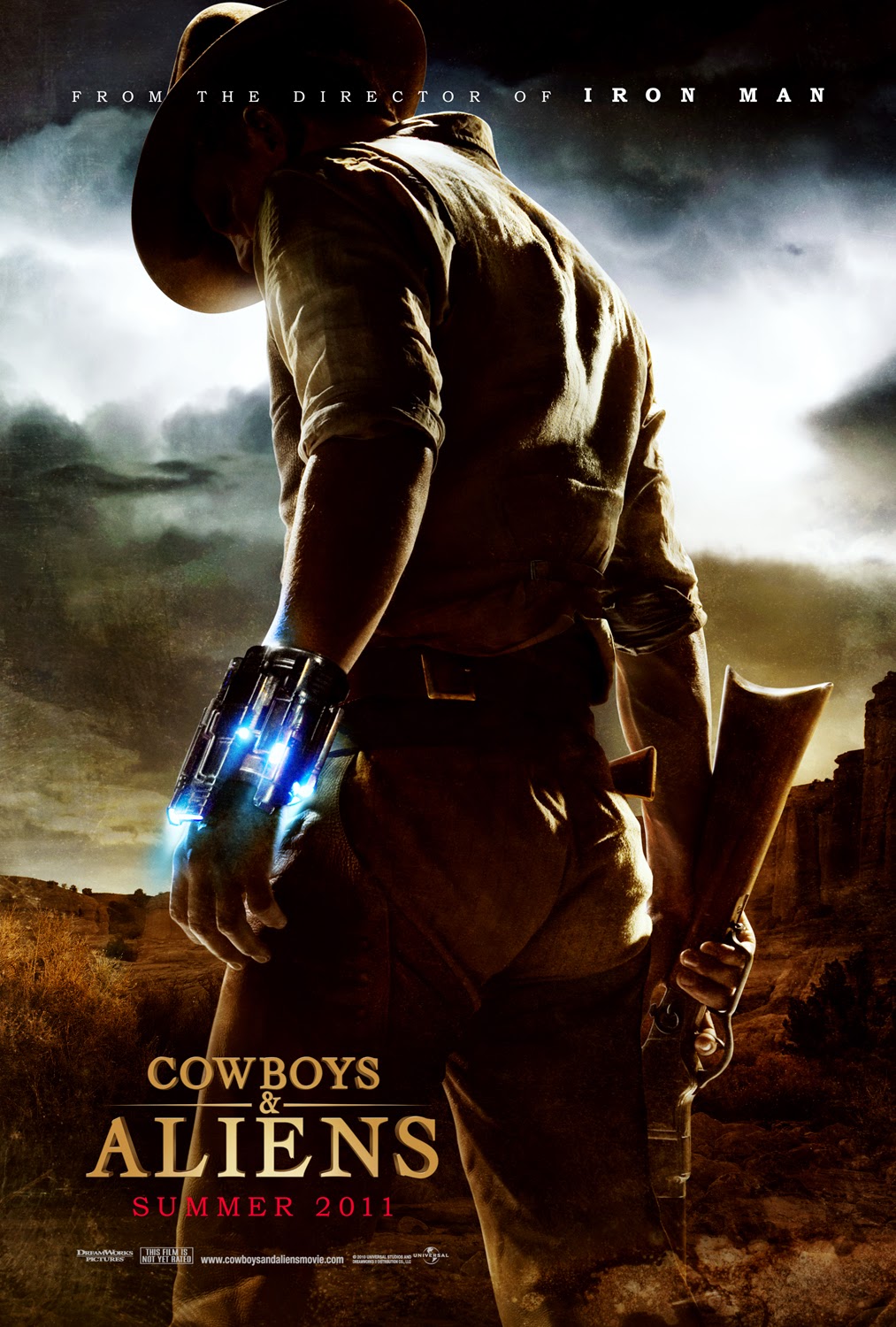 A bit of a cheat with this article…but not really.  You’ve might already have been told that Cowboys & Aliens was a comic, but the idea of cowboys fighting aliens started even before the 2006 Platinum Studios graphic novel, created by Scott Mitchell Rosenberg, written by Fred Van Lente & Andrew Foley, with art by Luciano Lima (or before Jon Favreau’s 2011 Cowboys and Aliens movie).

But, in a bit of twist, what will be covered here is how the alien was the good guy, and it was the cowboy who was evil.  The time was 1972, and Superman (that alien son of Krypton) was fighting his most devastating foe….lagging sales.  In an effort to spice up sales, Superman was to fight new villains, very loosely based on popular movie series, and in this case it was Clint Eastwood’s the “Man with No Name” (from movies “A Fist Full of Dollars”, “For A Few Dollars More” and “The Good, the Bad, and the Ugly”). 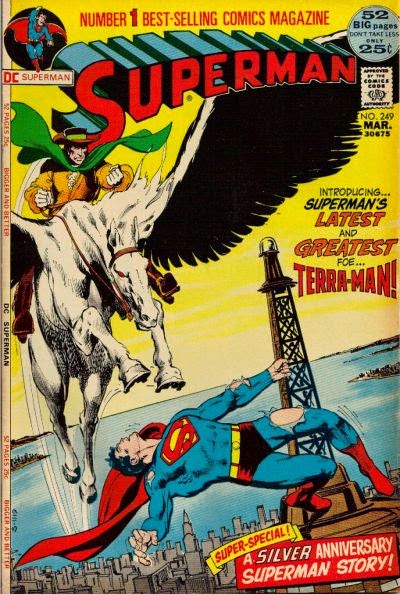 Thus came Terra-Man in Superman #249 in March 1972 in “The Challenge of Terra-Man”, by Cary Bates, Curt Swan and Murphy Anderson (as you can see from the cover by Neal Adams; Terra-Man’s appearance on the inside is a little different).

Now, Terra-Man’s story really started in the Old West (and in the back up tale, “The Origin of Terra-Man”, written by Cary Bates, with art by Dick Dillin and Neal Adams) of the 1880s, with a ten-year old Tobias Manning stealing gold from a stagecoach.  As his father, Jess, praises his thievery, an alien ship steals the Manning’s ill-gotten golden booty.  This blue skinned alien currency collector is shot by Russ Manning, and returns fire, killing the man in front of his boy.  Not having planned to kill the man, and thanks to a telepathic link formed with Jess at this death, the spaceman decides to adopt the boy, wiping Toby’s mind of how he killed his father and instead telling the lad “The law what done it, boy!”. 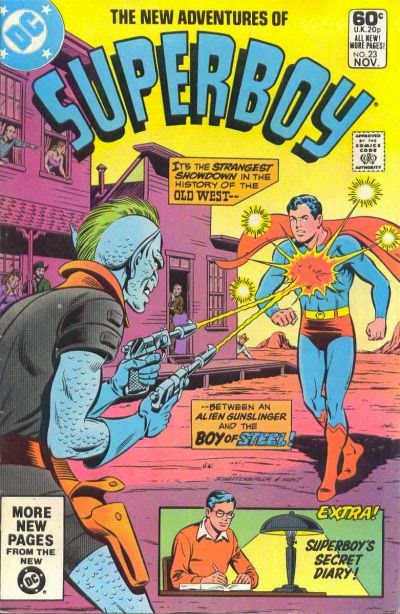 The alien plans to make a great thief out of young Toby, who, due to his planet of origin, is dubbed “Terra-Man”.  The collector outfits young Terra-Man with an oxygenator-thermostat, which will allow Tobias to breathe and be comfortable in any environment and in space, and Toby gets an energy lasso, with which Toby catches an Arguvian space-steed (a winged horse, who he’ll call Nova).  Using his own type of “chewin’ tobacco” to induce hallucinations, the mounted marauder steals coins from a planet and brings his haul to the collector.  Terra-Man then kills his alien mentor, as Toby figured out a message from his pa that the alien was really Jess’ killer.  With that, Terra-Man returned to Earth to take on Superman (as seen the first story of the issue).  In that story, Terra-Man faced Superman with enlarging bullets, a cheroot (cigar) with ultra-toxic vapors, atomic bullets, and a spur made of zanoite – the hardest substance in the galaxy – which he fires at the action ace as a bullet.  Superman beats and captures Terra-Man, but Nova remains free. 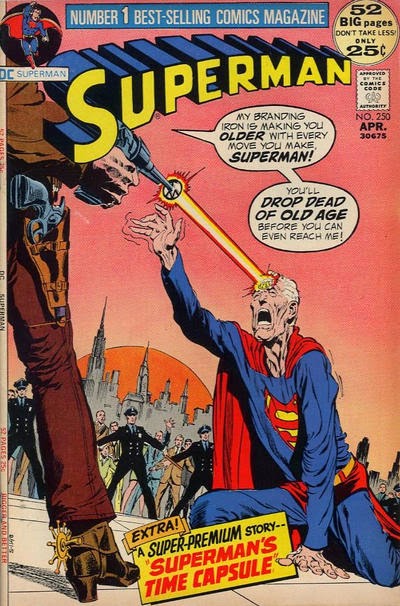 Terra-Man returns in the very next issue, Superman #250 (April 1972, by Cary Bates and Curt Swan) in a story called “Have Horse, Will Fly!”, where Terra-Man whistles for Nova to free him from prison solitary.  Superman shows up to stop the western wizard, but Tobias incapacitates the Kryptonian with his tooth of gravita-gold, which sticks to Superman and allows Terra-Man to escape.  Terra-Man attracts Superman by attacking out of western movie in a theatre, and the sagebrush satan uses a special branding iron on the Man of Steel.  This brand makes Superman hyper-age whenever he uses one of his super powers.  The man from Krypton tries his super-vision on Terra-Man, but it was mostly reflected by Terra-Man’s poncho.  Still, Superman got some information from his gamble, and after facing down Terra-Man’s power glove (which magnified Tobias’ strength), was able to capture the outlaw again. 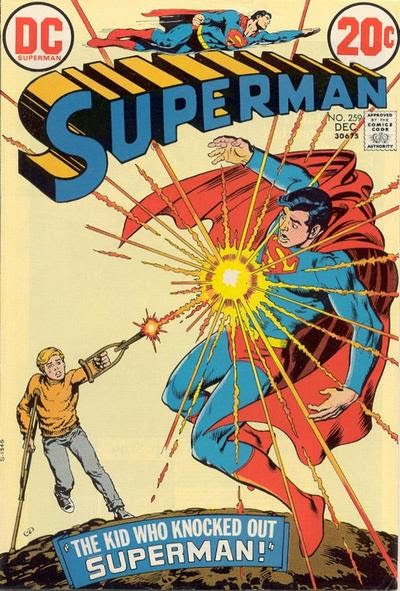 Terra-Man returned again in Superman #259 (December 1972, also by Cary Bates and Curt Swan) with “The Kid Who Knocked Out Superman!”.  The cosmic cowboy uses a “T-M” brand on his arm to teleport his prison away from him, and thus escape by standing still.  A quick battle with Superman (and wrestling Terra-Man’s lasso, fighting Nova’s hoof-blasters, and watching Terra-Man disappear using his stardust).  Terra-Man figures out something was wrong with Superman and with using his own limited telepathic abilities, fixes on an image of a lynx.  Tobias has Nova track (yes, the winged steed seems to also have “space-tracking abilities”) track the lynx belonging to Clark Kent’s neighbor, a kid named Billy Anders (the lynx is a focusing image which allows Superman to recall his strength from Billy, as Superman has lost the ability to control his super-strength – long story).  Well, Terra-Man figures this out, and traps Superman where only his strength can save him and wipes all memory of the lynx from Earth.  Billy eventually remembers the critter due to scratches he has, and Superman frees himself, tricks Terra-Man (and Nova) into an exile dimension by turning Tobias’ teleporting bullets on Terra-Man himself, and gets his strength back from Billy Anders (it was the Silver Age, just let it go….a lot happened in comics those days!). 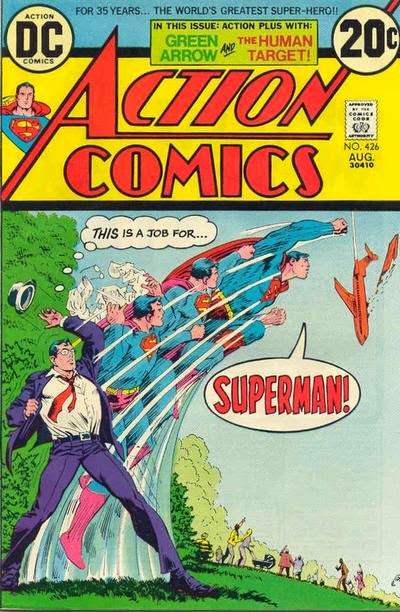 In the “Master Of The Moon Rocks!” from Action Comics #426 (August 1973, by Cary Bates/Curt Swan), Terra-Man returns secretly to lead a cult to rid Earth of “evil moon rocks”.

Turns out Superman was to trigger an explosion by holding Terra-Man’s gun…and figures it out in time, disposing of the gun-bomb. 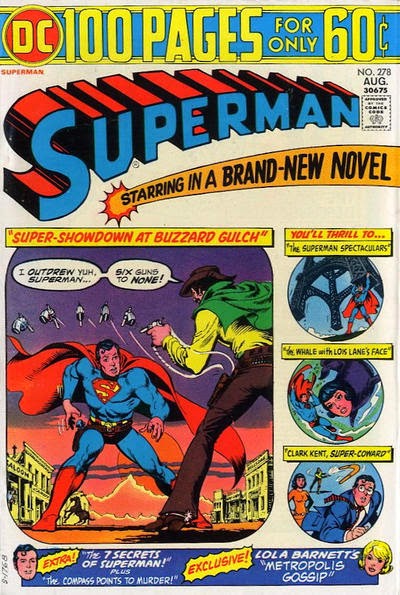 Terra-Man gets his first cover appearance in his usual look with Superman #278 (August 1974, by Cary Bates/Curt Swan) in a “Super-Showdown At Buzzard Gulch!”.  Terra-Man teleports Superman and his friends (which includes Clark Kent, allowing Superman to be there really quick) to Buzzard Gulch, a town Tobias created with his super-science.  Terra-Man makes them all think they belong in the Old West, and plans to kill them all with a special bullet for each.  But first, Terra-Man tries to take down Superman with a six-gun attack – from SIX GUNS that remotely fire, a giant bull, and a constricting lasso.  Still, Superman uses Terra-Man’s lack of knowledge of his identity as Clark Kent to beat Terra-Man (and revive his friends). Then, Terra-Man returns along with eight other Superman foes in Superman #299 (May 1976, by Cary Bates with Elliot S! Maggin and Curt Swan on the art) in “The Double-Or-Nothing Life Of Superman!”.


Terra-Man teams with the Prankster and the Toyman, and was the first villain team to be defeated in a plan by a master manipulator that involved using Superman’s own abilities to trigger the end of the Earth (strangely similar to Tobias’ own plan from not so long ago...and about as successful here!).

Still, at least Tobias was a part of a bigger group for a time!


Every Which Way But Loose 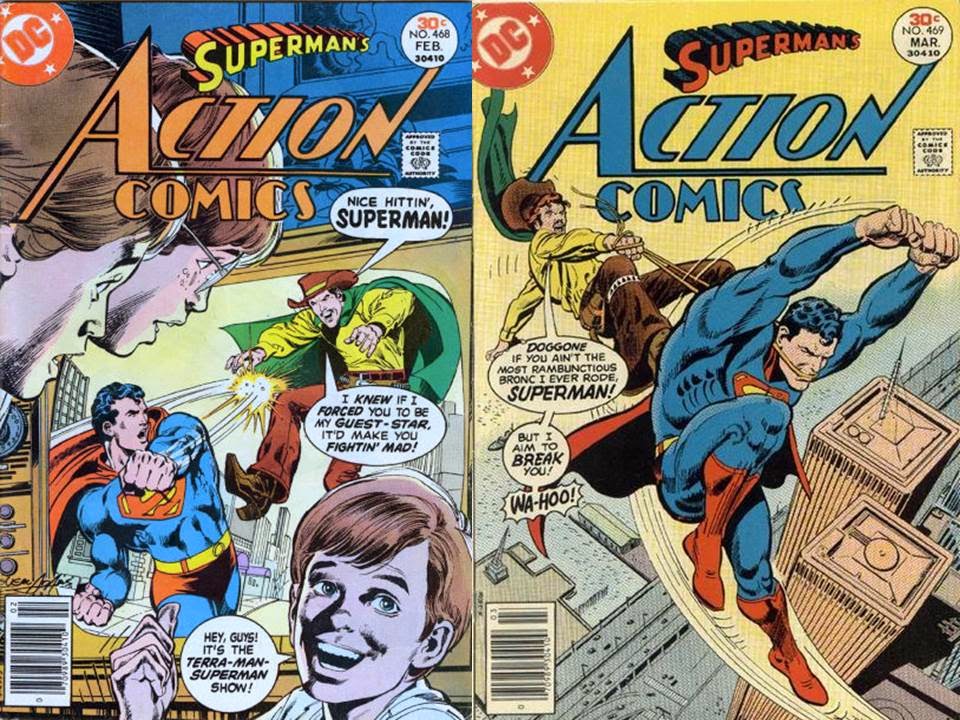 These little appearances were too little for Terra-Man, who returned in force (and with Nova for the first time since Superman #259) in Action Comics #468-470 (February-April 1977, all by Cary Bates/Curt Swan), during which Terra-Man planned a television show to face Superman in (and this stunning Neal Adams cover)!  During this run, each issue ends with a cliffhanger, so this seems to be a great place to hang a cliff, to have more Terra-Man coming soon!
Posted by Dave's Not Here Comic Blog at 7:16 AM