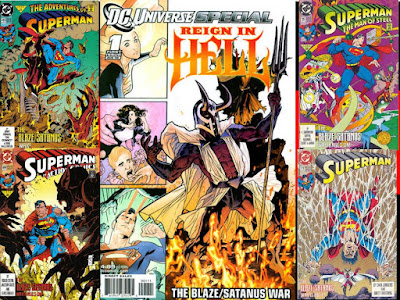 Back with another installment for the Super Blog Team-Up, and here, like all of the blogs involved, we are going to hell.  But, our twist is...we are taking Superman with us!

Delving a little past our usual time frame, going into the "triangle" era of Superman (as the Silver Age usually had Superman fighting menaces that looked supernatural, but weren't).  Here, Superman and the Daily Planet staff are in between a battle between the demonic forces of Blaze and her brother, Lord Satanus, fighting the Blaze/Satanus War! 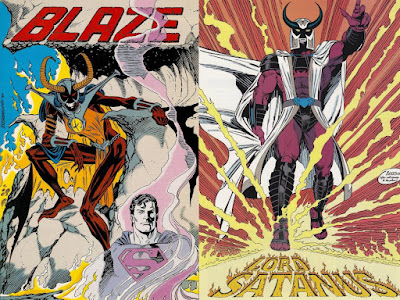 Blaze first appeared in Action Comics #655 (July, 1990), as a club owner that was secretly a demon from hell.  Her machinations in Metropolis helped lead to the the death of Jerry White (the son of Alice White and Perry White, editor of the Daily Planet).  Her brother, Lord Satanus, appears first in Adventures Of Superman #493 (August, 1992), with his own plans for Metropolis, but, as that issue also starts the war, more will be revealed as we go along... 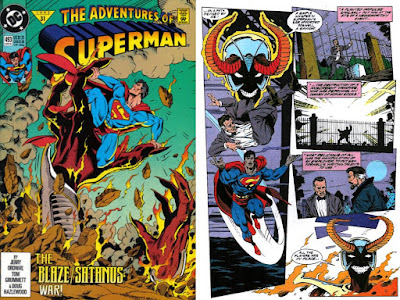 The war begins in Adventures Of Superman #493 (August, 1992) by Jerry Ordway, Tom Grummett and Doug Hazelwood, with Blaze manipulating fired Daily Planet editor Sam Foswell to Newstime, to become their managing editor (as she saved him from suicide by pretending to be an angel).  At Newstime, as Foswell walks the corridors to meet Collin Thornton, owner of Newstime, 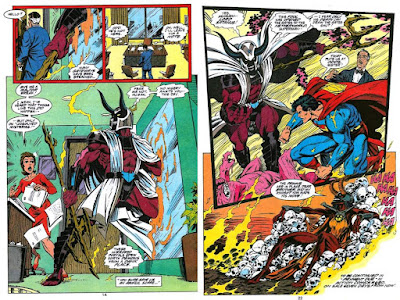 Back at the Daily Planet, the crew go on as normal, with Jimmy Olsen going to his side job as Turtle Boy, with Clark Kent and Lois Lane following (and the lot going to check on Sam and his heading to Newstime).  Good thing they headed there, as after meeting with Collin Thornton, demons seems to come out of the mirrors at Newstime, as does Lord Satanus.  Clark goes into action as Superman, confronted by Lord Satanus, who plans to kill Foswell, as Blaze enjoys her scheme. 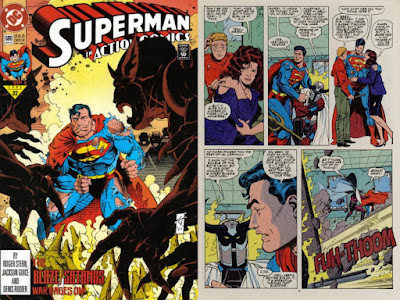 In Action Comics #680 (August, 1992) by Roger Stern, Butch Guice and Denis Rodier, Superman and Lord Satanus form a loose alliance as Foswell flees further into Newstime, Jimmy and Lois battle demons, Metropolis gets wind of problems at Newstime as Satanus puts a mystical force field around the building.  Blaze appears as an angel to manipulate Foswell, transforming him into a demon to attack Superman, Lois, Jimmy and Satanus. 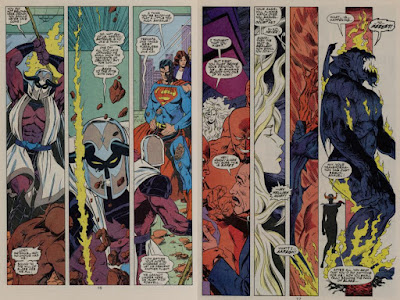 Outside, Supergirl arrives in Metropolis and starts to tear through the force field around the building, prompting Lord Satanus to transport the whole Newstime building and its inhabitants into another dimension. 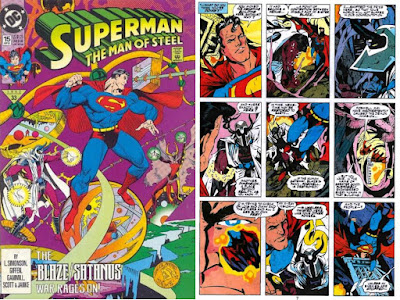 With Superman: The Man Of Steel #15 (September, 1992) by Louise Simonson, Kerry Gammill, Keith Giffen, Dennis Janke and Trevor Scott, the war rages on.  With the building gone, Perry White heads to the location of Newstime, where his wife Alice was headed, but they are lured into the former church turned nightclub of Blaze by the spirit of Jerry White.  Superman and Lord Satanus continue to battle Blaze's demons as Lois and Jimmy round up the Newstime employees now in a building in another dimension. 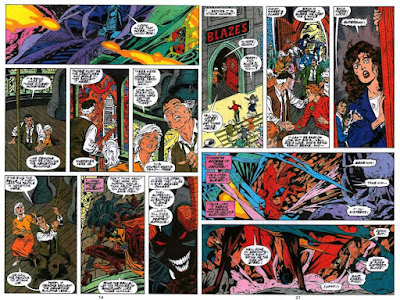 To counter Satanus' plan, Blaze sends her church/nightclub into that other dimension with the Whites.  In this other dimension, Superman has problems controlling his powers, making the battle tough for him to fight.  To help, Perry rings the bells of the church to distract the demons, which it does, as well as distracting Satanus, allowing Blaze to appear, and reveal her plan, to manipulate Superman to help her against her brother to prevent Satanus from killing the now demon Foswell. 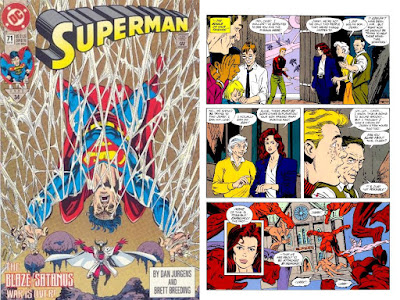 This battle comes to an end in Superman #71 (September, 1992) by Dan Jurgens and Brett Breeding, as Blaze's plan was revealed.  Lois and Jimmy have gotten the Newstime employees safely to Blaze's church/nightclub, as Superman battle Lord Satanus.  As the church, Blaze tortures the Whites with the truth their son is dead and merges her demons into one to attack the church.  Superman and Lord Satanus decide to work together as Superman gets help from the demonic Foswell (who joins Satanus). 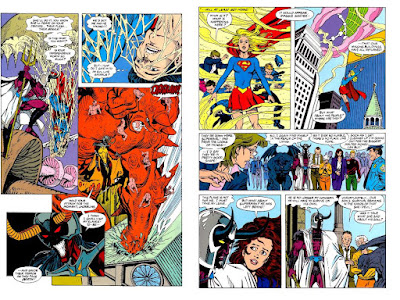 Satanus goes to fight the combined demon as Superman rings the bell at the church to power Satanus.  Blaze attacks Superman to stop him, but Perry rises up to continue ringing the bell, powering Satanus to defeat the demon, returning the two buildings and their inhabitants to Earth, as Superman and Blaze spin off into limbo.  On Earth, Satanus takes the leave of the Daily Planet staff, taking Foswell with him.  The duo appear in the Newstime office, where Satanus returns Foswell to human form, reveling in his new ally, and revealing that Satanus is also....Collin Thornton! 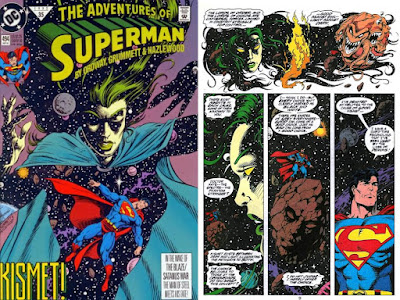 Not wanting to leave you (and Superman) in limbo, here's a little on Adventures Of Superman #494 (September, 1992) by Jerry Ordway, Tom Grummett and Doug Hazelwood, where Superman was found by Kismet!  Here, this interdimensionally powered being encounters Superman, showing him not to have regrets, even though Superman had been manipulated by demonic forces, his goodness would still win out. 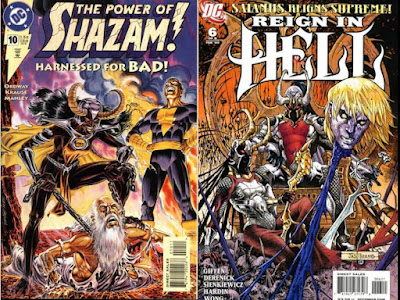 Blaze and Lord Satanus continued their war, including revelations in the Power Of Shazam! that they are the children of the old wizard Shazam (and manipulating Black Adam), and later, their battles against Neron in the Reign of Hell (which inspired DC to reprint the non-Adventures Of Superman issues of the Blaze/Satanus war in the DC Universe Special). 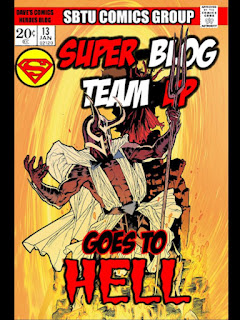 But. enough of that special hell and onto other kinds of hell as well!

The folks at the Super Blog Team-Up have been busy little demons, working on hellish articles of their own, all with a certain common thread. 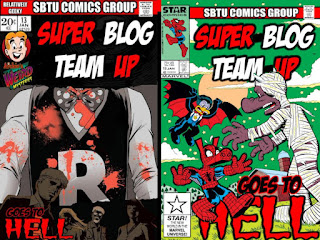 So, if you are of strong courage, and willing to explore more of the levels of hell, with your faithful companions of the SBTU, here they are:

The Telltale Mind - Patsy Walker - To Hell and Back (and Back and Back...)

In My Not So Humble Opinion - Savage Dragon Goes To Hell

Superhero Satellite: Spider-Ham in the world of Licensing Hell! 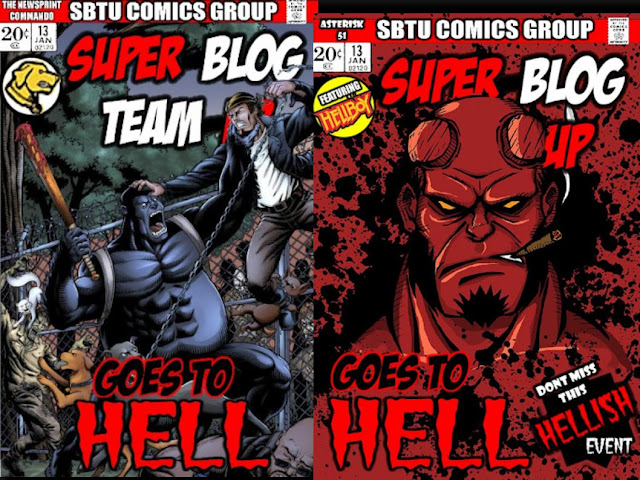 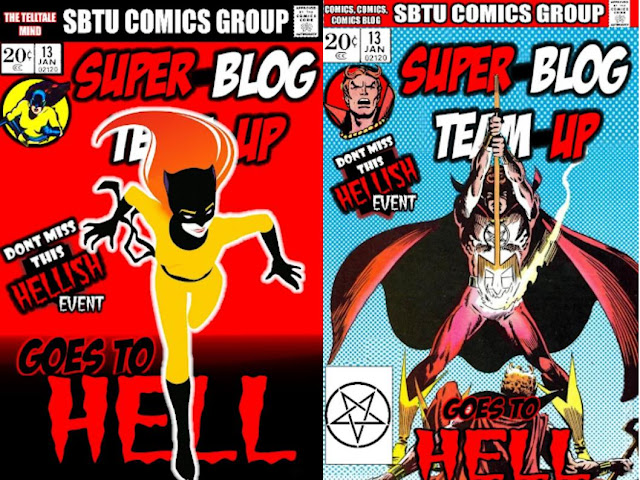 Posted by Dave's Not Here Comic Blog at 5:11 AM