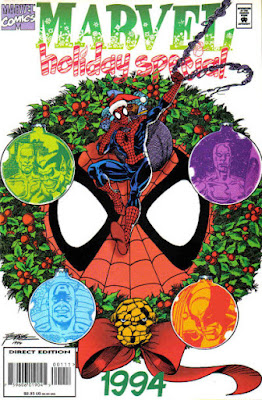 George Perez has contributed a lot of art to Marvel over the decades, but he hasn't done too many Christmas based drawings....at least until the Marvel Holiday Special of 1994.

Made that much more special, as it also has a rare drawing of Spider-Man, and even X-Men Iceman and Wolverine (though George did draw a lot of the Beast when he was an Avenger).

Sad that he didn't doing anything inside, but the stories are: Beast/Iceman by Kurt Busiek, James Fry and Neil Vokes; Captain America by John Ostrander and Tom Mandrake; the Thing by Gregory Wright and Mike Manley; Silver Surfer by J. M. DeMatteis, Mindy Newell, Rick Leonardi and Al Williamson; Spider-Man by Karl Bollers and Gray Morrow and the X-Men featuring Wolverine by Karl Bollers and Sal Buscema as the Marvel heroes get ready for Christmas.

Posted by Dave's Not Here Comic Blog at 1:22 PM