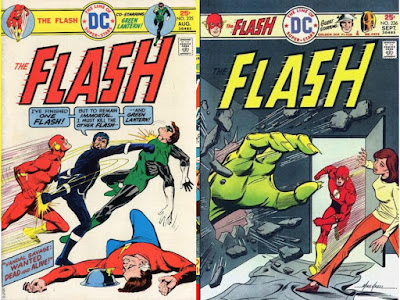 One odd thing over the years, is that while JLA/JSA meetings seemed to take either more issues or more space, Flash team-ups usually only went for one issue....

...except for the 3 issues where Barry and Jay Flashes worked together here! 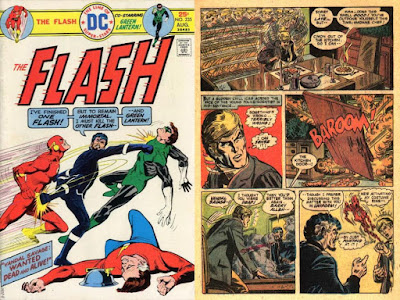 It started simple enough in Flash #235 (August, 1975) by Cary Bates, Irv Novick and Tex Blaisdell (under a stunning Dick Giordano cover), heralding not only Jay Flash's return, but that of Green Lantern Hal Jordan and villain, Vandal Savage....in a full length tale.


Barry thought his Flash adventures were going to make him late for a dinner of Veal Scaloppine with his wife Iris...but, instead, he found her missing.  Instead, he is confronted by Vandal Savage, who tells him he took his wife (and after a bit of a battle....in Barry's mind), Flash follows up on this.  Meanwhile, Hal Jordan (Earth's Green Lantern) is getting his ex, Carol Ferris, back in his life, until Vandal Savage shows up and takes her from him (and gives Hal a little mental battle as well). 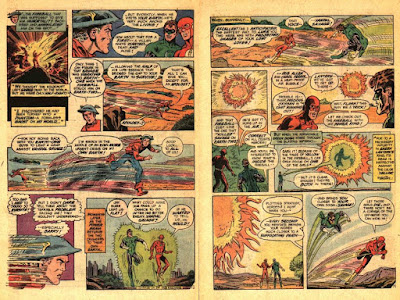 The heroes end up on Earth-2, helping out Flash Jay Garrick, and asking him about Vandal Savage....and he relates that the meteor crash which may have not have taken Savage's life, but just transferred him to Earth-1, but, Jay was mysteriously too busy to help the heroes.  Back to Earth-1, where Vandal Savage taunts Flash and Green Lantern, goading them to finding the meteor which would restore Savage's immortality, and Hal uses his power ring to see at least one of the girls are inside it.....and Green Lantern and Flash use their powers to put out the flaming meteor (and capture Vandal Savage).  They open the meteor....to find only Carol Ferris.  Savage explains he went to kidnap Iris, but she was already missing.  This puts Barry into detective mode, now on the hunt for his wife....though, if he could just peer into Earth-2 he would find her, as Jay is hiding her from him!


Jay Flash was last in a team-up with Barry in Flash #229, and Vandal Savage appeared in the Jay-Barry meeting the time previous, in Flash #215, both covered here, with Vandal Savage next returning for a bit in the 1970s All-Star Comics run.

Nowhere On The Face Of The Earth 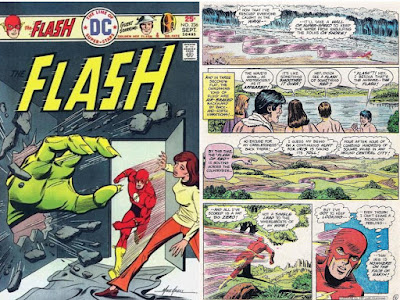 Not finding Iris has put Barry in a bit of distress, as shown in Flash #236 (September, 1975) by Cary Bates, Irv Novick and Tex Blaisdell (under a Mike Grell cover).

Barry Flash is searching (a little carelessly) through Central City and the surrounding areas for his wife, Iris, to no avail.

Meanwhile, on Earth-2, Jay Flash is stopping menaces in Keystone City, with a little help from the mystical Dr. Fate, who has come to help with another problem...that of Iris Allen!  Dr. Fate uses a spell to keep Barry Flash busy on Earth-1 while Jay Flash and he look for a solution for the problem Iris has, which is she now has an aura that, if it comes into contact Flash's super speed aura, will result in a cataclysm. 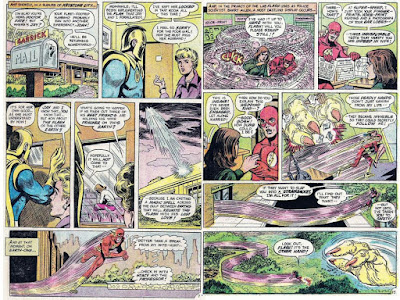 Barry thinks he sees Iris on a live TV report, so goes to the tunnel that it is coming from, and does find Iris....or so he thinks, as the lady says she isn't.  While there, he is attacked by a pair of mystical hands, and he tries to keep "Iris" safe from them, eventually defeating the hands, and finding out that this lady wasn't Iris.  It was all a mystical spell by Dr. Fate to keep Barry busy, but, while that did, neither Dr. Fate nor Jay Flash found a cure for Iris.  So, they decide to send her to the 30th Century for help....but, coincidentally, that's where Barry Flash is going to look for her, speeding off on his cosmic treadmill!

Dr. Fate is fresh off his appearance with the JLA/JSA, meeting the Freedom Fighters (as chronicled here), and Joan Garrick makes a quick appearance, between Flash #229 and the 1970s All-Star Comics run.. 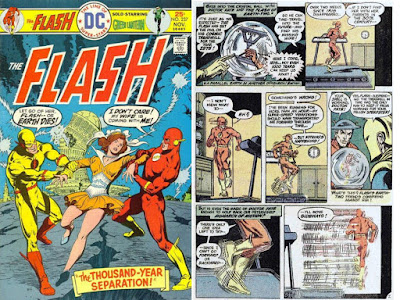 The distractions Barry had faced to find Iris has made him desperate in Flash #237 (November, 1975) by Cary Bates, Irv Novick and Frank McLaughlin (with Ernie Chan doing the cover....and revealing the mystery villain behind Iris' disappearance....the Reverse-Flash!).

Barry is on his way to 1000 years in the future, the time Iris West originally came from (she was translocated into the past to keep her alive, explained in another story for another day).

Flash is approaching his wife and her parents in the future....when he suddenly gets a mystic bolt from Dr. Fate explaining to him what has been going on and the dire fate the universe will suffer if he touches his wife again.   Even being this close to Iris causes disasters, but why? 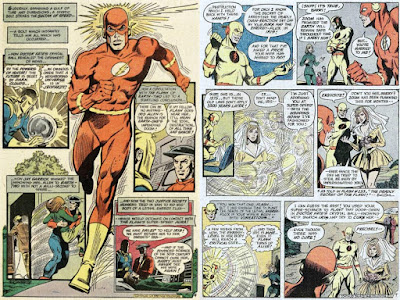 Well, Reverse-Flash shows up to explain.  Seems he set this plan in motion the last time he battled Barry (and tried to marry Iris).  Now, Reverse-Flash plans to marry her in 2975!  Barry is dejected, but notices things Eobard Thawne does....and, after a quick battle with his foe, figures out the vibrations he uses to cancel out the energy flux around Iris, and is able to duplicate them to free her from their problem.  Thawne escapes, as Barry and Iris enjoy their reunion, then head home for a long overdue dinner! 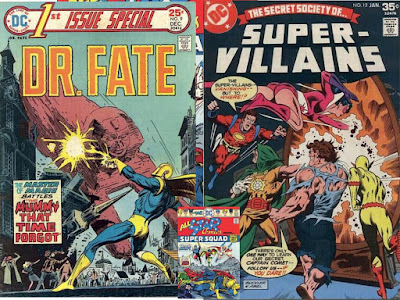 Dr. Fate appears next in his first solo story since the Golden Age, then joins Jay in the first issue of the JSA revival of All-Star Comics that introduced Power Girl.  Reverse-Flash isn't done with alternate Earths either, as he meets with the magical fellow here in a later issue of Secret Society of Super-Villains. 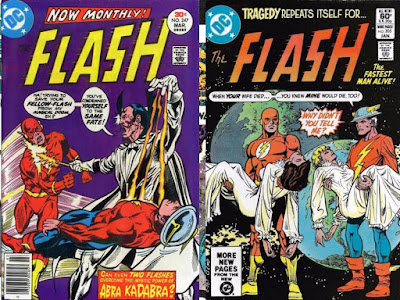 Come back quick, because there are still many Flash crossovers to come!