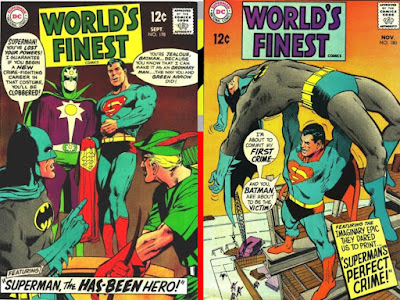 Superman, losing his powers and adopting a new costumed identity?  Then, turning on Batman with a murderous rage?

No, even a little less than normal, as these two issues of World's Finest Comics contain an "imaginary story", a story with familiar casts, but willing to shake up the status quo....now, these are set on alternate Earths.

Let's take a look at how things change and progress here! 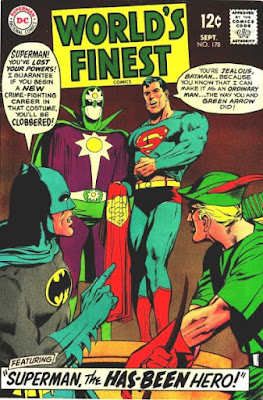 This saga begins in World's Finest Comics #178 (September, 1968) by Cary Bates, Curt Swan and Jack Abel, all under the stunning cover by Neal Adams with Superman taking on a new identity!


But, why is Superman taking on this new identity and what happened to his powers?


Superman, piloting a space ship into a dimensional rip in space caused by a super cobalt bomb, goes searching for lost aircraft there.  Finding an odd cavern, Superman finds alien machinery which coats his craft in a eerie white goo that shuts his systems down. 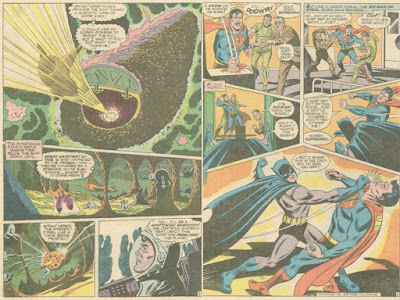 Not needing the ship to get around, Superman heads out and is covered with the goo as well.  Not feeling well, he heads back through the dimensional aperture, landing unconscious at a military base.  The doctors, checking on Superman find out he is fine, but now powerless, with no hope of regaining his super abilities.  Thankfully, they had called Batman in, as the shock of his loss drove Superman a little crazy for a time, and Batman slowed his friend down.

Superman tries just living life as Clark Kent, reporter, but then, after covering an archery exhibition by Green Arrow and Speedy, gets the idea to create his own non-powered costumed hero identity. 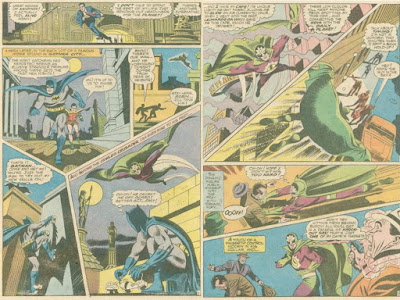 Batman and Robin respond to a prowler in the warehouse district, and Batman fights the green and purple costumed creeper, eventually knocking him out.  Removing his mask, Batman finds....Superman!  Clark had created the heroic identity of Nova, and was practicing his moves on the Gotham waterfront, when mistaken by security for a prowler.  Superman, as Nova, works with a special cape that allows him to glide and has special gadgets.  But, in encountering some thugs outside the Daily Planet, Nova finds his old Superman safety precautions of pulling his punches allows the thugs to capture him....and take him to the crime boss, Mr. Socrates (and into the next issue!). 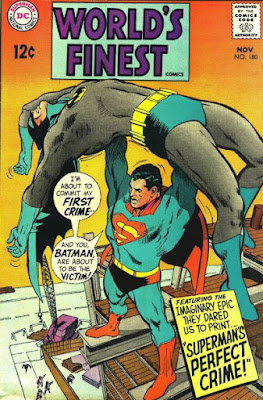 Continuing the imaginary story from issue #178 (#179 was a Giant, filled with fascinating reprints), World's Finest Comics #180 (November, 1968) has an even bigger shocker of a cover by Neal Adams, to reflect the shocks within the story by Cary Bates, Ross Andru and Mike Esposito.


After a quick splash page and recap, the story gets down and dirty with Mr. Socrates revealing his plans for Superman's new heroic identity of Nova....to wipe out Batman!  Superman scoffs at Socrates' plans, but his thugs work Superman over again.  Batman, checking on Clark to find him not home, leaves him information on Horatio Socrates, and wonders where his now non-super friend could be. 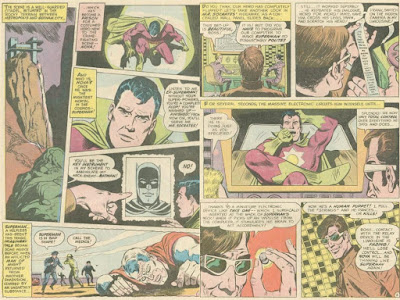 Nova, recovering from his surgery, is very happy to work with Socrates....as Mr. Socrates had a mind control device implanted in Nova's neck, allowing him to control the former Superman.  While Socrates' men take Nova back to Metropolis, the control breaks for a second while in a tunnel (with Nova fighting the henchman) until Socrates' computer takes back control.

Batman and Robin are concerned about Socrates (a millionaire criminal computer expert, that had his eyesight damaged in a fight with Batman), when over the radio, the Dynamic Duo hear of a crime spree in Gotham by Nova!

The pair head to a construction site where he was spotted, finding Nova in his Superman costume, planning to kill Batman until they take him down, and back to the Bat-Cave. 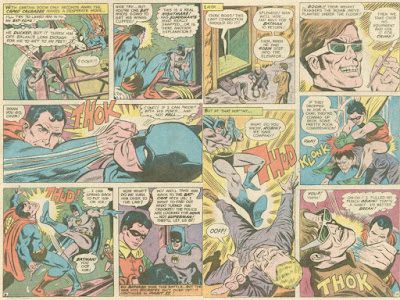 While there, Superman is free from the control, but escapes in the Batmobile.  Batman and Robin follow, now knowing of the device in Superman's neck (while Mr. Socrates and his men use the tracker in the device to go to the Bat Cave).  Superman heads out to a rocket testing facility, while Socrates and his men break into the Bat Cave, preparing a bomb under their elevator to finish the Dynamic Duo, but, a now immune Superman, with Batman and Robin, show up, stop Socrates thugs, and Socrates, in trying to escape, kills himself in the bomb blast meant for Batman and Robin.  The radio signals at the rocket range messed up the control device, and with Batman's help, Superman made a lead collar to continually block the signal.  Planning on wiping the memory of the Bat Cave from the thugs memories with Green Lantern's help, the Dynamic Duo wonder if Superman can indeed make it as the non-powered Nova. 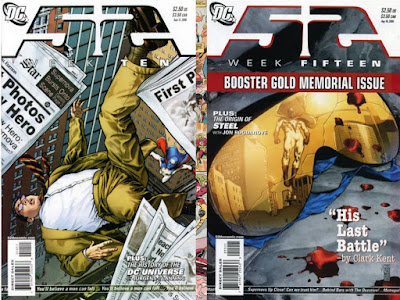 This wasn't quite the end for Nova, popping up in the Human Target feature in an issue of Action Comics Weekly (#641) as a movie hero (and person Christopher Chance had to save in the story), then being a mystery figure in the 52 series (with a slightly different costume, and new identity), a year long weekly series (in 2006/2007) dealing with the DC Universe (including a non-powered Clark Kent and Booster Gold).