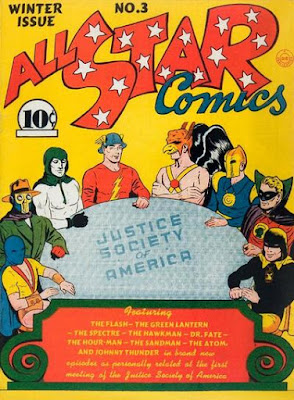 On November 22, 1940, in a hotel lobby, was "The First Meeting Of The Justice Society Of America" as relayed to readers in All-Star Comics #3 (Winter, 1940) under a cover by Everett Hibbard in a story by Gardner Fox.

The eight members there: Sandman, Spectre, Flash, Hawkman, Dr. Fate, Green Lantern, Hourman and the Atom formed the charter membership of the Justice Society of America, and was the first teaming of super heroes formed.

The story wasn't much of a team-up, but instead the heroes gathering to tell individual tales of their exploits (and the party was crashed by non-members, the original Red Tornado and Johnny Thunder as well).  Still, it was a good start. 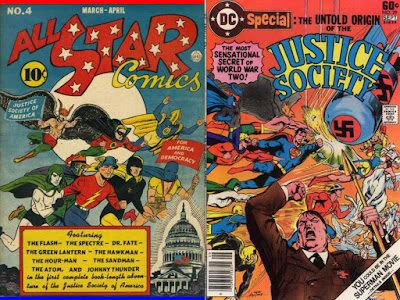 With the next issue, All-Star Comics #4 (March-April, 1941), the team began to work on the same case (though they'd go off on their own).  Soon after that, old members started to leave and new members would join....but readers had to wait until DC Special #29 (August-September, 1977) to get the tale of how these heroes (as well as Superman and Batman, who were too busy to be anything but honorary members in the 1940s) originally met for the first time. 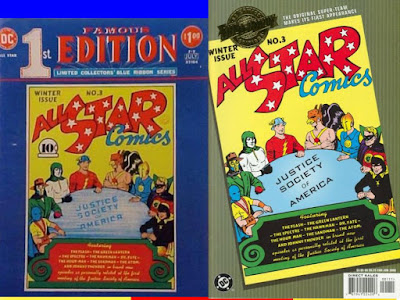 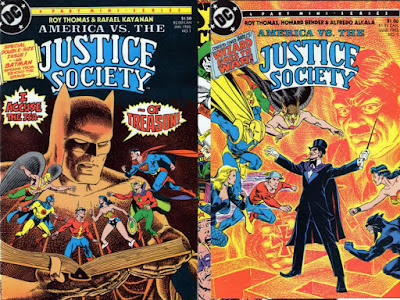 All-Star Comics #3 came out on November 22, 1940, and according to America Vs. The Justice Society, that's the date of the meeting as well.  The four issue mini-series from 1985 was a great source of information on the JSA (though DC didn't reprint the inner covers in the tradepaperback, lessening the helpfulness of the TPB, as Roy Thomas put extensive notes on the inner covers of the original issues, including where to find all the Golden Age reprints of JSA and individual JSA members stories (which has been updated for most members, like Starman and Black Canary, here).  The fact Roy was also born on November 22, 1940, is just luck! 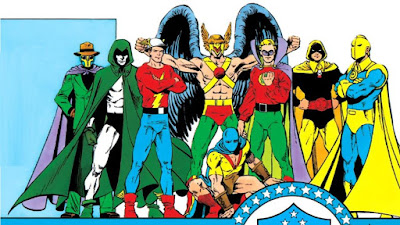 A comic that started the heroic tradition of team-ups and teams, something to be thankful for, as that tradition continues to this very day!
Posted by Dave's Not Here Comic Blog at 4:11 AM