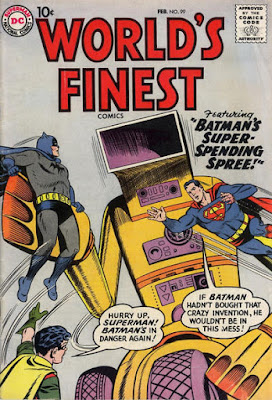 True, Clark Kent gets by on his reporter's salary, but he can't compete with Bruce Wayne, who, thanks to his parents and his hard work, has millions upon millions of dollars...so much money, that it is even like a super power of its own.

Even then, Superman does get a little worried when his friend over does it, with "Batman's Super-Spending Spree", the story of World's Finest Comics #99 (February, 1959), under a cover by Curt Swan and Stan Kaye. 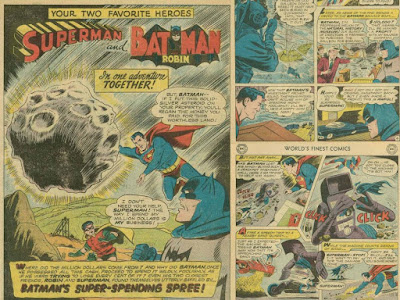 In the story by Bill Finger, Dick Sprang and Stan Kaye, Batman is behaving oddly, coming home to the Bat Cave with a million dollars, telling Robin of his plans to spend it, buying a bunch of businesses that fail almost as soon as he buys them.  This worries Robin enough to call for help from Superman, who starts making them profitable by using his super powers.

This is all against Batman's plan....Batman was trying to lose the money as part of a rider on a will, that he had to lose a large sum of money to allow the rest to go to the rightful heir of the fortune.  Superman sells his friend a bunch of useless trophies for a million dollars, allowing the will to be fulfilled. 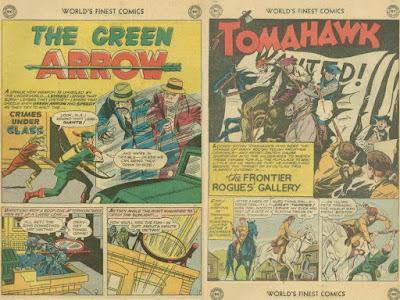 This issue also featured a Green Arrow story drawn by Jack Kirby and a story of American Revolutionary war hero Tomahawk, drawn by Fred Ray, with each hero fighting fearsome foes with the help of their young sidekick (Speedy for Green Arrow, Dan Hunter for Tomahawk).
Posted by Dave's Not Here Comic Blog at 3:30 AM