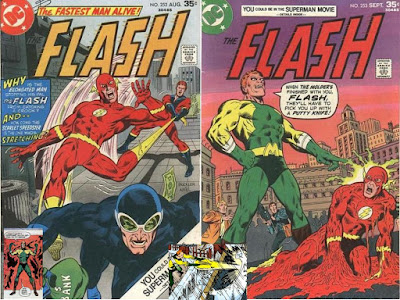 Flash and Elongated Man are some of the best of friends in the DC Universe, but even friends fight here and there.

After all, Flash and Elongated Man fought way back when the stretchable sleuth first appeared in the Flash's comic...but it was all just a misunderstanding.  Ralph Dibny wouldn't go truly evil...would he? 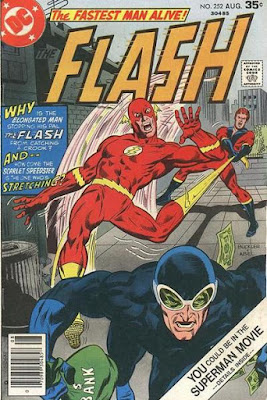 With a "Double Dose of Danger" in Flash #252 (August, 1977) by Cary Bates, Irv Novick and Frank McLaughlin (under a cover by Rich Buckler and Jack Abel), you might be inclined to rethink that thought.

Sue Dibny (Ralph's wife), came to Barry and Iris Allen for help, as her husband had disappeared after going undercover as a hood and disappeared quickly from their hotel room.  Barry explains to Iris he took Ralph away at super speed (while Ralph was drinking his Gingold, which gives him his stretchy powers) to capture the Chene Gang, which was pilfering Central City at that moment!  The two went to catch the gang, and caught one member, with the rest being holograms (or so they thought....as half of the money was still gone!).  Ralph investigated, and (in his criminal identity) found a twin, which had the rest of the money, and this pair planned another robbery at the airport.  Flash came to interfere, but ended up having to face the Molder....who was turning items into taffy (or at least as stretchy as taffy), but....why? 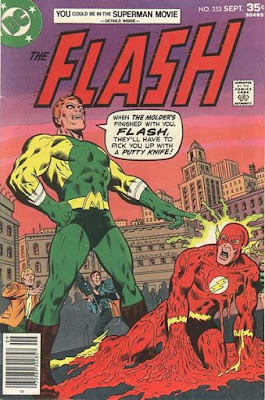 "Don't Mess With The Molder!" was the second part of this story, from Flash #253 (September, 1977) by Cary Bates, Irv Novick and Frank McLaughlin, covered by Rich Buckler and Jack Abel.

After the Molder melted Flash down (on live TV no less, worrying both Iris and Sue), the Molder melted the member of the Chene Gang too, to escape with the loot, and take a rest in a junkyard.  Meanwhile, Iris broke into the hospital and exposed the Flash "protoplasm" to electricity, which was enough to help Barry reform his body, then the two went home, after Barry went to collect some fungus from South America.  Readers found out the origin of the Molder...that the super speed charged Gingold warped Ralph's mind, so Barry went to collect a fungus that attacked the plant the Gingold was based on, hoping that may cure Ralph by temporarily neutralizing his powers.  Flash had to fight off Russian spies who were threatening Sue to get the Molder to do their bidding...where he got help from the Elongated Man (as Flash had injected him with the fungus formula, which restored Ralph's normal memories, then a little later, took his powers away for a bit).

The mystery of the Molder is solved!

But What About The Crisis? 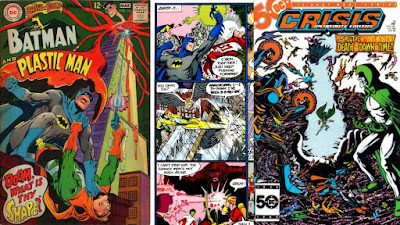 Inexplicably, the Molder showed up during a panel of the Crisis On Infinite Earths #10 (January, 1986) facing Hawkwoman and Tin of the Metal Men...stretching things a bit, theories came about that this was another Molder from an issue of Brave and the Bold featuring Batman and Plastic Man (#76, from February-March, 1968) wearing Ralph's evil costume.....or could have been a time-tossed Dibny from when he was the Molder, but who knows?

Something to think on....