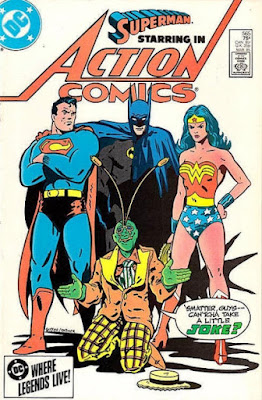 Instead of going with that other guy that usually fights Batman, here's a cover with Ambush Bug, finding out that humor is subjective, as Superman, Batman and Wonder Woman are not amused by what Irwin Schwab (Ambush Bug's alter ego) had said to them.

In Action Comics #565 (March, 1985) by Keith Giffen, Robert Loren Fleming and Bob Oksner, Irwin tried to recruit heroes for the premier of his own first issue....much to the chagrin of the heroes.