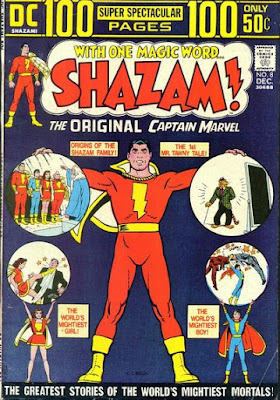 
....containing what was an incredible collection of the adventures of Captain Marvel and the rest of the Marvel Family from their golden years of Fawcett Comics.


Here's what was in the issue, under an original cover by Cap's co-creator, C.C. Beck. 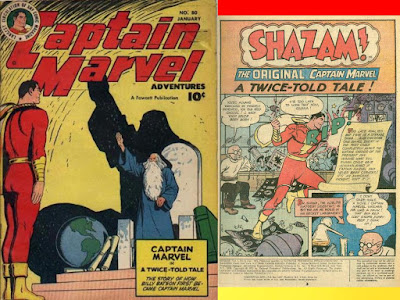 Sivana has a plan in Captain Marvel Adventures #80 (January, 1948) by Otto Binder and C.C. Beck, that is, to go back in time to prevent Billy Batson from ever becoming Captain Marvel.  So, he invents time travel pills, and takes one just as Captain Marvel comes into his current lab....only Sivana forgot one thing, that, if he was changing time, he'd not know why he was going into the past.  Forgetting that, Billy's meeting with the wizard Shazam went as it usually did, with the lad becoming Captain Marvel! 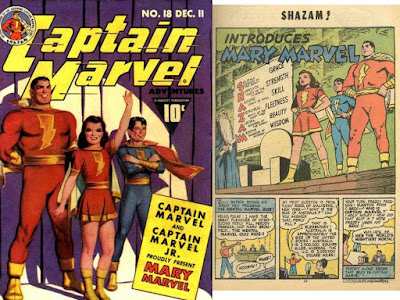 This time around, Otto Binder and Marc Swayze give the story from Captain Marvel Adventures #18 (December 11, 1942) where Billy finds his unknown twin sister, Mary, and from nurse Sarah Primm, learns that she had been switched out for another family's dead daughter.  Meeting Mary Bromfield at the Mental Marvel Quiz Show, the young rich girl does well, and ends up kidnapped for ransom.  Billy and Freddy get captured and gagged, but Mary tries saying "Shazam" and gets a heroic identity of her own (as later revealed, as the old Wizard had planned). 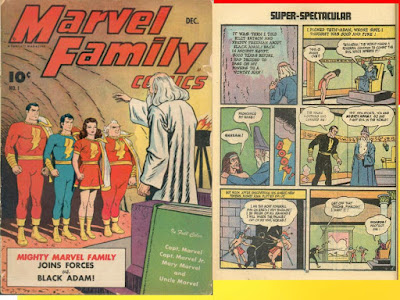 Cap, Mary and Jr. form a Marvel Family, but they meet a distant relative in Marvel Family #1 (December, 1945) by Otto Binder and C.C. Beck, in a previous recipient of Shazam's power, Black Adam.  Teth-Adam had been granted the power as Mighty Adam in the days of ancient Egypt, but used it to take control, and was banished to the farthest star by Shazam.  Now called Black Adam, this evil Marvel returned, but was stopped by the quick mind of Uncle Marvel! 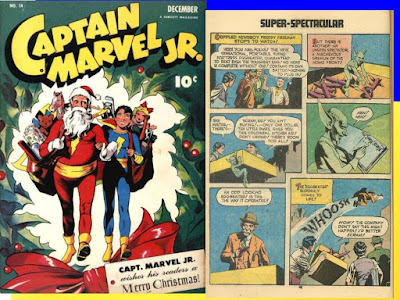 A mischievous gremlin empowers the items of a street vendor in  Captain Marvel, Jr. #14 (December, 1943) by artist Mac Raboy, causing trouble for Captain Marvel Jr..  Jonas Weatherby gets the ability to fly with an egg-beater (!!!), and uses it to rob a bank.  But, Freddy Freeman's alter ego tracks the man down, and convinces him the error of his ways, that you can't steal from others to enrich yourself. 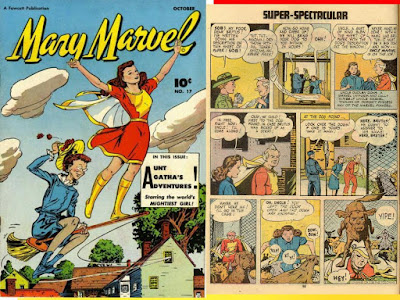 Poor Mrs. Upcreek comes to Shazam Inc. to find someone to get her missing dog, Brutus, in Mary Marvel #17 (October, 1947) by Otto Binder and Jack Binder.  Mary and Uncle Dudley quickly get on the case, stopping a group of dog-nappers via Uncle Marvel's usual misfires (and Mary Marvel's timely interventions), but....have no luck finding Brutus....until Uncle Marvel gets a biting pain reporting back to Mrs. Upcreek!

The Adventure In Time 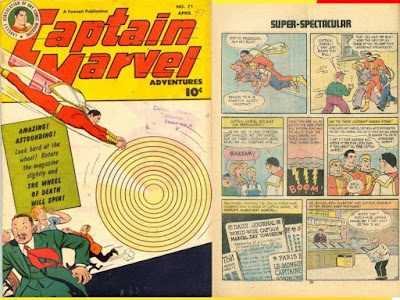 Billy Batson finds an impossible adventure for Captain Marvel in Captain Marvel Adventures #71 (April, 1947) by Otto Binder, C.C. Beck and Pete Costanza....that of having to be in four parts of the Earth at the same time.  Thankfully, the Lt. Marvels are around, and Fat Marvel, Hill Marvel and Tall Marvel can take three of the assignments as Billy takes the fourth as Captain Marvel. Of course, that just means Sivana has to figure out a way to cause problems at the same time as well... 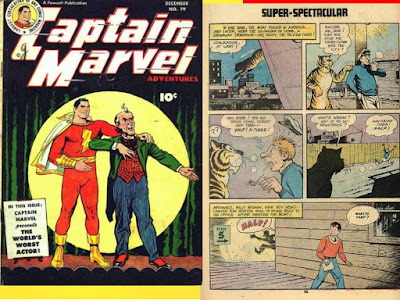 An old hermit talks to a tiger, and he talks back in Captain Marvel Adventures #79 (December, 1947) by Otto Binder and C.C. Beck.  The tiger leaves the hermit behind to try out civilization, but runs across Captain Marvel, who thinks he's a wild animal on the loose.  Still, the tiger persists, and eventually gets clothes and a chance to talk to Cap, who then finds the tiger a job so he can be a productive member of civilization.

The Return Of Mr. Tawny 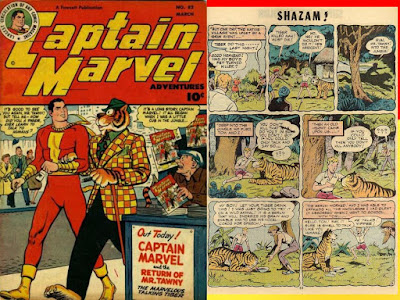 The tiger gets a name, that of Mr. Tawny in Captain Marvel Adventures #82 (March, 1948) by Otto Binder and C.C. Beck.  Better still, Billy befriends the tiger, and learns of his origin (just in time, as the boy who saved the tiger's life in Africa, and got him to the old hermit who gave him the formula to talk; Tom Todd, was framed for murder, just as Mr. Tawny was years ago).  Captain Marvel and Mr. Tawny had to work extra hard to find the real killer. 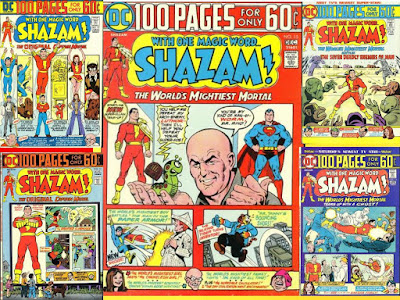 A super collection of Captain Marvel Golden Age Fawcett goodness (with history of Shazam and his Marvel Family, Tawky Tawny, Black Adam and more)....enough to start what would be a nice run of reprints in Shazam!, though the others would also feature new stories as well!

Posted by Dave's Not Here Comic Blog at 9:57 AM