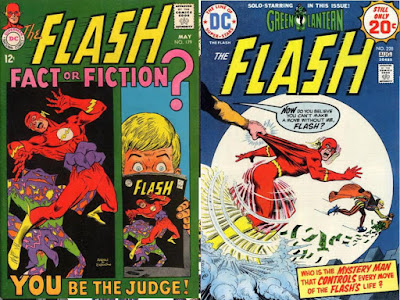 Imagine, if you will, a world where super heroes were only fictional, appearing in comic books!

You don't have to imagine it, it is the Earth known as Earth-Prime, and Flash took a run there!

Here's some of the story of Earth-Prime!

The Flash -- Fact Or Fiction? 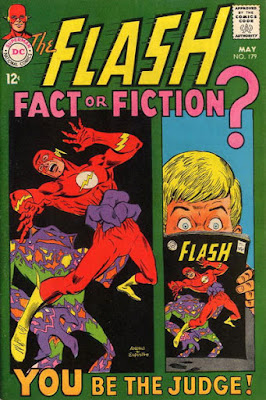 
Backtracking a bit, it seemed like a normal day for Barry Allen...

...facing off against an alien creature who seemed to appear wherever he was, meeting the alien hunter who had trapped the creature, finding out the creature was the Nok, given a time limit in which to catch the creature, then facing some ordinary museum thieves...

...at least until the Nok showed up there, too! 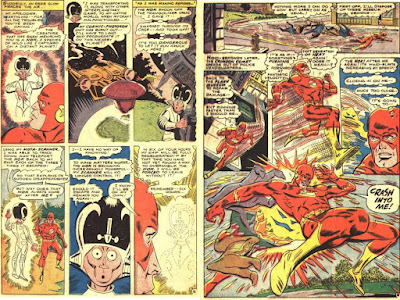 In trying to save the thieves, Flash had to vibrate at unusual frequencies, which caused him to end up on a parallel world.  No problem, Barry had ended up on the world of an alternate Flash (Jay Garrick) and could just head home.  Except....it didn't work this time. 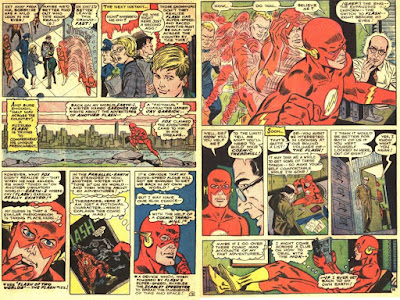 Plus, the people of this world recognized him, as Barry Allen, the Flash!  Seems this world only had super-heroes as comic book characters, and proven, as a kid showed him a comic written by Gardner Fox!  Not having a lot of space to carry more than spare change, Barry went to the offices of DC Comics, where he met with editor Julie Schwartz.

With a quick super speed change, convinced him that he was the real thing.  Barry stayed and read comics while Julie went out to get the parts needed to build a Cosmic Treadmill, which would allow Barry to speed back to his own Earth, which he did. 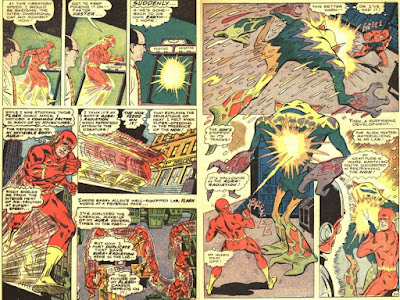 Then, back home, Barry realized why the Nok was following him....it was feeding on his super-speed aura.  So, Barry whipped up a gun to produce that aura, attracted the Nok with it, then turned him over to the alien hunter (with Julie Schwartz having an idea for a new story for the Flash back on his Earth).


The Day I Saved The Life Of The Flash 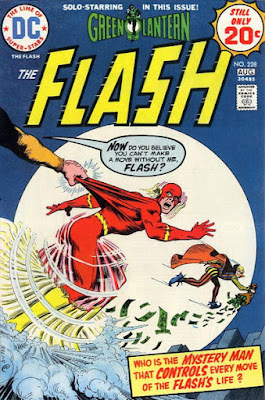 Cary Bates wrote Flash #228 (July-August, 1974), and starred in it as well, but Irv Novick and Tex Blaisdell provided the interior art, with Nick Cardy giving readers the cover of the issue.


This time around, Cary Bates (who wrote the previous tale as his first outing as a Flash writer, soon after, becoming the regular writer for the Flash) was driving around Ohio (with just a little problem of driving too fast) when he found his way into a mysterious fog...


...which transported him all the way to another Earth, and to Central City, instead of his original destination of Athens, Ohio. 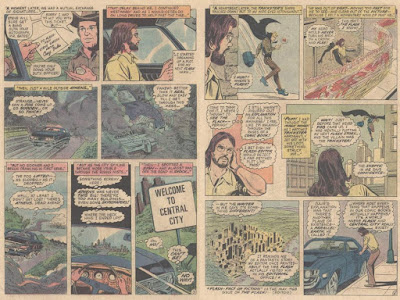 Cary quickly recognized the skyline as one drawn many times by Carmine Infantino and Irv Novick, and realized he was in Flash's Central City, just as the Trickster burst out of a bank he was robbing!   Realizing that Trickster was starting a plot that Cary had had,

Cary went to the home of the Allens, and, with a little work, convinced Barry that he was who he said he was, putting the Flash on the trail of the Trickster.

Flash confronted Trickster, but was stopped by the new gimmick the Trickster had, that of a hypnotic yo-yo, which caused Flash to forget who he was facing. 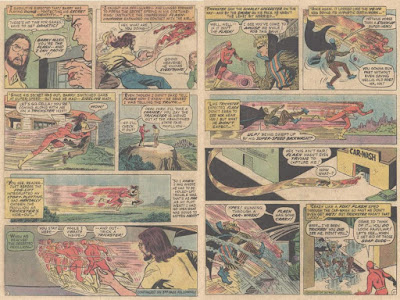 Cary had dreamed up that menace for the Flash, but had yet to think of a way to stop it.

So, Cary thought of a new robbery for Trickster, which the Trickster performed, then Flash showed up, and found a way to prevent James Jesse from making a clean getaway.


Thanking Cary for his help beating the Trickster, Cary used his "plotting power" to create the fog again, and drove home, knowing he'd have a new story for the Flash (not unlike how Julie Schwartz did). 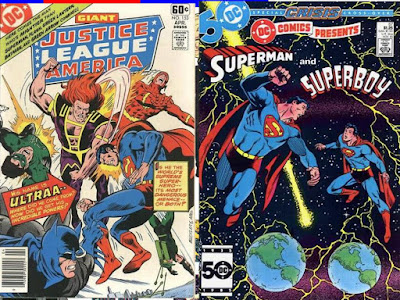 Now, the saga of Earth-Prime didn't end there.

Earth-Prime came back for a JLA/JSA team-up (where that Earth was named, and Cary returned there), as well as introducing two super-heroes of its own, Ultraa and Superboy!

But, Earth-Prime didn't fair so well during the Crisis On Infinite Earths....
Posted by Dave's Not Here Comic Blog at 3:33 AM