Lois Lane Tries Out Being Batwoman 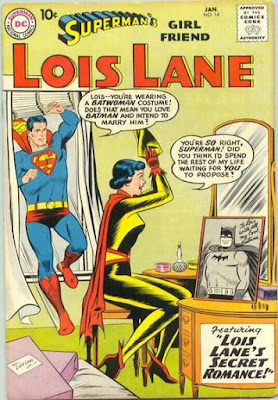 Lois Lane has assumed some pretty interesting jobs over the years as an ace reporter for the Daily Planet, but she really tried something different with a new look in Superman's Girl Friend, Lois Lane #14 (January, 1960, under a cover by Curt Swan and Stan Kaye).....


....as she tried out Batwoman's look in a ploy to hook Batman? 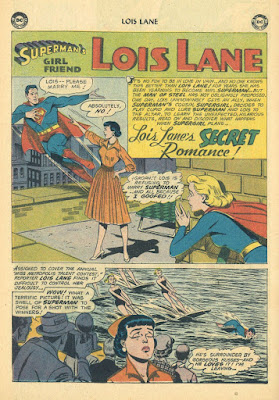 To be fair, this story by Jerry Siegel and Kurt Schaffenberger doesn't really feature Batwoman (or even Batman), but it does feature her costume, and it's Supergirl's fault!

Supergirl tried to help out her cousin, who wasn't getting any closer to Lois Lane, and figured if Clark married Lois, the two could adopt her and get poor Linda Lee (who was Superman's secret weapon at this time) out of Midvale Orphanage.

Supergirl first tries painting Lois' face on billboards for Clark to see, then works on a dinner, then a relaxing boat ride, but, Superman's super responsibilities tend to get in the way of any romance between Lois and Superman. 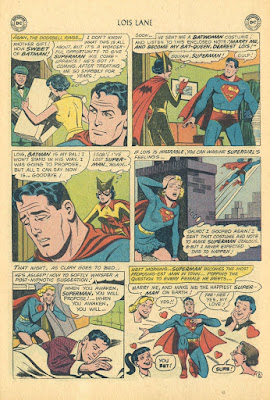 Supergirl even tries copying Batman's handwriting and sending love letters to Lois as Batman (as well as a Batwoman costume for her to wear....).  None of this really works, and Supergirl girl tries subliminal programming on Clark to get him to propose to Lois...but it works too well!

Supergirl realizes her efforts are too much, and stops trying to interfere in her cousin's life.

This story was reprinted in Lois Lane Annual #2 in Summer, 1963, and many of Supergirl's main life events were reprinted in Supergirl Action Giants!  Sadly, the original Batwoman and Supergirl seemed to have never met!