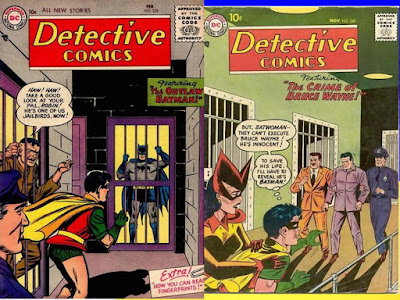 True, readers know that Batman is there to uphold the law, but, at times in his career, Batman has ended up on the wrong side of prison bars.

Here's a couple of quick examples from early issues of Detective Comics! 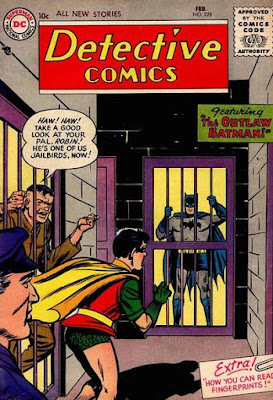 Batman gets hit in the head fighting some crooks in Detective Comics #228 (February, 1956) by Bob Kane and Charles Paris, with a cover by Win Mortimer.

Luckily, Robin gets him to a doctor, who insures he's okay, treating the Caped Crusader.  Over the next few nights, Batman works on his own, committing robberies instead of stopping them!  Robin follows him the next night, stopping him, waking Batman out of a trance.   Taking him back to the doctor, the doctor says there is no way to prevent Batman from being a thief, so he should go to jail.  Batman exposes the doctor as Spade Stinson, a crook who gave Batman pills that that turned him into a thief.  Batman, after a days of not taking the pills, reverts to his normal self.

The Crime Of Bruce Wayne 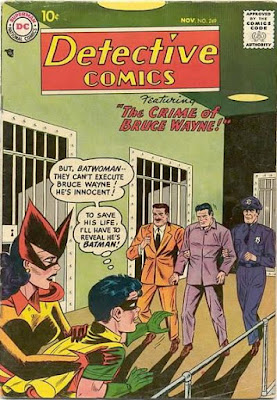 It is Bruce Wayne working for Commissioner Gordon in Detective Comics #249 (November, 1957) by Bill Finger, Sheldon Moldoff and Charles Paris, with a cover by Sheldon Moldoff.

Wayne goes undercover in a prison as the criminal Collector, with Gordon as the only one on the outside who has proof of his innocence, so Bruce can find who is planning an escape.  In prison, Bruce finds escape plans with Squint Neely, who dies in an accident....but Bruce is accused of his murder.  Robin, recruiting Batwoman for help, go to find the real Collector, to clear Bruce (when Gordon is incapacitated).  The duo find the Collector in just in time to prevent Bruce from being executed, and he is cleared of all charges and released.

Two issues showing where people jumped to conclusions early, assuming the good guy was a bad guy!
Posted by Dave's Not Here Comic Blog at 3:33 AM