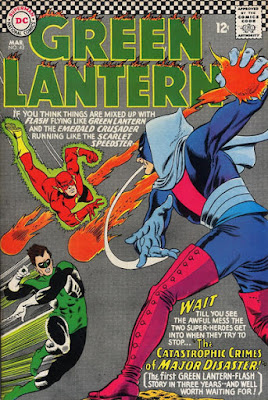 True, this was the first appearance of a brand new villain, Major Disaster, as well as a Flash and Green Lantern team-up, which had happened before....but, something was a little different about this one, as there was a little switch with our heroes!


Here's the story as it unfolded in Green Lantern #43 (March, 1966) under this cover by Gil Kane and Murphy Anderson, in this story by Gardner Fox, Gil Kane and Sid Greene! 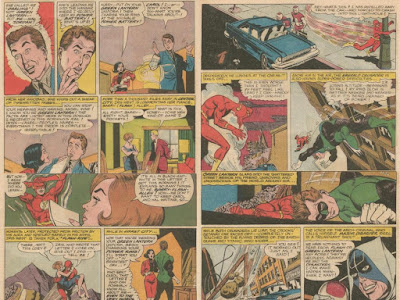 Hal Jordan has a problem with Carol Ferris, as she loves Green Lantern....but today, she reveals that she knows Hal IS Green Lantern.  Iris West is Barry Allen's fiancee, but....today she tells him about his speedy alter ego of the Flash.  The girls convince the boys to suit up and head to Pineaire City (only wanting to reveal to each other their boyfriend's alter egos).  But, then, disasters pull the super heroes away from their dates....and, as they are stopping the problems, they find Major Disaster and his henchmen robbing businesses, and are unable to stop them, as their powers seem to have disappeared.

Major Disaster sent the letters to Carol and Iris, to keep the heroes busy.  Major Disaster wanted to remove their powers permanently, but could only switch Flash's aura with Green Lantern's ring charge.  Green Lantern and Flash head back to Coast City, so Hal can charge his ring and they can check Hal's confidant, Thomas Kalmaku, and his casebook, in which he records all the details of Green Lantern's adventurers (including Barry's identity).  Barry, after dusting for prints, finds two pair, Tom's and Paul Booker's. 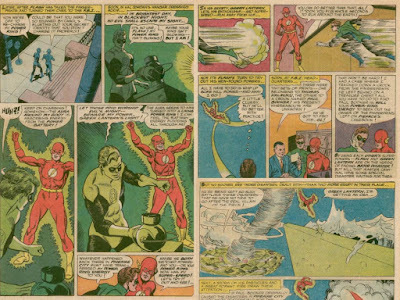 Then, when Hal and Barry go back to recharge Hal's ring, Barry begins to glow, while Hal manifests super speed.  After getting use to their new abilities, the two go to confront Booker (the alter ego of Major Disaster, who found Tom's book by accident while fleeing police; then, he convinced some scientists to build machines for him to threaten Coast City and Central City).  Barry saves Coast City from more disasters with green energy, while Hal beats Major Disaster and his scientists, which switches their powers back. 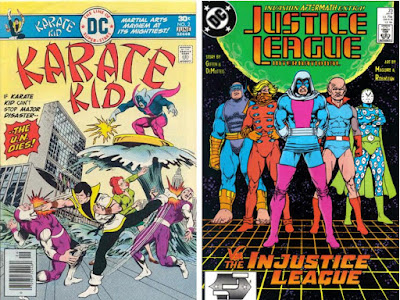 Trying to use his machine again, Major Disaster forgets his protect from the disastrous effects....and it appears to be disaster for him (as well as causing amnesia for the residents of Coast City, including Carol and Iris).  Major Disaster didn't finish himself off, and came back to menace Green Lantern and other heroes in the future!