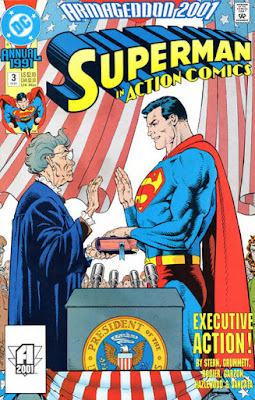 Faster than a speeding congressman, more powerful than a filibuster, able to leap tall monuments in a single bound...


....it is Superman as President of the United States!


Taking advantage of the alternate futures that Waverider was able to project when touching your favorite DC heroes in the 1991 Armageddon 2001 Annuals, readers get to see what a Superman presidency would be like in Action Comics Annual #3 (1991) by Roger Stern, Tom Grummett, Phil Rodier, Carlos Garzon, Doug Hazlewood and Brad Vancata under a cover by Dave Gibbons.


After a brief battle with Kalibak of the New Gods and a conversation with Metron, Superman goes to have a date night with Lois (as Clark Kent), when Waverider arrives to see Superman's future. 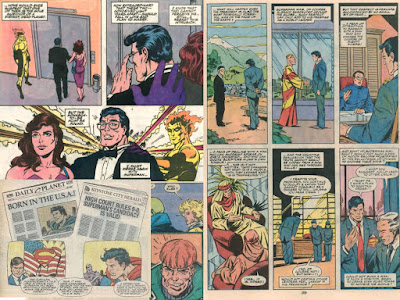 In this future, Pa Kent dies in a horrible accident on the farm, prompting Ma Kent to move to Metropolis, Clark and Lois to get married, and Pete Ross to run for President.  After a nearly successful attempt on Pete's life by Intergang, foiled only by Clark Kent (who exposes his duel identity in public to save his friend), Pete convinces Clark to run for President in his place.  After having the Supreme Court rule Superman is an American (as his birthing chamber was also his rocket, meaning Superman was born in the USA), Superman runs for and wins the Presidency.  Clark settles the national debt with help from Aquaman (finding old sea treasure), has Luthor arrested for plotting to kill him, and unites the world's heroes to help all mankind.

Not the bleak future where Monarch ruled that he was looking for, Waverider leaves Superman (who prevents this future by being slightly distracted, and going to save Pa Kent from being crushed by a tractor).
Posted by Dave's Not Here Comic Blog at 4:30 AM