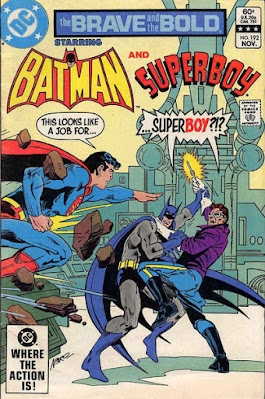 Ever have one of those days, where you just feel out of time, not like yourself, as though you just lost years of your life, and are trying to catch up as quickly as you can?

Believe it or not, even Superman has those days....and, here is the story of a time when he had one of those days, and how his friend, Batman, had to work with Superman's younger self....Superboy!

You Can Take The Boy Out Of Smallville... 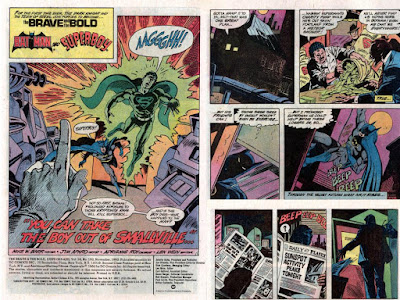 In this great little story by Mike W. Barr and Jim Aparo in  Brave and the Bold #192 (November, 1982), it starts off like any issue of World's Finest Comics might, with Batman tracking down some criminals in Gotham who had committed a crime in Metropolis.  Batman calls for his friend Superman...but, a twist this time, as Superman arrives glowing....and changes into....Superboy? 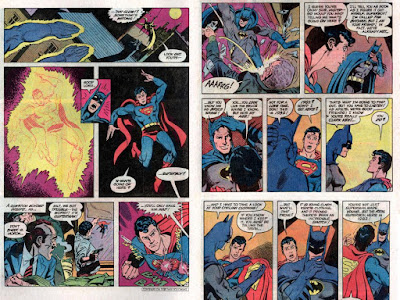 Superboy quickly flies into action, taking out the thieves (with a little less concern for the surroundings than Superman might have had).  Batman, the master detective, identifies himself to his newly younger friend, and checks him out, to figure out he is indeed the younger Superman (confused as to why he is here, as is Superman, back at the Kent house, fifteen years earlier).

Superman (and Superboy) try to time travel home...but neither have success.

Batman, after advising the Teen of Steel to think more, and be less impulsive, takes him along to investigate why this happened.  A quick check of electronic sales records finds one person who sold electronic parts to power a time machine. 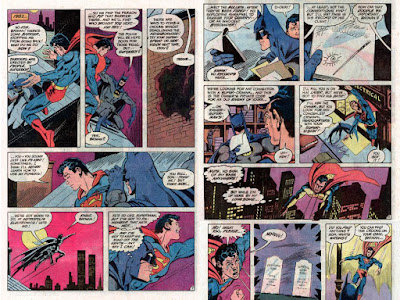 After another criminal encounter (with the youth acting a little too quickly), Batman, trying to keep Superboy busy, sends him to look for possible headquarters (but, this backfires, as Superboy checks on the Kent farm, and sees his adoptive parents graves, a tragic life event that helped change a Superboy into a Superman).

Distraught, Superboy returns to Batman demoralized, yet Batman encourages the young man to live up to their memory and soldier on, looking for lead-lined possible secret headquarters. 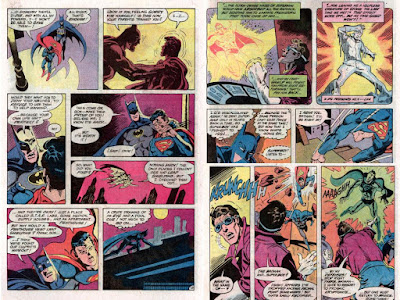 Finding the base, Batman goes in, realizing his foe is I.Q.....Ira Quimby, a Hawkman  villain who has high intellect powered by the sun, who sent Superman into the past to prevent Superman's Kryptonian form from absorbing solar radiation from solar flares coming to the Earth (and increasing his intelligence even more)....but, miscarried a decimal point, sending Superman to Superboy's time (and, this time), time travel rules prevented one person from being in one time sending Superboy here.

Superboy charges in to stop I.Q., but, as Batman feared, I.Q. was ready with a Kryptonite beam, but Superboy miraculously shruggs it off, going to stop the solar flare as Batman deals with I.Q.  After, Superboy returns, explaining he took advice from Batman, borrowing some lead shielding from the HQ to protect him from I.Q's Kryptonite.  The solar radiation he absorbed seemed to destroy the barrier preventing him from going home, and headed home (not to remember this adventure, likely due to Saturn Girl's Legion of Super-Heroes edict to prevent Superboy learning of his future from time travel), with Batman ready to explain to his pal, Superman, what had happened. 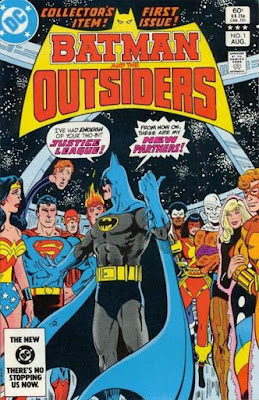 A joyous tale of friendship and an odd "first meeting" for the pair, though Superman and Batman would later find their relationship strained, as Batman quit the JLA to form the Outsiders (with Barr and Aparo showing how well Batman could train new heroes....after a little encouragement from his young partner, Robin, from when the Titans/Outsiders teamed-up).