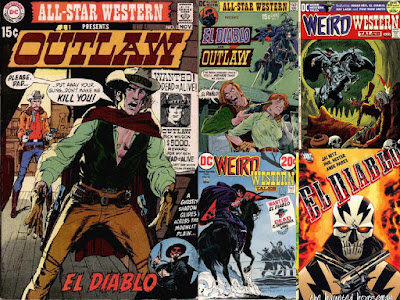 El Diablo started out as a demon that possessed Lazarus Lane, a bank teller in the old west of the 19th Century, who had nearly been killed by bank robbers, then struck by lighting, put in a coma and revived by the medicine man, Wise Owl (with his adventures starting in All-Star Western #2, October-November, 1970, by Robert Kanigher and Gray Morrow), with El Diablo rising to mete out vengeance at night, taking over the body of Lane for early issues of All-Star Western and Weird Western Tales (with his origin in All-Star Western #3 of December-January, 1970/1971), being an occasional back up in later 1980s issues of Jonah Hex... 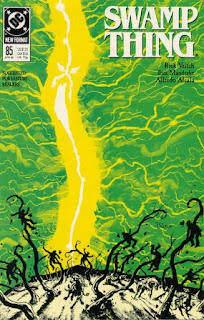 ...until in Swamp Thing #85 of April, 1989, Jonah Hex, the western Johnny Thunder, Madame .44 and a few others ended the life of Wise Owl, all observed by the Alec Holland version of Swamp Thing, while traveling back in time, with the events of November 7th, 1872 in the story, "My Name Is Nobody" by Rick Veitch, Tom Mandrake and Alfredo Alcala supposedly freeing the paralyzed Lazarus Lane from Wise Owl's influence as well as the demon that possessed him (though that later turned out not to be true). 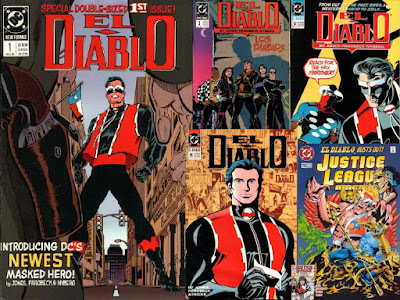 The second El Diablo was Rafael Sandoval, a novice politician in the later 20th Century town of Dos Rios, TX, who was trying to help the town, and realized he could do so better adopting the name of a local legend, and using his athletic ability in secret to fight crime as El Diablo, starting with El Diablo #1 (August, 1989) by Gerard Jones and Mike Parobeck. 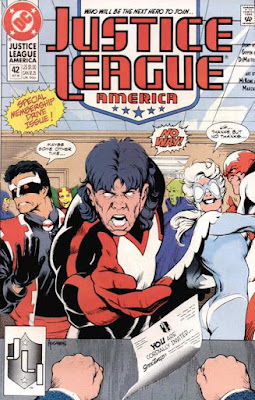 That fight lasted 16 issues, battling local crooks and inspiring the kids of the neighborhood to do good, and even working with the original Vigilante, and later, when working with the Justice League, Rafael was temporarily possessed by a demon, retired for a time and came back briefly during the Villains United event, but was ill-prepared for the onslaught of villainy, especially with no powers and no recent training, though he did survive the event, barely.

All this serves as a prelude to the current holder of the El Diablo name, Chato Santana, who first appeared in the mini-series, El Diablo in 2008.


The Curse Is Passed On 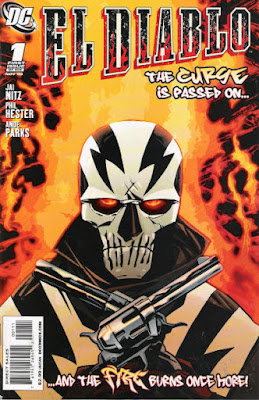 El Diablo #1 (November, 2008) by Jai Nitz, Phil Hester and Andre Parks introduces us to Chato Santana, who is the leader of Los Reyes Locos, a Los Angeles gang, who is working with H.I.V.E. (a villainous group known for fighting Superman and the Titans).  Chato gets shot as the police raid a weapons buy, ending up in the hospital, where he meets two patients....one, Bob Olsen, who is crazy and kills his roommates, and the other, an old man named Lazarus Lane, whose hasn't moved in years, but won't die (and people put in rooms with him die mysteriously).  Chato also finds he is now paralyzed, and will not cooperate with police, especially Alex Aaron, who then puts out word Chato is cooperating so his gang will come and kill him.  They do try, and this gets Chato to change into El Diablo to take out the murderers (after a conversation with Lazarus Lane on the spiritual plane).  El Diablo (Chato, mobile while transformed and fiery) and Lazarus leave the hospital on a hell horse (Sombra by name), leaving Bob behind, whose voices told him that he was to be El Diablo.  Bob gets approached by another demon... 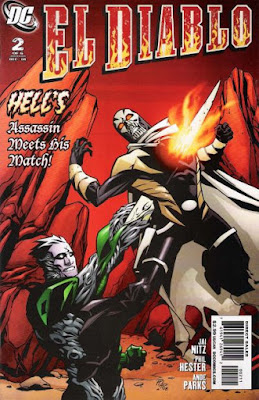 El Diablo #2 (December, 2008) by Jai Nitz, Phil Hester and Andre Parks has Alex Aaron finding out Chato and Bob have escaped, then the narrative follows the new El Diablo to the desert, where Chato changes back to his human self, with Lazarus explaining the abilities of El Diablo to him (though the full flaming and demonic horse weren't something Lazarus himself used back in the 19th Century).

Lane tells of the 16th Century conquistador Vincente De Zaldivar, who Lazarus was unable to defeat (making him the first foe the new El Diablo must beat).  Chato also comes to terms with being paralyzed when not El Diablo, Bob reappears as the demonic Vorpal, and El Diablo learns from Alex Aaron that Chato's second in command was an undercover cop (Israel Martino, known in the gang as Jorge Ramos) gone bad. 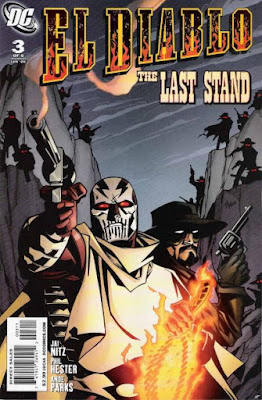 El Diablo #3 (January, 2009) by Jai Nitz, Phil Hester and Andre Parks has El Diablo dealing with the Council (villainous group that clones troops, and faced the Manhunter and the JSA), H.I.V.E. and Intergang (a group of villains Superman usually faces), because these groups are all now working with Jorge.  All the while getting help from Lazarus (who is being stalked by Vorpal, who eventually kills Lazarus...

Chato also catches and kills Jorge, and Vorpal shows his trophy, the head of Lazarus Lane to Ninhursag (the demon that gave Bob his mystical blade and powers). 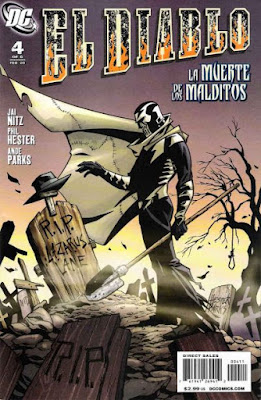 El Diablo #4 (February, 2009) by Jai Nitz, Phil Hester and Andre Parks sees El Diablo saving a child, and taking Jorge's ill-gotten gains, which include incredible amounts of money and false identities, which allows Chato to set up a safe house, do some research and get handicapped accessible transportation.  Chato also reconnects with his ex-girlfriend, Jules, as the one person he feels he can trust to help him with this.  Chato finds that the demon bound to him is called Chutriel, who rebelled with Lucifer, had the job of meting out punishment, and is the lover of Ninhursag.  Chato and Jules are surprised at home by Alex Aaron, who explains the group he is now facing, Cerberus, made up of members who left H.I.V.E., the Council and Intergang.  El Diablo goes to one of their facilities to find most of the men killed, but that Vorpal had them clone monsters to attack people, including killing Jules.  Alex Aaron reveals he works for S.H.A.D.E., a U.S. government backed super agency, and that its enforcers, the Freedom Fighters, are being enlisted to track down the spirit of vengeance, El Diablo. 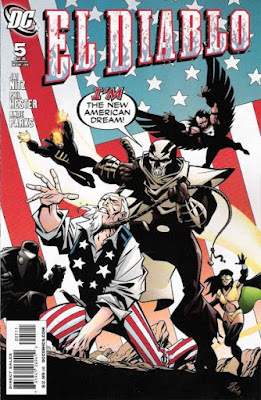 El Diablo #5 (March, 2009) by Jai Nitz, Phil Hester and Andre Parks starts with a confrontation between El Diablo and Vorpal at the Hollywood sign, that soon gets interrupted by the Freedom Fighters.  The heroes battle both mystically powered men, but don't do so well, with El Diablo shooting Human Bomb (and taking out the Ray in the resulting out of control blast), Vorpal wounding Black Condor (as Black Condor senses the demons inside both), El Diablo fighting Uncle Sam as the spirit of vengeance takes on the spirit of America (with America coming away beaten), and only by the luck of Phantom Lady's blacklight projector is the demon Chutriel exorcised from Chato...

....to the delight of Vorpal, as Chutriel can now unite with Ninhursag to father the demon that will end the world.  The Freedom Fighters gather up to take the now powerless Chato into custody, and worry for the fate of the world. 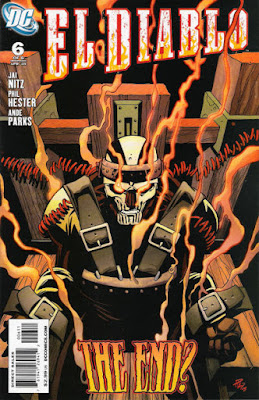 El Diablo #6 (April, 2009) by Jai Nitz, Phil Hester and Andre Parks starts with the electrocution execution of Chato....where the headless spirit of Lazarus Lane shows up to explain that his beginnings also involved lightning...

....Chato escapes prison as El Diablo, going to face Vorpal and Ninhursag in the depths of the Earth, and her child, Ghatanothoa (whom Ninhursag wants El Diablo to kill, as the lady demon decided she doesn't want everything to end.....).

Ghatanothoa makes El Diablo a counter offer, to be his general and help bring about the end times, which Chato refuses, and with Vorpal's help, ends Ghatanothoa.  Chato realizes who he was has died, crawls out of the hole he was trapped in, and accepts his new role as a demon who hands out vengeance on men as bad as he was....ending the short saga of El Diablo for a time..... 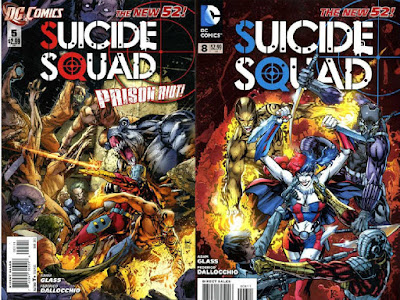 ...though the DC Universe seemed to change around the character, and El Diablo ended up as a member of the Suicide Squad, using his hellfire powers to help end evil amongst others who committed evil.