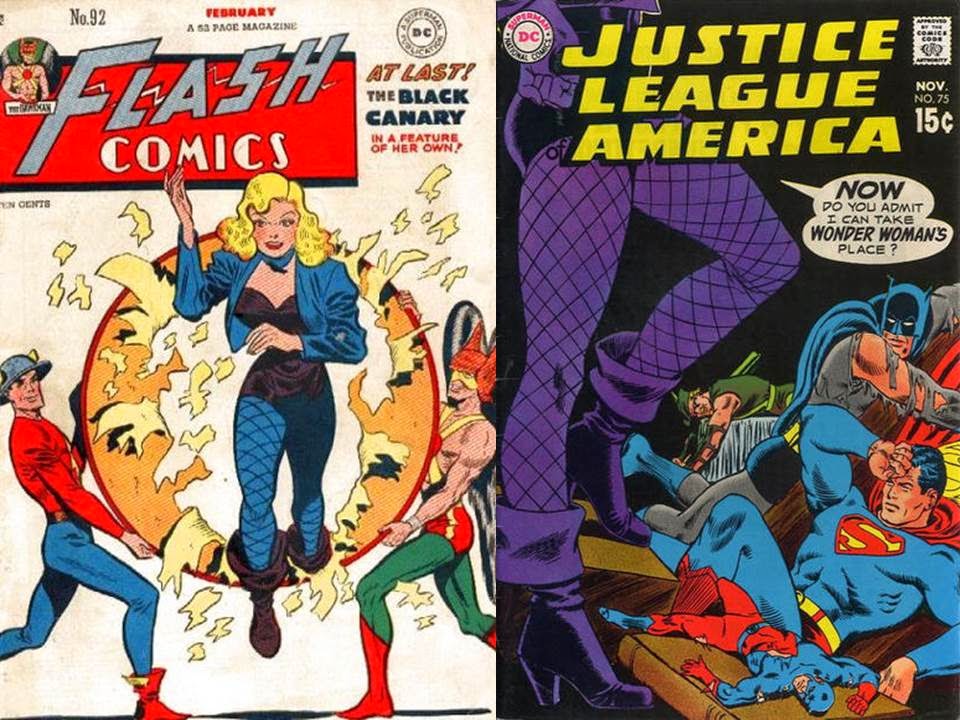 Black Canary first appeared in the Golden Age of comics in Flash Comics #86 (August, 1947) in the Johnny Thunder back-up (written by Robert Kanigher and drawn by Carmine Infantino), though she took over the feature in Flash Comics #92 (cover by Infantino).  Black Canary was in Flash Comics #86-104 (and even had one story later presented in DC Special #3), and even took over Johnny's spot in the JSA from All-Star Comics #38-57.  Black Canary joined the JLA with Justice League of America #75 (October, 1969, by Denny O'Neil and Dick Dillin, and cover by Infantino and Murphy Anderson), though technically that was the original's (Dinah Drake Lance) daughter (Dinah Laurel Lance), and she now had her sonic weapon, the "Canary Cry". 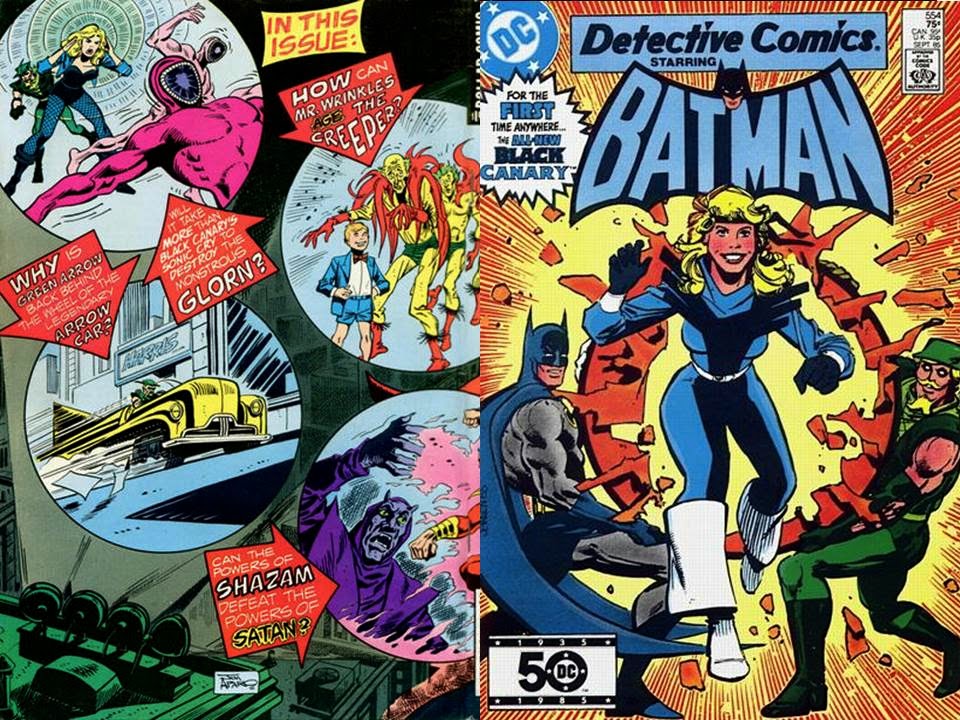 Mostly, the new Black Canary was a guest or supporting character, working as a member of the JLA, and working with Green Lantern and Green Arrow in Green Lantern's book.  Dinah then was in back-ups with Green Arrow in Action Comics, World's Finest Comics, and Detective Comics, as well as team-ups in Brave and the Bold and DC Comics Presents, and a small feature in Action Comics Weekly. 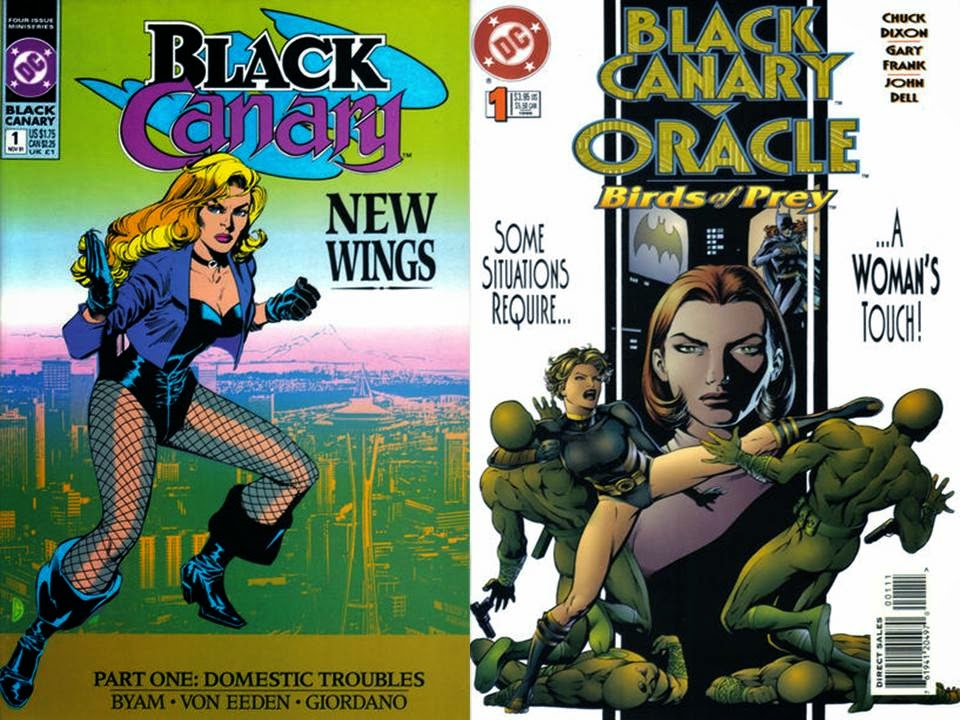 Black Canary did break out on her own, first in a 4 issue mini-series by Sarah Byam, Trevor Von Eeden, and Dick Giordano (which led into a 12 issue regular series)....and even later, working with Barbara Gordon (the former Batgirl, Oracle at this time) in Black Canary/Oracle: Birds of Prey #1 (January, 1996 by Chuck Dixon and Gary Frank), which led to a few Birds of Prey mini-series and regular series...with Black Canary in most of them (except when she was in Green Arrow/Black Canary, and in the various JSA and JLA titles).

All this, and Black Canary has made it to live-action television as well! 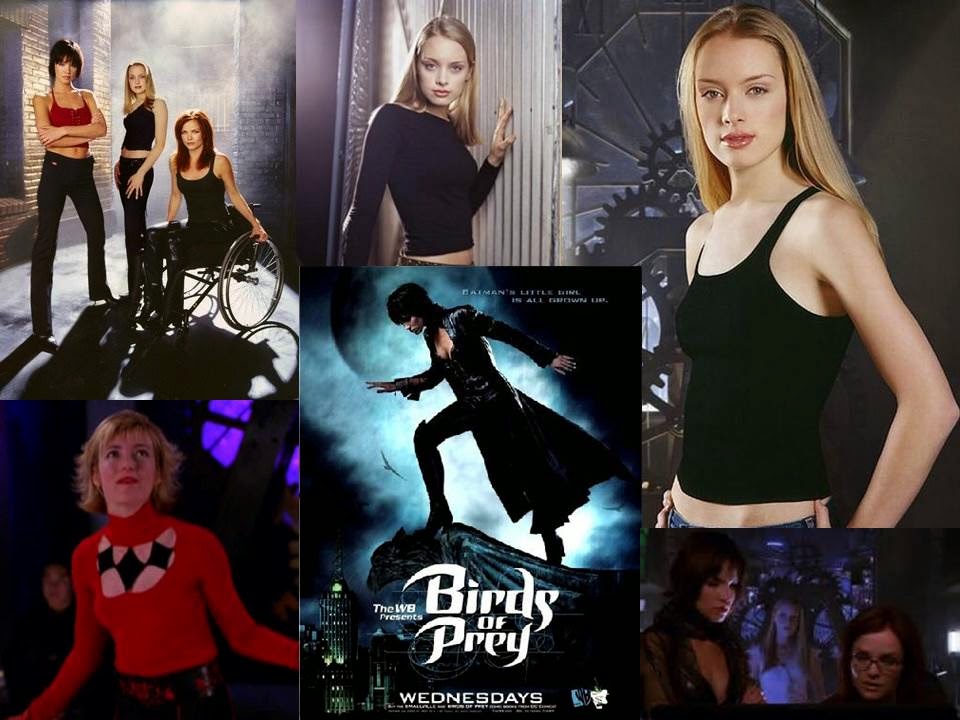 Black Canary's first series  was as the junior member of the group gathered together to protect Gotham in Batman's absence in the WB's Birds of Prey (from October 9, 2002 to February 29, 2003).  These heroines include Helena Kyle (the Huntress, played by Ashley Scott), Barbara Gordon (former Batgirl, played by Dina Meyer) and Dinah Lance (teenage runaway with uncontrollable telekinetic powers, played by Rachel Skarsten...).  Developed by Laeta Kalogrids, the series was an odd mix (using Huntress as Batman's daughter from pre-Crisis On Infinite Earths days), the most modern (at the time) take on Barabra Gordon as Oracle, and our first look at young Dinah's high school days. 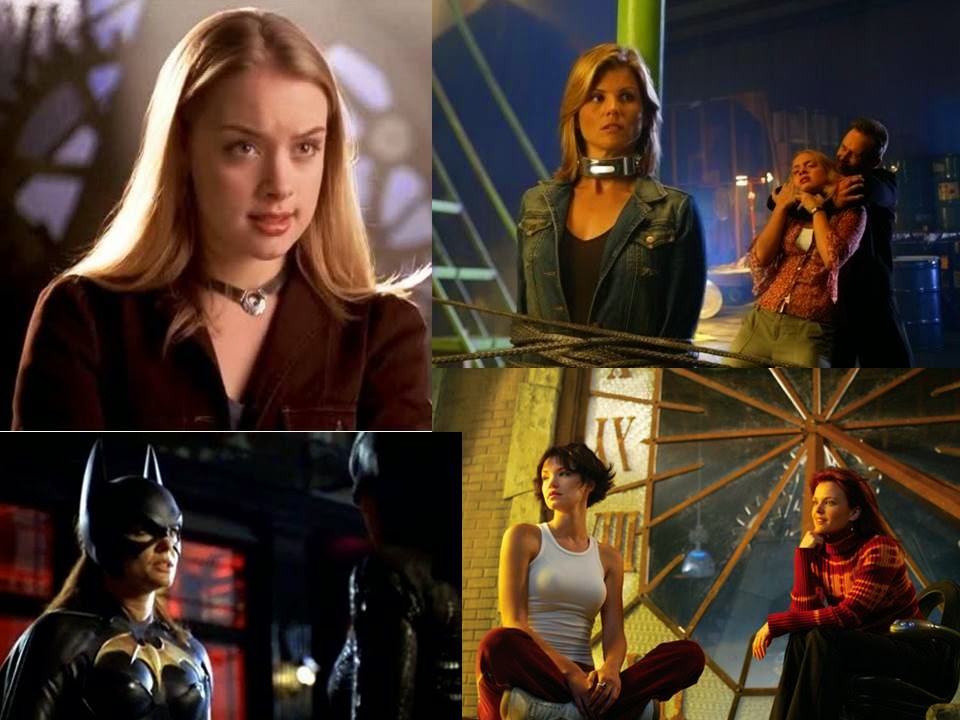 It was an odd mix (and even had Mia Sara as Dr. Harleen Quinzel (aka Harley Quinn), and a visit from Dinah's mom, Caroline Lance (played by Lori Loughlin, who was the first Black Canary!).  Lacking real costumes, it was still in the early days of super-powered people on TV, and couldn't quite find an audience in its one season of 14 episodes (ironic for what soon followed...).

Sadly, the show couldn't seem to find an audience...after all, who would want to watch a series set in Gotham without Batman? 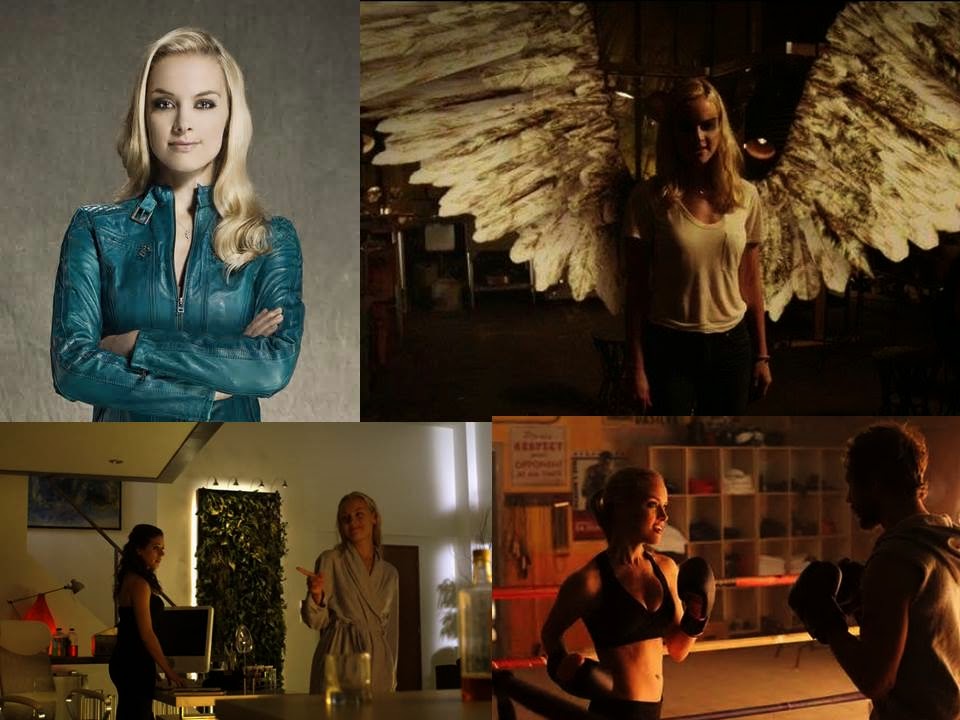 Rachel Skarsten did well after, going back and finishing high school and college before coming back to acting on series like Flashpoint and the L.A. Complex, and movies like the Vow.  Most recently, Rachel has been a regular on the series Lost Girl about the Fae (beings of supernatural origin) split into light and dark factions, and fought by Bo (series star Anna Silk), who refuses to choose a side.  Rachel plays Tamsin, a Dark Fae, who joined the cast in season 3, as a partner to Dyson (Light Fae werewolf cop, one of Bo's lovers, played by Kris Holden-Reid), and helped turn Bo's life upside down (but has been more help in the fourth season....and more!). 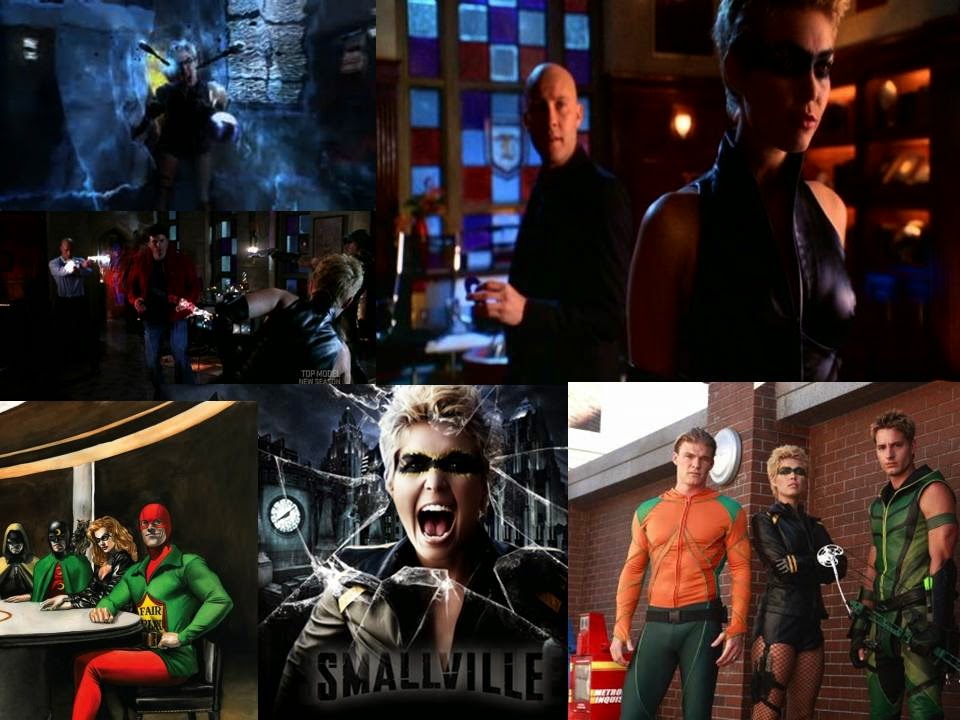 Slightly more successful than Birds of Prey, Smallville premiered on October 16th, 2001, and ended up running for 10 seasons, focusing on the pre-Superman life of Clark Kent (Tom Welling).  Season 6 saw Clark meeting Oliver Queen/Green Arrow (Justin Hartley), and that led to the season 7 episode of February 7th, 2008 (written by Kelly Souders and Brian Wayne Peterson, directed by Kevin Fair), called Siren...in which we met the Black Canary!  Black Canary (played by Alaina Huffman) was there as an agent of Lex Luthor (Michael Rosenbaum), trying to take out Green Arrow and his team that had interfered with Luthor's operations across the globe. 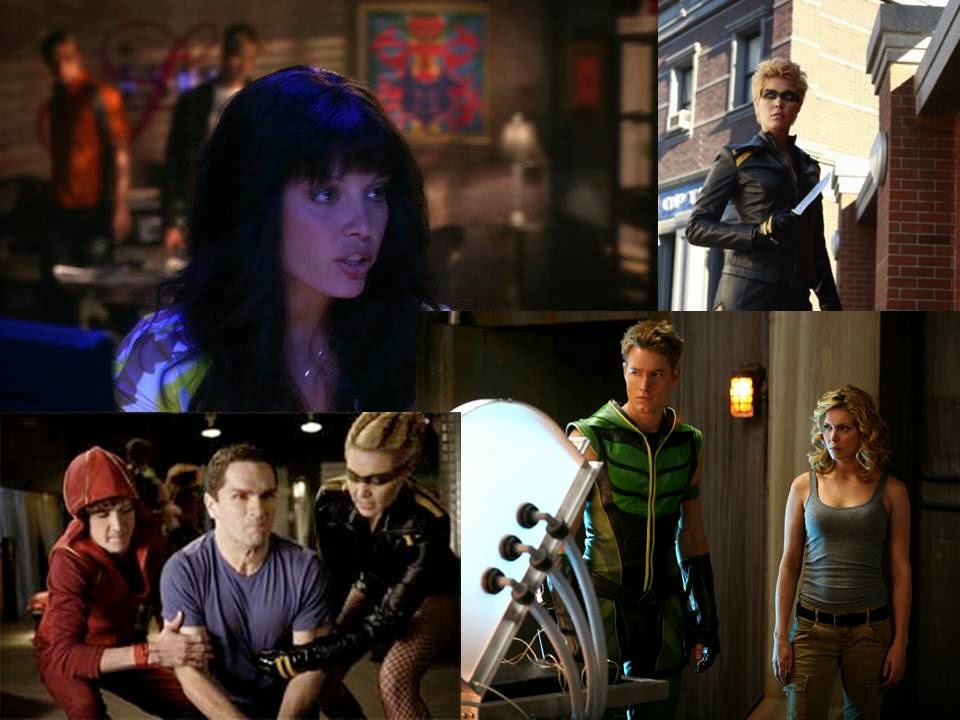 Black Canary was really Dinah Lance, right wing radio host, who was into fighting crime in a blond wig and using weapons and her sonic scream.  After being convinced Green Arrow was not the villain, she joined up with Green Arrow's pre-Justice League (with Aquaman/Arthur Curry played by Alan Ritchson, Impulse/Bart Allen played by Kyle Gallner and Cyborg/Vic Stone played by Lee Thompson Young), returning in season 8 in Odyssey and Doomsday, season 9 in Salvation and season 10 in Icarus and Collateral.  Her costume was more like the modern Black Canary of the comics of the time, yet there was also a Black Canary with the Justice Society of America, but no link to her and Alaina's Black Canary was made. 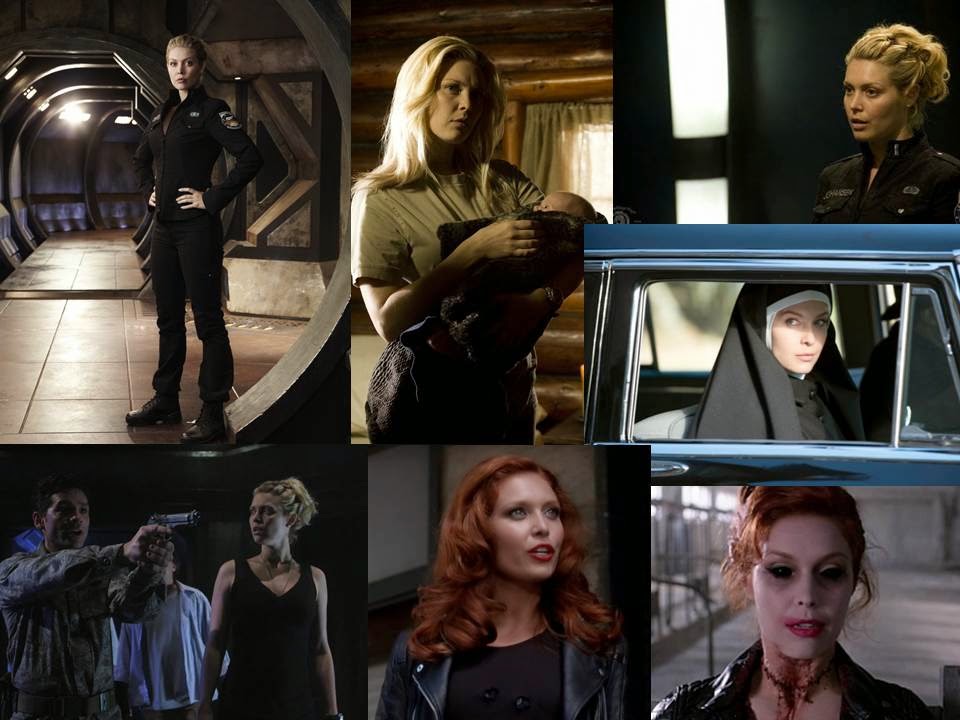 Alaina Huffman continues to work steadily to this day...taking on a permanent role as blond Lt. Tamara Johansen on SGU Stargate Universe (that lasted from 2009 to 2011, wherein a Stargate took a military crew and some civilians to a ship far across the universe, but without the power to return home).  Alaina is currently working on Supernatural as red-headed Abaddon, one of the demons faced by the two brothers (Sam and Dean Winchester, played by Jared Padalecki and Jensen Ackles) who hunt demons on the CW show. 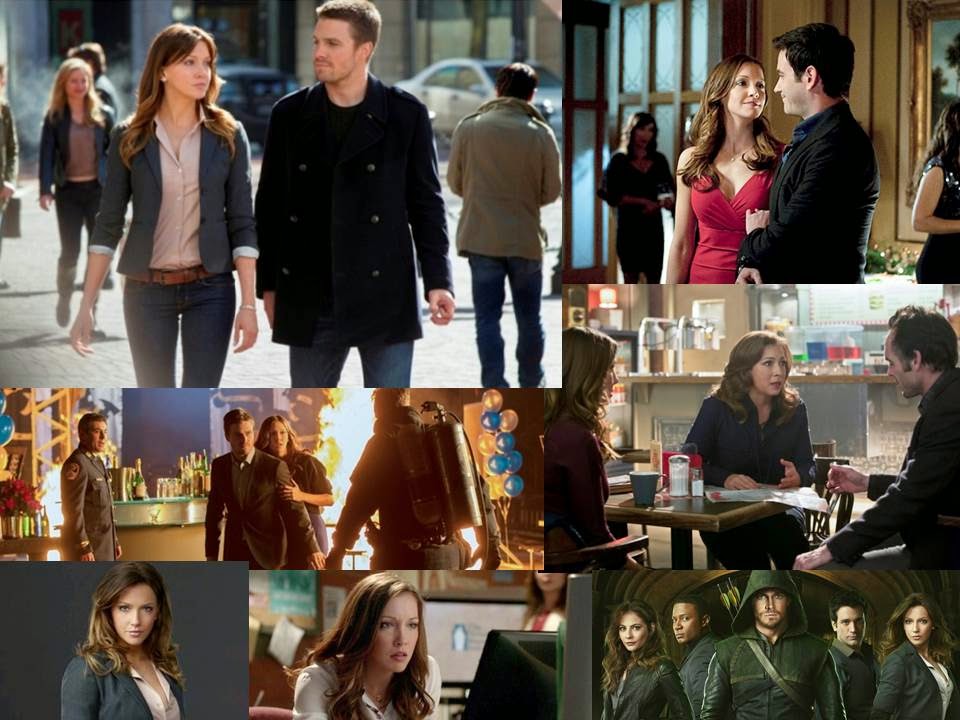 The current home of the Black Canary is on the CW's Arrow show, but it took a while for Black Canary to develop.  There was a little teaser to start with...Katie Cassidy was called Laurel Lance in the first episode (not revealing her full name until the end, Dinah Laurel Lance, the lady that should have been Black Canary...).  Instead, Laurel is the ex-girlfriend of Oliver Queen (secretly "the hood", played by actor Stephen Amell), left behind when he went on his boating trip (that got him stuck on the island, and eventually turned him into the hero). 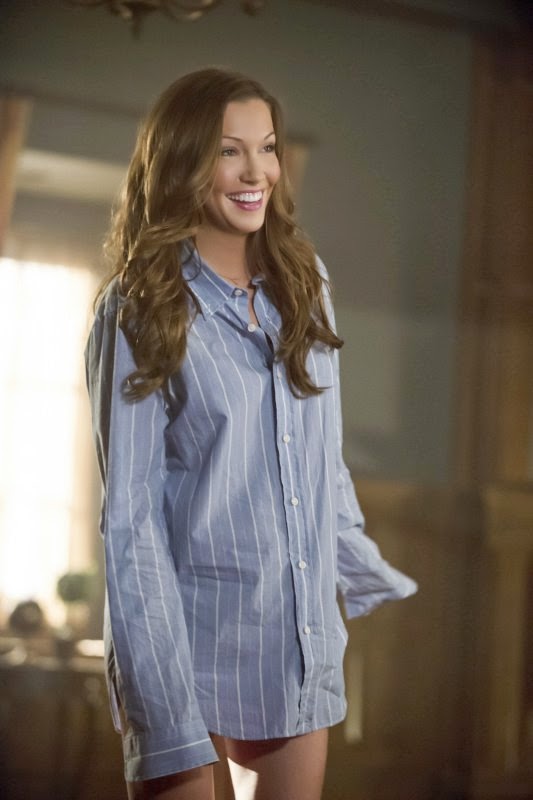 Laurel also had to deal with Ollie taking her younger sister along (Sara), whose death Laurel's dad (police detective Quentin Larry Lance, played by Paul Blackthorne) blames him for.

Lauren became a lawyer while Ollie was gone, and losing Sara also helped to break up the Lance family (though Dinah Lance, Laurel's mom, did come back thinking Sara was still alive....and was played by Alex Kingston).

While Laurel was in the action here and there, mostly she just caused complications for Ollie (and was sleeping with his best friend, Tommy Merlyn, played by Colin Donnell).

Laurel then suffered some more tragedy as well... 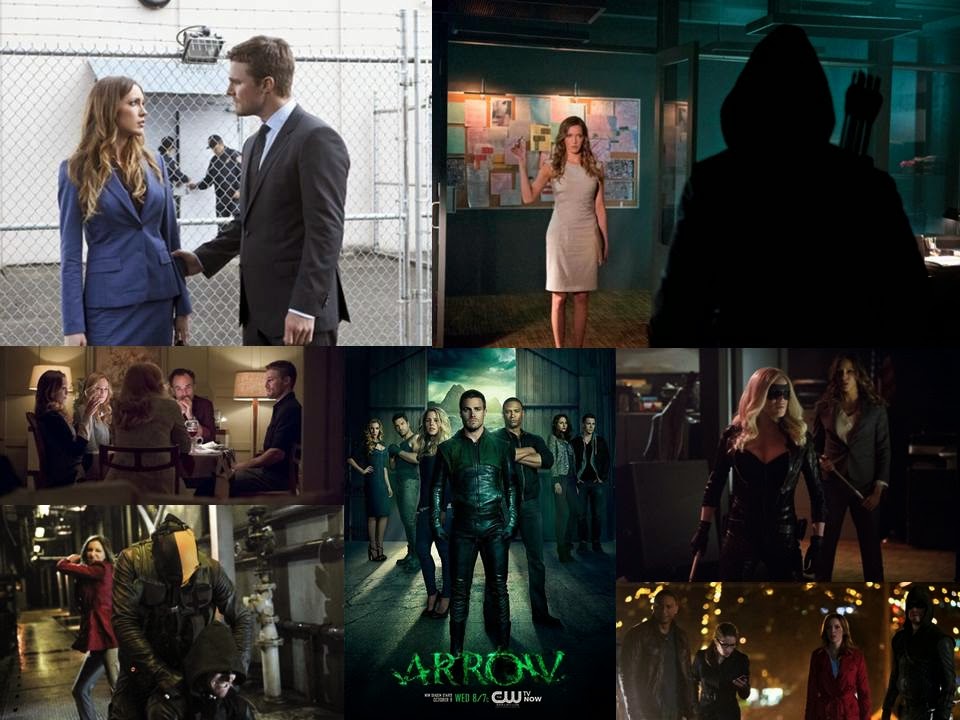 The second season rolled around and Laurel's life just seemed to get worse and worse.  While Laurel did get a job working for Starling City's District Attorney, she lost CNRI (the City Necessary Resources Initiative), as well as having Ollie disappear for a time (she had grown closer to him at the end of Season 1).  The Canary also arrived in Starling City....and Arrow found out that...it was Sara!  Always believe your mom, as Dinah was right, Sara did survive, working as a member of the League of Assassins (and played by Caity Lotz in Season 2; for her brief appearance in Season 1, she was portrayed by Jacqueline MacInnes Wood, and those scenes were reshot in Season 2 as how Sara survived and found her way to the island and Ollie was explored). 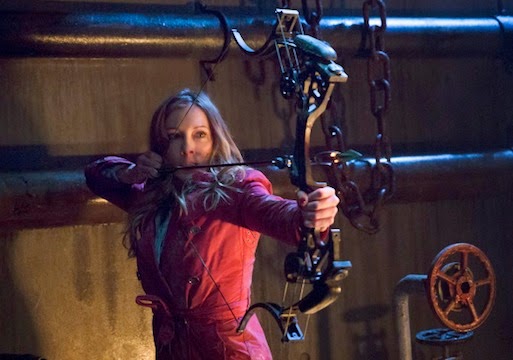 Sara's return (and getting back together with Ollie) helped Laurel's life spiral out of control, but Laurel was always a fighter, and fought to get back all she lost.  Sara spent her time in Ollie's city, fighting crime as well as the Canary (with martial arts and mechanical sonic cry bombs).  Laurel also learned of Ollie's identity, and even helped out during the end attack on Starling City, and both of the Lance sisters fought for redemption.

With Sara leaving the city, she gave Laurel the Canary jacket (and likely...the identity of Canary for season 3!). 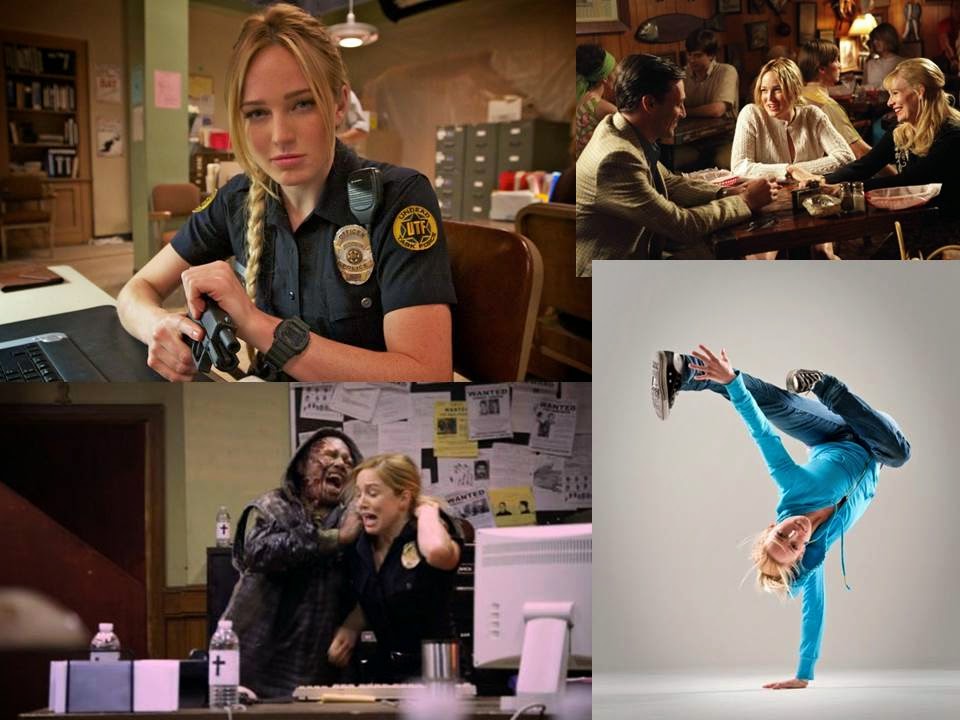 Caity Lotz played Officer Kirsten Landry on the MTV series Death Valley (and faced all sorts of supernatural threats...) in 2011.

Caity was also a part of Don Draper's past as Stephanie on Mad Men.  Part of the reason she was so graceful as the Canary is her history as a dancer! 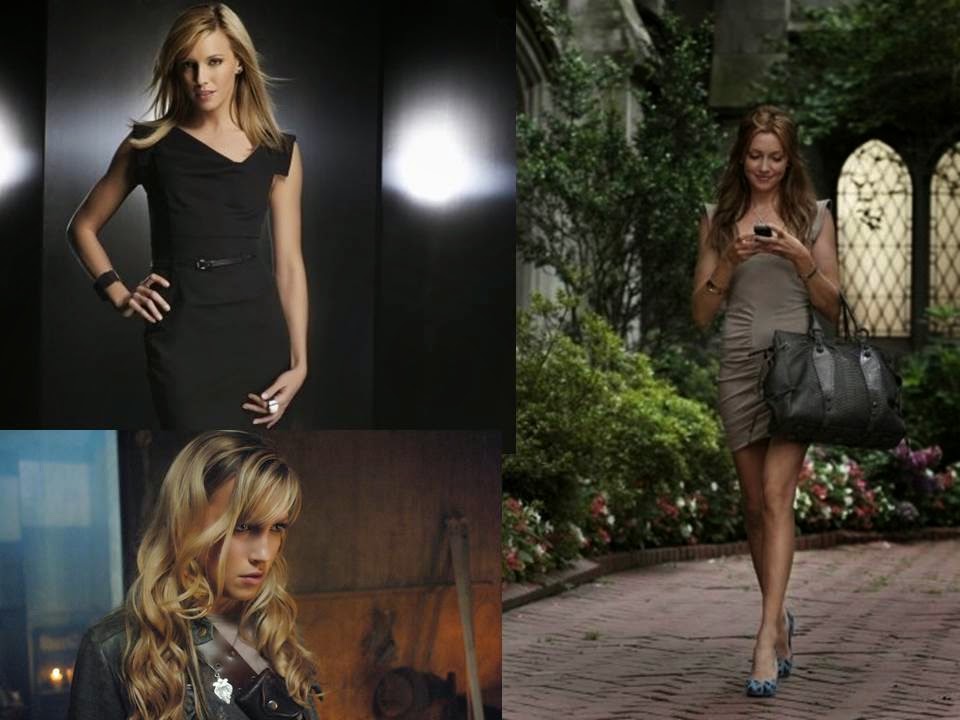 Katie Cassidy is a very happy lady, enjoying her time on Arrow. Previous long running roles of hers include Ruby on Supernatural, Ella Simms on Melrose Place and Juliet Sharp on Gossip Girl. 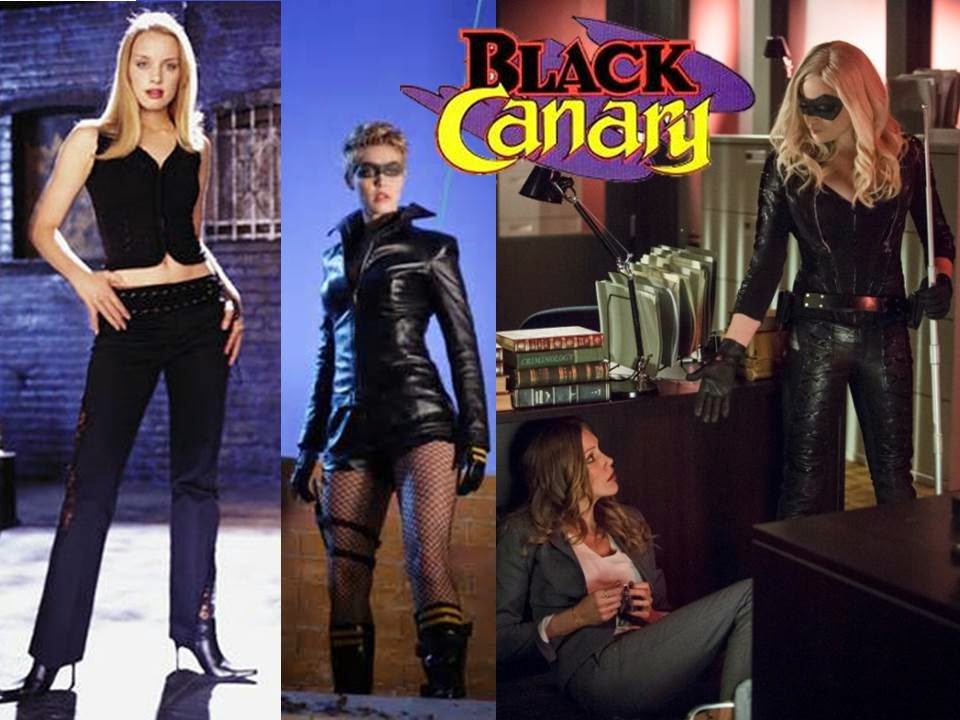 With luck, maybe some of these previous Black Canaries can take time out from their busy schedules to visit on Arrow as well?

Heaven help Ollie if these pretty birds flock around him (though it would make the fans very happy!).