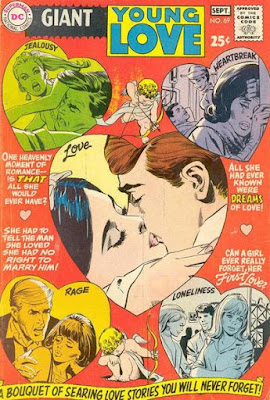 Young Love #69 (August-September, 1968 with cover by Dick Giordano) was Young Love's one and only giant, squarebound issue (though the series did have 100 Page Spectaculars towards the end of its run), full of jealousy, rage, heartbreak, rage, loneliness and even love (all as it says on the cover)...all gathered from past issues of other romance comics!

Here's a look at the issues that have stories from them reprinted within...

Tears For A Dream/Heartbreak In Paradise 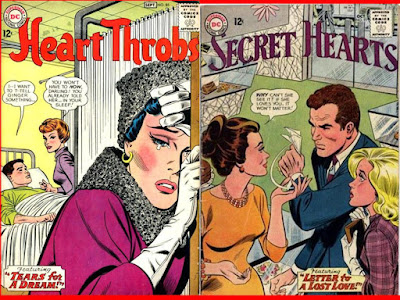 This cover of Heart Throbs #85 (August-September, 1963) is by John Romita, and actually features the Dream story reprinted in the giant, while the Paradise story was only inside Secret Hearts #91 (October, 1963), but the cover was also drawn by John Romita! 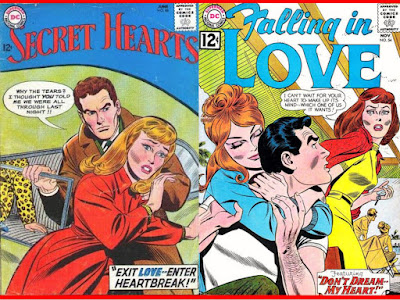 John Romita provides the covers for both Secret Hearts #88 (June, 1963) and Falling In Love #54 (November, 1962), though A Shoe doesn't feature on the cover, nor Moment or Curtain on its either...but you can definitely see the Romita style on the women's faces!

To Hide From Love/Forgive Me, Forget Me 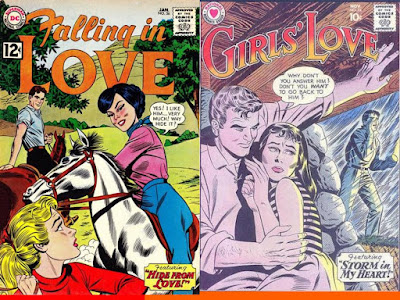 Arthur Peddy might have started the cover for Falling In Love #56 (January, 1963), with Romita finishes, but John Romita did all of Girls' Love Stories #74 (November, 1960), neither of which were the cover feature of the issue that they came from either! 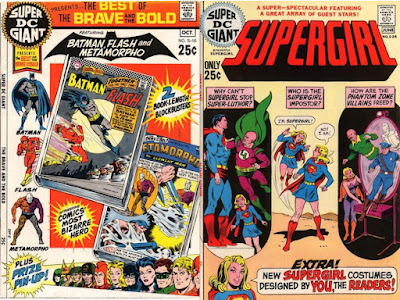 Plus, the issue had "Mad Mad Modes For Moderns", with fashion art by Jay Scott Pike (creator of Dolphin), and could be considered one of the first dozen Super DC Giants (which oddly started with the number, S-13...and include volumes with Supergirl, Batman team ups, Jerry Lewis and even more romance comics for Valentine's Day!).