President George Washington Is A Hit 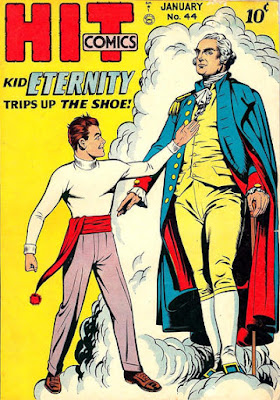 Celebrating the Presidents' Day, with George Washington, the first President of the United States, with this cover of Hit Comics #44 (January, 1947) by Al Bryant, featuring the hero, Kid Eternity, who has the powers to bring back those no longer with us, simply by saying "Eternity" in the presence of his mentor, Mr. Keeper.

Here, he gets help from Washington against the Shoe (even in the Golden Age, they had begun to run out of names for villains!).