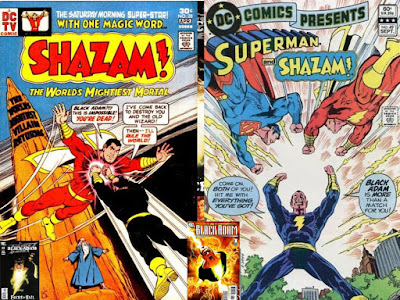 Captain Marvel is Billy Batson, a young boy the wizard Shazam found, convincing the lad to say his name and gain his powers.  As Captain Marvel, Billy faced the evil scientist, Dr. Sivana, but while the world's wickedest scientist did keep Earth's mightiest mortal busy....who could match him physically?

Well, the answer to that was in Shazam's past, as he tried to create a champion before Billy, in ancient Egypt, having Teth-Adam say his name, to become the Mighty Adam, later to be known as.....Black Adam! 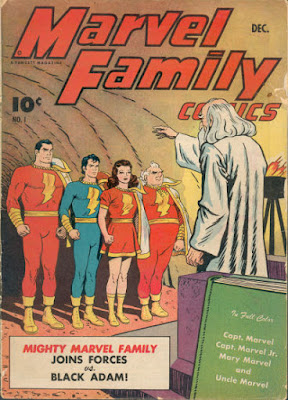 In his one and only appearance in Fawcett Comics, in Marvel Family #1 (December, 1945) by Otto Binder, C.C. Beck and Pete Costanza, readers are introduced to Black Adam!

Shazam relates the story of Black Adam to the Marvel Family (Captain Marvel, Mary Marvel, Captain Marvel Jr. and Uncle Marvel), telling of Shazam's younger days, when he tried to pass his powers on to Teth-Adam, who after saying the wizard's name, became the Mighty Adam....except that the adult Teth then used the wizard's powers against the people of Egypt.....so Shazam banished him to the farthest star....and he had just returned to face the wizard and the family in this issue! 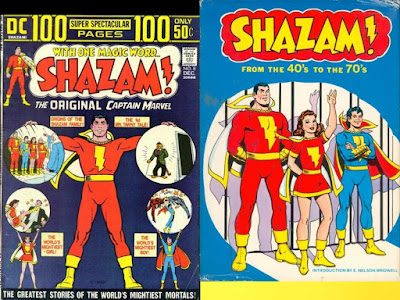 The three powered members of the Marvel Family could just match Black Adam's power....but it was the old con man, Uncle Marvel, who tricked Black Adam into saying the wizard's name, changing him back to Teth-Adam, who, then aged to dust...and death!

This story had been reprinted a few times by DC Comics (in Shazam! #8 and in Shazam! From the Forties to the Seventies), as well as being included in a villain pin-up in Limited Collectors' Edition #C-39, so, one could tell E. Nelson Bridwell had plans for Black Adam! 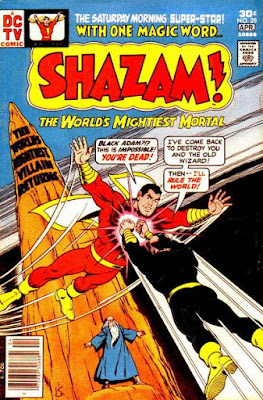 But, death can't keep a good villain down as learned in Shazam! #28 (March-April, 1977) by E. Nelson Bridwell and Kurt Schaffenberger.

Dr. Sivana is the reason for Black Adam's return, having invented a resurrection machine, the world's wickedest scientist revived Teth-Adam, who said the wizard's name and became Black Adam again!

Black Adam went out to menace Billy Batson and his Uncle Dudley (who had been traveling the country in an RV), with Black Adam and Captain Marvel being equally matched again, but, Uncle Dudley used the same trickery to get Black Adam to say the wizard's name again, allowing Captain Marvel to defeat the villain (though with less fatal results this time). 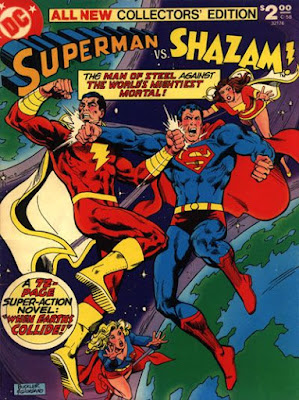 Black Adam ended up being one of the villains who brought about the big battle between Superman and Captain Marvel in the All-New Collectors' Edition #C-58 (May, 1978) by Gerry Conway, Rich Buckler and Dick Giordano which DC had been hinting at.

Immortal wizard Karmang wanted to revive the ghosts of his Mars, and figured the only way to do that was by smashing Earth-1 and Earth-S together to release enough energy to do that.  Using Black Adam and the sand creature from Quarrm to manipulate Superman and Captain Marvel into battle, Karmang almost succeeded, if not for the help of Supergirl and Mary Marvel.  One of the most notable events of this issue was Cap's use of the magic lightning as a weapon against Superman, but the story really only used Black Adam as one of two power beings to manipulate the heroes, sadly a trend that would continue in his early appearances. 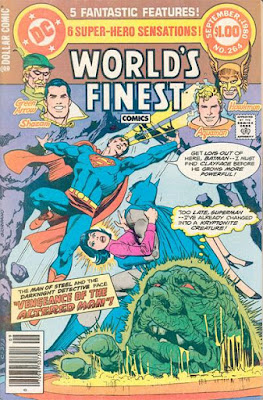 Teth-Adam had a brief cameo in World's Finest Comics #257 (June-July, 1979), as Captain Marvel was verifying that Black Adam was not active (Teth was still in a specially built cell).  But, that was a preparation for his next appearance, when Black Adam joined Mr. Mind's Monster Society of Evil in World's Finest Comics #264 (August-September, 1980) in a story by E. Nelson Bridwell, Don Newton and Dave Hunt, but Black Adam had to share the space with the rest of Cap's foes, and even though this was his individual battle, he also shared it with Oggar, the world's mightiest immortal, so there wasn't much Black Adam in this issue, nor in the finish to the Monster Society of Evil saga, in World's Finest Comics #267 (February-March, 1981), where the villains attacked the Rock of Eternity, but Black Adam was one of the first dispatched there! 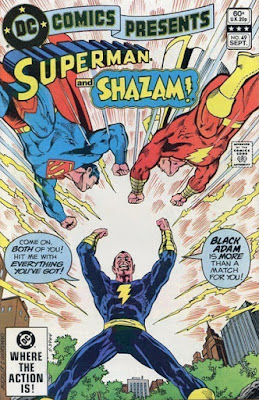 This time around, Black Adam had found himself on Earth-1 after his defeat at the Rock of Eternity (with Superman unknowingly freeing him from the Egyptian tomb he had been trapped under), and he planned on taking over that world...

....if not for some help from Captain Marvel and the powerless Billy Batson of Earth-1, who used a variation of the trick Uncle Marvel/Dudley used to defeat Black Adam yet again.  But, whether that Billy ever got to become a Captain Marvel on his own was a point that would soon be rendered moot.... 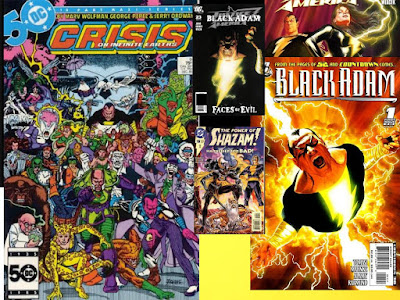 All of these appearances helped establish Black Adam as a major Captain Marvel villain, and this Black Adam appeared in Crisis On Infinite Earths (issues #9 and #10) in the 1980s, before DC's multiverse changed, and, after one brief new beginning, Black Adam returned again, to face Captain Marvel, then later the heroes of the Freedom Fighters and the Justice Society of America as well as Captain Marvel and his family....even getting a six issue mini-series of his own!   Well.....Shazam! to you, Black Adam, and thank for being part of over 75 years of Shazam! history.