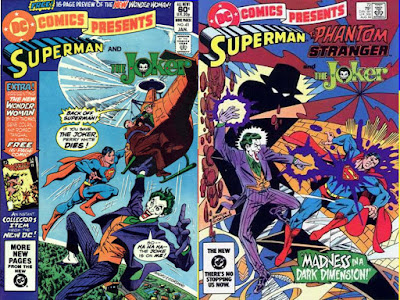 Let's take a look back at the magical, pre-Crisis days, to when the Man of Steel fought the Clown Prince of Crime without the Darknight Detective! 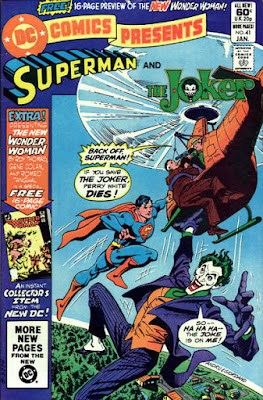 One of the best battles (and team-ups?) of Superman and the Joker happened in DC Comics Presents #41 (January, 1982) by Marty Pasko, Jose Luis Garcia-Lopez and Frank McLaughlin (with a cover by Ross Andru and Dick Giordano) with "The Terrible Tinseltown Treasure-Trap Treachery".

Joker breaks Superman's foe, the Prankster out of prison, with the idea the two of them will team-up to take the movie prop collection of deceased comedian Jerry Travis....while Superman calls Alfred to deal with this, as Batman is injured (and while Robin can't keep Batman from his Gotham patrols, Alfred did hide Joker's antics from him).  Problem is, Prankster also double crosses Joker and kidnaps Perry White in California, so Superman has to work with the Joker to save Perry! 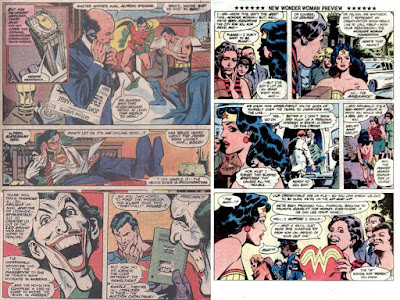 Superman does, and realizes how insane the Joker really is (and of course, Batman learns of Alfred's deception as well, but never meets with Superman or the Joker in this issue). 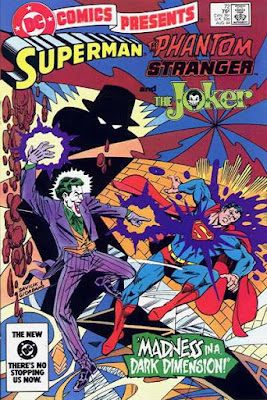 Where do you go from up?  You add a few characters (like Phantom Stranger) and give us DC Comics Presents #72 (August, 1984) by Paul Kupperberg, Alex Saviuk and Dennis Jensen (with a cover by Saviuk and Giordano), dealing with "Madness In A Dark Dimension".

Superman comes home to Metropolis to face a storm...which has an extradimensional origin, and is targeting him!  The Phantom Stranger explains that it is an old foe of his (Maaldor the Darklord) who had faced Superman twice before (once with Power Girl, once with Madame Xanadu), and that Superman will need help to stop this evil being who can now command the power of an alternate dimension.  That power was driving Maaldor mad, so who crazier than the Joker to help? 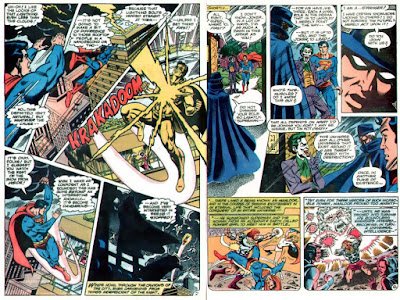 Superman and Joker head into Maaldor's dimension thanks to Phantom Stranger's help, and as the stresses of this dimension work on Superman's sanity, Joker begins to steal Maaldor's infinite power to save the Man of Steel by weakening Maaldor.  Joker does, though he eventually tries using the power against Superman, at least until the duo return to their home dimension, where Joker finds he couldn't keep the power.

This tale is unique in it is the first time Superman faces Joker without Batman (or another full-time JLAer). 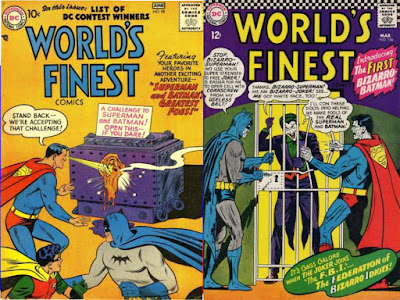 In case you are wondering, Superman and Joker first met way back in World's Finest Comics #88 (May-June, 1957), fighting with Batman and Luthor (who had a few more battles together).

Joker even teamed up with Bizarro as well for one issue! 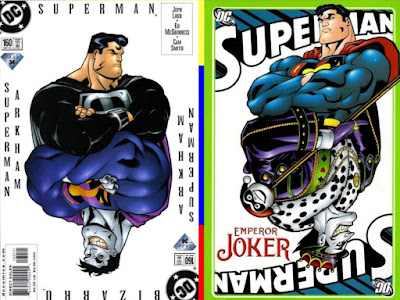