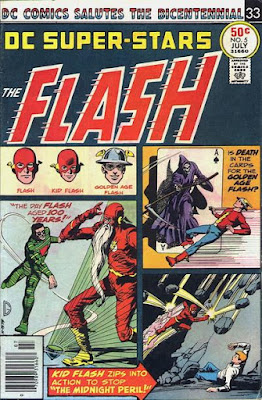 Flash was one of the DC characters that did hold onto his own title even through the 1970s, so it probably wasn't a bad idea to try to tap into his rich history and give him an issue of DC Super Stars, so DC did with DC Super Stars #5 (July, 1975), which had this great cover by Dick Giordano (and the 33 of a special month where DC was saluting the Bicentennial), even though history might make you feel old, or even like you are approacing death....reflecting the 3 tales reprinted in....or, sort of.


Don't speed through the summaries, as how one of these reprints wasn't really a reprint.... 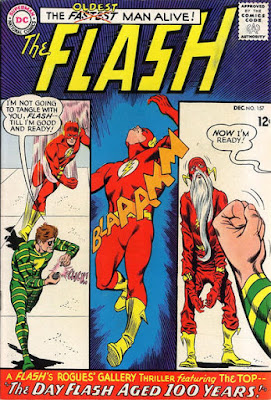 This story deal with Barry Allen dealing with the Top, one of his Rogue's Gallery solo (in between the first two appearances of the Rogue's Gallery's appearances), with the villain sending the Flash spinning by trying to steal an experimental anti-aging serum.  When the Top tries the formula on the Flash, the Flash appears to age at super speed!  This was a set up by the Flash, so the Top would leave him alone, and the Flash could follow the Top to his headquarters, but Flash couldn't find the formula there.  So, Flash tries again, this time pretending to be a hyper-evolved man with fantastic powers, gotten from a combination of the formula and one of the Top's super speed spinning gimmicks.  Top escapes the Flash, to get the vial, and gain those "powers".....but, the Flash followed him at super speed, and was able to recover the formula. 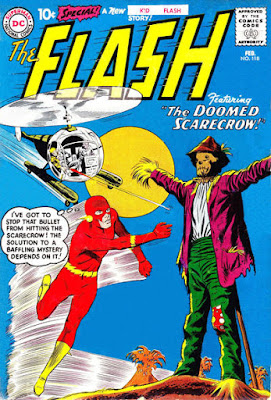 Next up is a tale of young Wally West as Kid Flash, with the back up tale from Flash #118 (February, 1961) by John Broome, Carmine Infantino and Joe Giella, where Kid Flash faces "The Midnight Peril".

Wally was taking a fraternity initiation test with his pal Pete Willard, staying in a haunted house until midnight.  Pete and Wally talk about Kid Flash, with Pete telling Wally he doesn't really believe in Kid Flash.  Then, the boys are approached by "ghosts" (two men in white sheets) who chase the boys away.  Wally changes into Kid Flash (who had a smaller version of Barry's costume at this time), who uses his super speed to chase the two men (who were using the house for crime) to the police station.  Then, heading back, Kid Flash saves Pete from a rockslide, earning his respect.  Wally beats Pete back to the house and switches back to Wally, in time enough for the pair to finish their initiation into the fraternity. 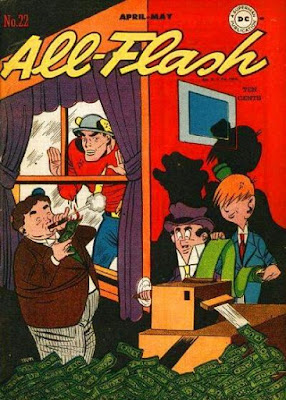 Now the story of "Deal Me From The Bottom" originally appeared in All-Flash #22 (April-May, 1946) by John Broome and Martin Naydel, with Jay Garrick, the Golden Age Flash facing off against Deuces Wilde, a gambler who used a young boy who had an ability to pitch playing cards, and that was a rough deal for the Flash.


It was also a rough deal for original artist Martin Naydel, as they had the story redrawn by Rico Rival, giving the feel of a newer story, from a Golden Age one! 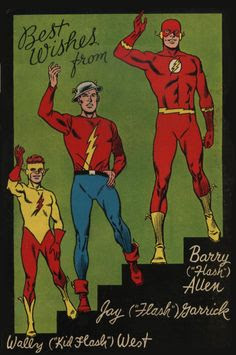 The issue also had a page from Strange Adventures that detailed the speed of light, as well as a text piece, that related a little history of DC's speedsters, including the Flashes -Jay, Barry and Wally - as well as the Reverse-Flash, and both Johnny Quicks (the one from Earth-2 and the other from Earth-3), but...

....you can follow the links to find info on them, and enjoy this art by Carmine Infantino of the 3 Flashes instead!
Posted by Dave's Not Here Comic Blog at 4:00 AM