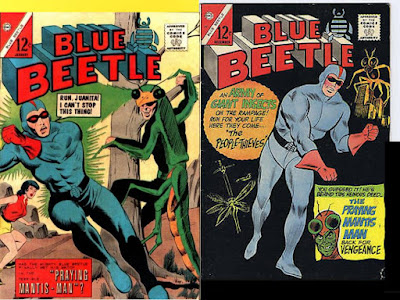 Super heroes can borrow a little from other genres, and Charlton's original Blue Beetle, archeologist Dan Garrett, did, as he faced his most dread menace, who appeared to come straight from a horror movie....the dreaded Praying Mantis-Man!!!!

Well, to be honest, it was just a villain Blue Beetle faced twice during his original two Charlton comics run, but, let's take a look at him anyway! 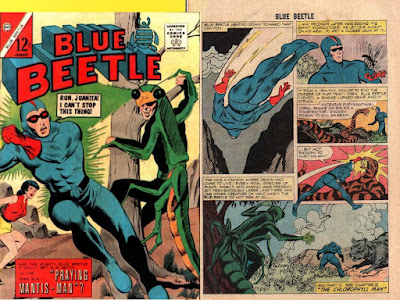 Premiering in Blue Beetle #4 (January, 1965) by Joe Gill, Bill Fraccio and Tony Tallarico (with cover by Pat Massulli and Dick Giordano), was Hunter Mann, a radical naturalist who, due to his work with chlorophyll, turned a shade of green, and planned to change the work with giant mosquitos.  His work was found out by entomologist Juanita Rivera, who enlisted the help of Dan Garrett.  Dan, when he realized the size of the threat, pulled out his mystic scarab, said "kaji dha" and became the super hero, Blue Beetle! 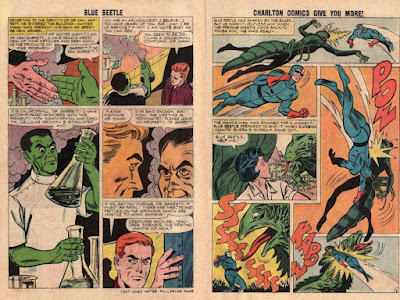 Blue Beetle fought the giant insects, as well has the creature Mann had mutated into, the Praying Mantis-Man, with his hypnotic eye power.  There were more than giant mosquitos, and Dan fought them as well, protecting Juanita, and eventually vanquishing his foe. 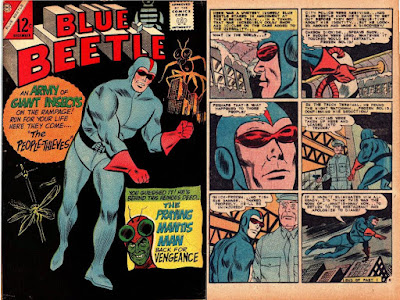 Not content with that loss, the Praying Mantis-Man returned to face Blue Beetle in Blue Beetle #53 (December, 1965) by Joe Gill and Tony Tallarico (with Tallarico providing the cover), with an even bigger threat to Blue Beetle and the world!  This time, Hunter Mann was freezing people in New York, and drawing the attention of Dan Garrett away from his friend, Diane, as Dan goes into action with his mystic scarab, while she goes home. 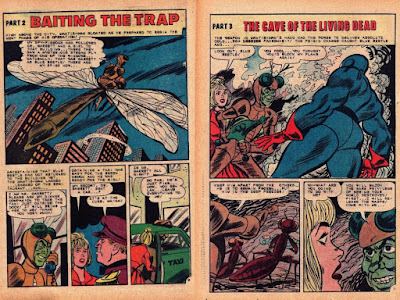 But, this working in Mann's favor, as he kidnaps Diane, taking her to his lair (which includes many insects, including his giant mutated army ants).  There, he explains his plans to destroy the world with his mutated insects, having only those he froze to repopulate the world.  Praying Mantis-Man faces Blue Beetle, and successfully freezes him.  As Mann continues his plans, Diane schemes, raising  the temperature of the room Blue Beetle is in, unfreezing him.  Blue Beetle goes out to defeat the creatures Mann released, leaving Mann to fall to his likely death as Dan was just too busy to save him.

Posted by Dave's Not Here Comic Blog at 1:32 PM