A Pair Of Two-Face Catwoman Issues 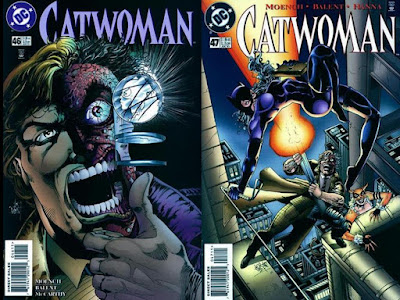 On this doubly special date, time to take a double look at two issues of Catwoman, featuring Selina Kyle, a Batman foe who became much friendly to Batman, and Harvey Dent, a former friend of Batman who became a deadly foe!
Let's just pull up to the sidewalk and take a look see, shall we?

Two-Face Part One: Two Cats In One 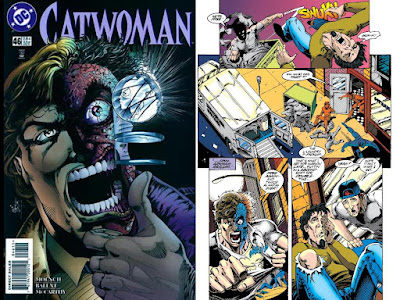 Two-Face escapes Arkham Asylum in Catwoman #46 (June, 1997) written by Doug Moench, penciled by Jim Balent and inked by Ray McCarthy, and has a new plan.  To steal a first edition of Stevenson's "The Strange Case Of Dr. Jekyll And Mr. Hyde". 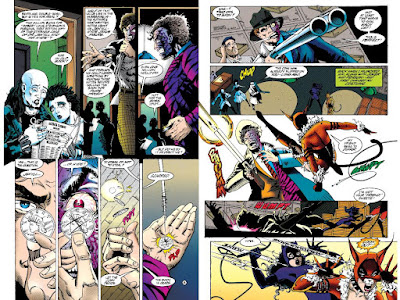 The only problem....the book has already been stolen by a cat burglar.  Not Catwoman, but Alley Cat, some competition for Selina, both of whom were dealing with known fence Zee, as Alley Cat wanted to unload the book.  Zee set up a buy at a warehouse, where, Two-Face double crossed the seller (thinking the thief was Catwoman, but now knowing it was a second feline lady...), setting the warehouse on fire, trapping Catwoman alone with the book surrounded by flames! 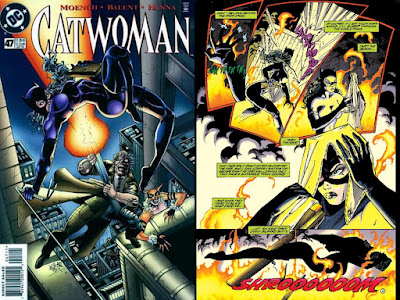 Picking up where the last issue left off, Catwoman #47 (July, 1997) by Moench/Balent, but inked by Scott Hanna, Selina escaped the flames with the priceless tome, preventing it and herself from being engulfed by flames. as the rest of the cast had already fled the warehouse. 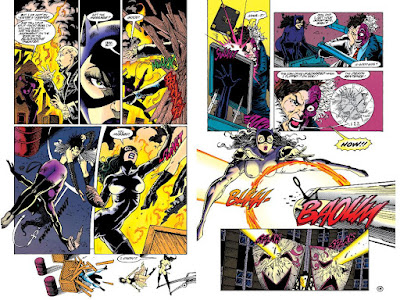 Selina met with Two-Face's duo, to set up another meet to sell the book.  After having a confrontation with Alley Cat at Zee's house, Selina went to await Harvey coming for the book.  Two-Face planned another double cross, but Catwoman was ready for it and captured Harvey for the Gotham City Police.  Selina even stopped Alley Cat from trying to take the book as well, turning it over to Moreland McShane (a Gotham cop charged to hunting Catwoman, whom she worked for as Selina).  Selina was left, pondering her own duality.
Posted by Dave's Not Here Comic Blog at 11:22 AM