OMAC Two By Two The First 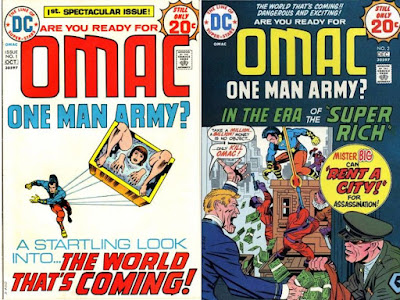 Jack Kirby was a visionary, looking ahead to the future.  With his output at DC decreasing, Kirby had to come up with a new idea, and that was to look ahead to the world that's coming....

...with OMAC, the One Man Army Corps! 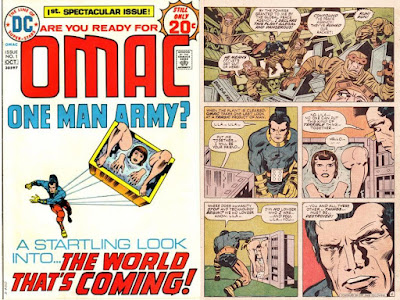 Thus the saga began in OMAC #1 (September-October, 1974) written and penciled by Jack Kirby, with inks and letters by Mike Royer,  with the title character destroying the factory of Pseudo-People, Inc. at the behest of the Global Peace Agency. 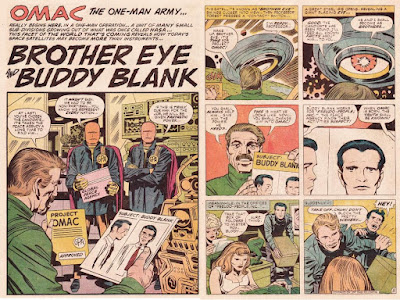 The Global Peace Agency (the nameless, faceless people who seemed to run the world), approached Professor Myron Forest, creator of the orbiting satellite called Brother Eye, to create for them an agent who could fight the menaces of the future world.  They found a perfect candidate in average Buddy Blank, an employee of the questionable Pseudo-People, Inc.,  who could be turned into the man they needed.

Poor Buddy was a minor employee, not liked by his co-workers, except for the pretty Lila, who was his only friend. 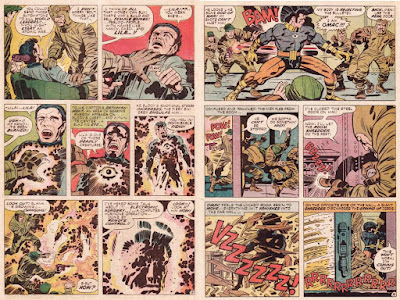 Buddy followed her once, and discovered her secret, she was a prototype of a new weapon his company created, robotic life-like friends (that were bombs that would explode when assembled).  This horrified Buddy, but the company was planning to eliminate him, had not Brother Eye took this moment to begin his transformation into OMAC.  OMAC, then battled the traps in Section D with his newfound powers.  But, in discussion with Brother Eye, realized OMAC should meet his creator, then they had to take out the man behind the company...Mister Big! 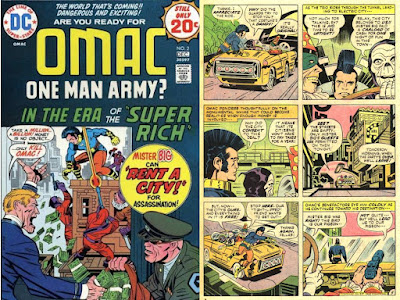 OMAC started his quest to meet Professor Forest in Electric City in OMAC #2 (November-December, 1974) written and drawn by Jack Kirby, inked by D. Bruce Berry and letters by Mike Royer, but found Electric City to be closed as it was rented out by one man (Mister Big, who figured not even a vineyard could contain the incredibly lawless party he wanted to throw for himself). 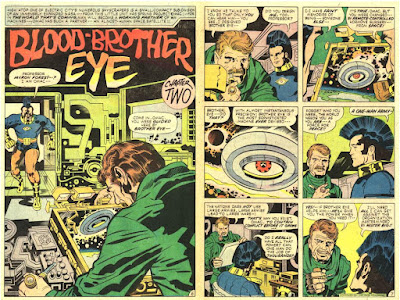 A couple of party goers helped take OMAC further into the city (though they were hired killers for Mr. Big), where OMAC found Professor Forest.  Forest helped OMAC understand that he was created to fight in a world where armies going to battle was too dangerous, so he was changed into OMAC (with little memory of his previous life), to be a powerhouse for peace.

That's when the hit men attacked, only stunning OMAC, but killing the Professor.  OMAC realized he had to stop Mr. Big.  The party was a cover to end Project OMAC, though it only allowed OMAC, enhanced with power by Brother Eye, to track down Mr. Big, Major Domo and the rest of his criminal organization, no matter the damage to the city and its populace. 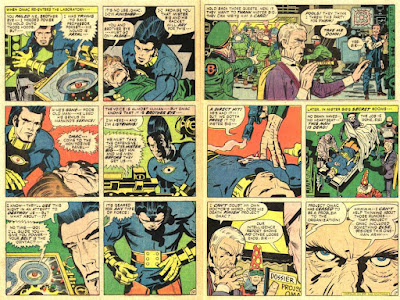 OMAC did have a final battle with them...where he was killed?  That's when the Global Peace Agency popped in to arrest Mr. Big and Major Domo, who resisted, but were taken out by Brother Eye.  The GPA then revealed they only let them think OMAC was dead (as part of the reason they could arrest them), and revived OMAC, who would continue as the enforcer for the Global Peace Agency. 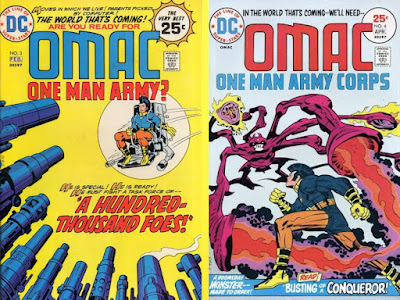 An oddly prophetic look at future times, with an agency beyond governments arranging the world to its whim, and criminals controlling cities to do their bidding at a causal thought, but these and more were part of the world of the future in Kirby's OMAC!