A Key To Superman's History 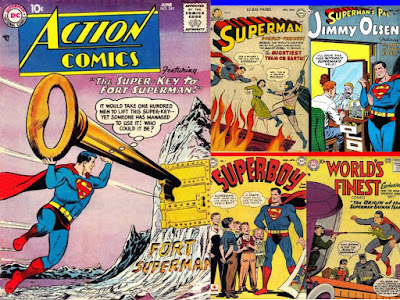 Unlocking a little mystery of Superman, starting with a few facts related to his home, the Fortress of Solitude, as well as solving the mystery and defining the differences between the Golden Age/Earth-2 Superman and Silver Age/Earth-1 Superman, by telling where the first adventure of the Silver Age Superman is.....

The Super-Key To Fort Superman 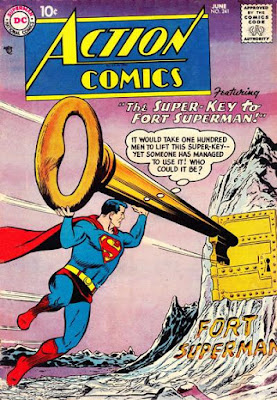 In a story by Jerry Coleman, Wayne Boring and Stan Kaye, Action Comics #241 (June, 1958) introduces readers to Superman's Fortress of Solitude, a desolate area in the arctic, which is place where he can go to relax, as well as conduct experiments (including samples of Kryptonite), keep keepsakes for his friends, follow up on his hobbies and keep trophies and souvenirs, which includes an interplanetary zoo.


This is a well protected place, but, Superman's friend, Batman, found a way to sneak in, to play a prank on Superman, and remind him of the anniversary of the day Superman first arrived on Earth from Krypton. 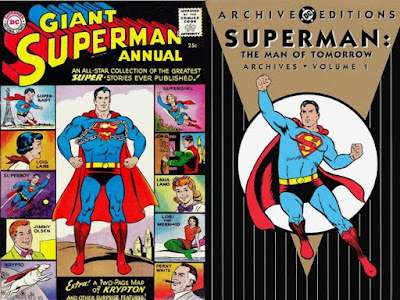 This key issue has been reprinted many times, most notably in the Superman Annual #1 of 1960, as well as in the Superman: The Man of Tomorrow Archives #1 of 2004, more or less making this the first appearance of the Silver Age Superman (the arctic Fortress is one of the defining characteristics of the Earth-1 Superman, as is soon to follow additions to the Superman family, like Brainiac and the city of Kandor which Superman would store in the Fortress as well, and Supergirl and her home of Argo City).

But, this story focuses on Superman having a rich past, so, it obviously isn't the start of the Silver Age Superman, so, let's continue the look back to find a few more distinguishing characteristics....and the true first appearance. 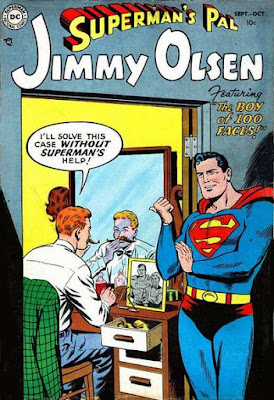 It was the Silver Age that saw Jimmy Olsen to be more involved in Superman's life, and that started with Jimmy getting his own title with Superman's Pal Jimmy Olsen #1 (September-October, 1954).

Jimmy got first used his signal watch, which he could use to call Superman in this issue, as well as the introduction of the Flying Newsroom, which allowed Jimmy to quickly get into the action (or trouble), so he could capture photos of breaking news...and later issues introduced things like Jimmy's own super-hero identity of Elastic Lad, as well as Morgan Edge and the beginnings of the battle for control of the Fourth World with Orion and Darkseid. 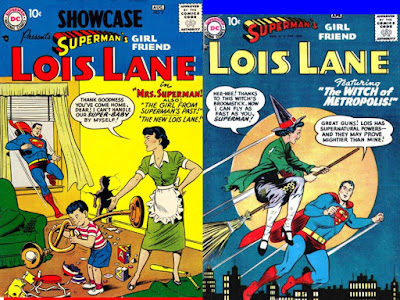 Jimmy was just the photographer, it was Clark Kent and Lois Lane who usually put words to the pictures, and Lois got the start of her solo adventures as well, a few years later, starting with Showcase #9 (July-August, 1957), which, after a second featured appearance in Showcase, led to her own title as well. 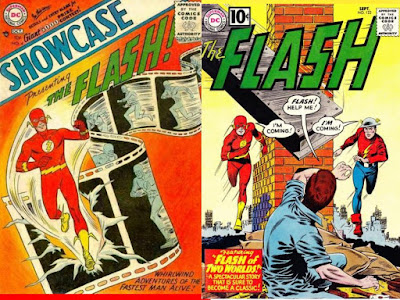 Just a few issues prior to Lois' focused debut, was Showcase #4 (September-October, 1956), with the premiere of the Silver Age Flash Barry Allen, and a few years after that, the concept of Earth-1 and Earth-2 was introduced in Flash #123 (September, 1961) with the return of the Golden Age Flash Jay Garrick (and, soon after that, the return of the Golden Age Justice Society, the counterparts of the Silver Age Justice League of America). 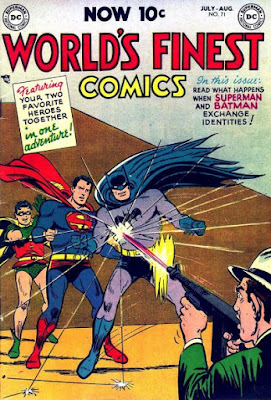 One of the Silver Age Superman's friends in the Justice League of America was Batman, and their regular team-ups began with World's Finest Comics #71 (July-August, 1954), as their two features in this magazine merged into one.   Before that, the only time the two teamed up in this comic were for the symbolic covers that they had, suggesting Superman and Batman (as well as Robin) were friends, but only teasing readers.

These team-ups predated their founding of the Justice League of America (along with Flash Barry Allen and four others: Wonder Woman, Aquaman, Martian Manhunter and Green Lantern, and their first published battle against Starro the Conqueror), but their friendship had begun even before that. 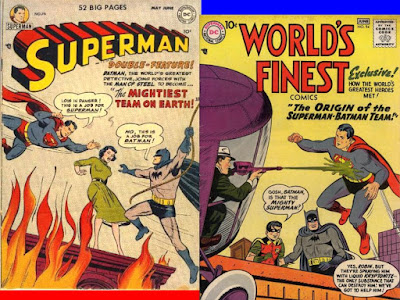 It was in Superman #76 (May-June, 1952) that Superman and Batman learned each other's identities (a crucial point in the story of the Fortress, as Batman used that knowledge to torment Superman), and this issue was also counts as the first appearance of the Silver Age Batman (as well as Robin), though it was not the first meeting of the Silver Age Superman and Batman....that happened in a flashback tale told in World's Finest Comics #94 (May-June, 1958) 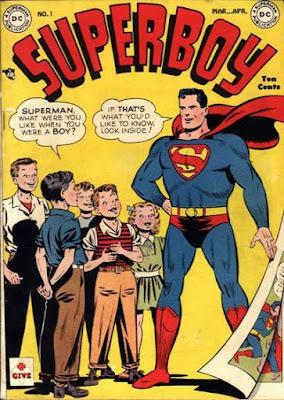 Superman recalled events of his earlier life in Superboy #1 (March-April, 1949), which was a title devoted to the adventures of Superman when he was a boy living in Smallville with Ma and Pa Kent, facing a younger Lex Luthor, and keeping his secret from Lana Lang.

Superboy was another unique factor in the life of the Silver Age Superman; the Golden Age Superman did not have adventures in costume as a boy, only slowly learning of his powers over time (including an adventure where Superboy crossed over from Earth-1 to Earth-2, to help teach a confused young Clark Kent on that world a little bit about dealing with his Kryptonian powers). 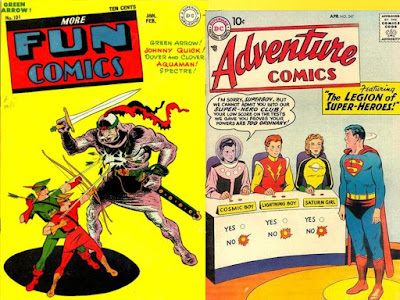 But, Superboy #1 was not the first appearance of Superboy, that happened in More Fun Comics #101 (January-February, 1945), where we first saw the adventures of the younger Superman (by extension, this also makes More Fun Comics #101 the first Earth-1 story, as all the other comics of the time dealt with Golden Age characters and members of the Justice Society of America and Seven Soldiers of Victory, as well as many unaffiliated heroes....which were retroactively put into the All-Star Squadron).  Superboy's adventures continued from More Fun Comics to Adventure Comics, where he met a literal Legion of Super-Heroes in Adventure Comics #247 (April, 1958), a team of heroes from the future who recruited the lad to join him (and a team which, in the real world, predated the Justice League of America). 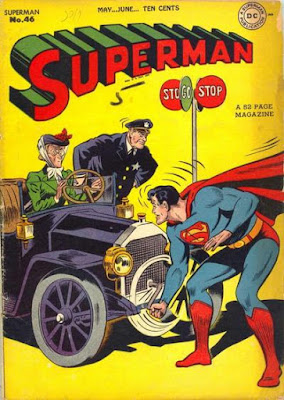 Now, More Fun Comics #101 could be considered the first appearance of the Silver Age Superman (as Superboy would later grow up to be Superman), but the earliest chronological appearance of the Earth-1 Superman as Superman was in Superman #46 (May-June, 1947), in a story called "That Old Class Of Superboy's" by Jerry Siegel, John Sikela and George Roussos, wherein Clark Kent checks up on some of his old Smallville classmates (and mentions being Superboy for the first time in a Superman story).  Worth noting as well, Lois Lane is also in this story, which makes this the first appearance of a Silver Age Lois Lane as well....solving the mystery of the beginning of the Silver Age Superman.
Posted by Dave's Not Here Comic Blog at 3:16 AM