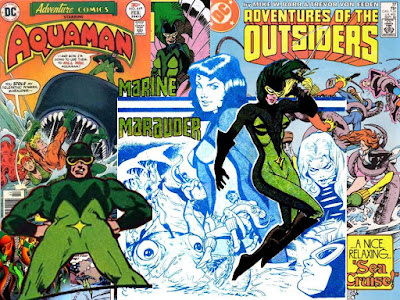 Something a little different today....a villain who ended her career facing the Flash, and he started it facing Aquaman.

It's nothing odd, it's just that there were two villains who used the identity of the Marine Marauder, one who faced Aquaman, and the second, who faced first the Outsiders, then Flash and Aquaman! 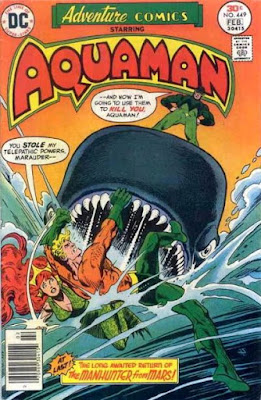 
The Marine Marauder was a marine biologist who was a little crazy, using his technological ability to control air breathing marine life to menace Aquaman, stealing a shipment of vaccine bound for Europe in a blackmail attempt, with Aquaman and Mera being called in to stop him (failing, but tracking him down and retrieving the vaccine (but being too busy trying to find Aquababy, whom Aquaman's octopus friend, Topo, took off with, to capture the villain). 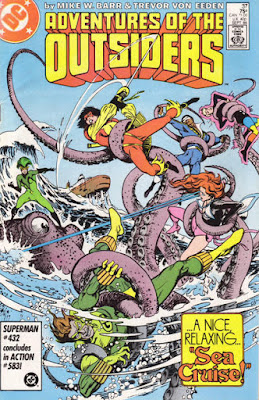 The original Marine Marauder didn't return, but, in Adventures Of The Outsiders #37 (September, 1986 by Mike W. Barr and Trevor Von Eeden, under a cover by Jose Luis Garcia-Lopez), a new, female Marine Marauder first appeared.

Dr. Marlene Simmonds was a competitive marine biologist, who used the money she made in business and a talent for oceanography, taking that money (and some of her unnamed brother....who might have been the original Marine Marauder?), starting her career as a super-villain, with an attack on a cruise ship (which just happened to be one the Outsiders were taking a vacation as they were moving from Gotham to California) in ""Won't You Let Me Take You On A -- Sea Cruise?".  Marine Marauder captured new Outsider, the telepathic and telekinetic Looker in this issue..... 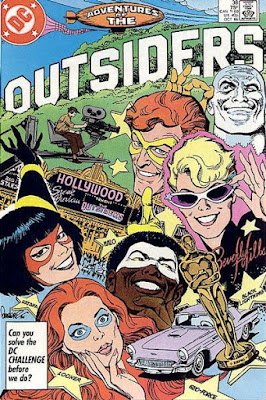 ...and, with Adventures Of The Outsiders #38 (October, 1986, also by Barr and Von Eeden, with a cover by Garcia-Lopez), Marine Marauder thought to find a way to take Looker's powers, but was stopped by the rest of the team of the Outsiders, being taken away in the clutches of an octopus (which she didn't seem to be able to control), all in the first story of two in this issue (with this being "Many Brave Hearts Are Asleep In The Deep").

The second story dealt with the Outsiders arriving in Los Angeles, setting up for their appearance in the baxter paper stock version of the Outsiders #1 (November, 1985, which also introduced Looker, though her back story evolved over the last issues of Batman and the Outsiders, starting in #27, and Adventures of the Outsiders), and preparing for the reprints of that direct only book to appear in the next issue of Adventures Of The Outsiders (where the team first faced the robotic Nuclear Family!). 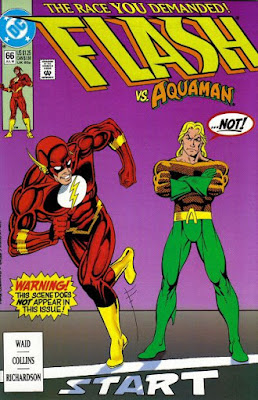 Marlene Simmonds next appeared in a story in Flash #66 (July, 1992)....in fact, it was a "Fish Story", by Mark Waid, Michael Collins and Roy Richardson...with a race between Flash and Aquaman?  (No, not really....it was Superman and Flash who would race, but not here!).

Wally West (who was Flash at the time), was trying to enjoy a sea cruise with his girlfriend, Linda Park, when the ship was hijacked by whales and taken to an island (where Wally saw Aquaman in the distance).  It wasn't Aquaman controlling the whales, but Marine Marauder, who is using the people on the ship to search for the Lost Crown of Enlil, a Babylonian god of the seas, who had been reported to die in this area, with Marlene looking for his crown, as it would enable her to control the seven seas.  Aquaman and Flash go underwater to retrieve it (to prevent harm to the passengers), finding it, but Aquaman puts it on, as Enlil was manipulating Aquaman at this time....and plans to kill the passengers by flooding the island with a giant wave.  Flash thinks quick, knocking the crown off of Aquaman, and saves everyone...except Marine Marauder, who disappears as the wave crashes as she goes after the crown.  Aquaman helps Flash re-board the passengers, so Wally and Linda can continue their cruise. 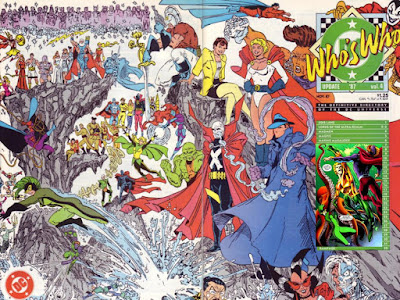 ... that was it for the Marine Marauder, but she should resurface somewhere!
Posted by Dave's Not Here Comic Blog at 3:39 AM