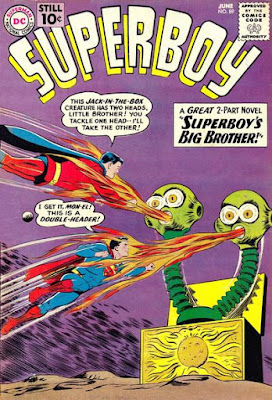 One of the roughest things for Superboy (Superman's younger self) to deal with was being the only survivor of Krypton.  So, imagine his happiness in Superboy #89 (June, 1961, by Robert Bernstein and George Papp) when he rescues a young man from an exploding ship, to find out that the older lad, suffering from amnesia, has the same powers as Superboy, and a medallion and a note from Jor-El (Superboy's father)!  This is enough to convince Superboy and the the lad that this boy must be Superboy's older brother, and they name him Mon-El (since Superboy found him on a Monday.....).  The Kents take him in, and disguise his identity as Bob Cobb, traveling brush salesman. 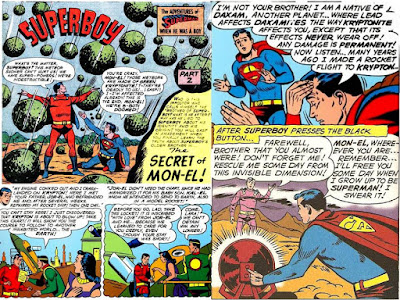 Problem was, Superboy found that the metal of Mon-El's belt buckle wasn't Kryptonian, and Mon-El didn't react when Superboy exposed him to Kryptonite whem Mon-El was sleeping.  Superboy came up with a plan to out Mon-El, by paining lead balls green, and reacting to them as if they were Green Kryptonite, figuring Mon-El would do the same....and he could expose the lad's secret.  All went according to Superboy's plan, except that Mon-El was really affected by the lead!  See, he was really a Daxamite, who had ended up on Krypton before it exploded, and got help from Jor-El, and a map to Earth.  Daxamite's have the same powers as Kryptonians, but a fatal weakness to lead.  So, to save the lad's life, Superboy put him into the Phantom Zone....promising to cure him at some point in the future....except Superboy didn't know how far in the future! 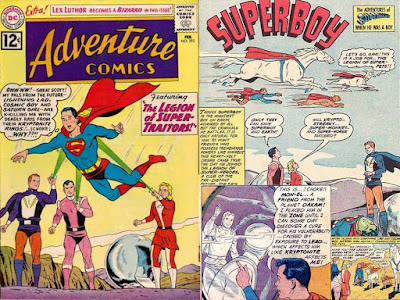 Mon-El next appeared as a regret of Superboy's in Adventure Comics #293 (February, 1962 by Jerry Siegel, Curt Swan and George Klein), wherein Superboy faces off against the Brain Globes of Rambat, who summon the original members of the Legion of Super-Heroes (Cosmic Boy, Saturn Girl and Lightning Lad) from the 30th Century to fight Superboy (and they were freeing Phantom Zone villains to fight Superboy, so it was lucky that Mon-El was there to warn them), and only with the intervention of Krypto the Superdog, Streaky the Supercat, Beppo the Supermonkey and Comet the Superhorse (who would form the Legion of Super-Pets) stopped the evil Brain Globes.  Superboy was still feeling this regret as he traveled 1000 years into to the future again to meet the Legion in Adventure Comics #300. Mon-El faded from Superboy's life, but was active in Superman's (as the Boy of Steel hadn't found a cure).  Mon-El helped Superman in Action Comics #284 (January, 1962 by Robert Bernstein, Curt Swan and George Klein), where a small hole (that only a child could fit through) came between our dimension and that of the Phantom Zone (Mon-El was nice enough to warn Superman, who changed himself into "The Babe of Steel" with Red Kryptonite to stop it). Mon-El was there when Lana Lang turned evil thanks to a broach Superman gave her in Superman's Girlfriend, Lois Lane #33 (May, 1962 with art by Curt Swan and George Klein), and Lana sent her rivals, Lois Lane and telepathic mermaid Lori Lemaris, into the Phantom Zone.

But it all worked out in the end, with Lois and Lori being returned, and Mon-El still waiting...

.....and Lois not becoming "The Phantom Lois Lane" for as long as Mon-El. 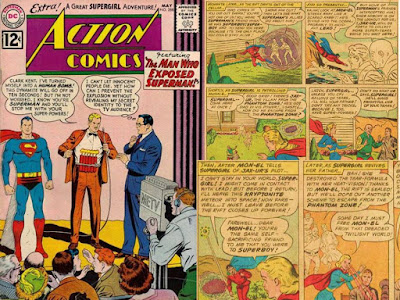 Mon-El helped Supergirl against "The Man Who Made Supergirl Cry" in Action Comics #288 (May, 1962 by Leo Dorfman and Jim Mooney), which was her adoptive Earth father, Fred Danvers, being manipulated by Jax-Ur and the Phantom Zone villains...


...as each of her tears was able to release a Phantom Zone Villain! 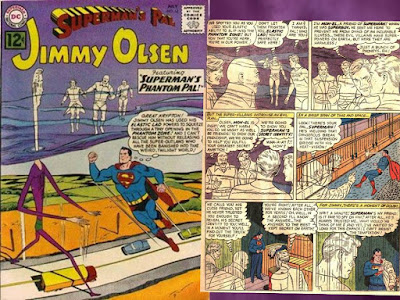 Jimmy Olsen encountered Mon-El when he found a small hole in to the Zone, which Jimmy was able to go into as Elastic Lad (thanks to a potion he received earlier to be a sometime super-hero) in Superman's Pal, Jimmy Olsen #62 (July, 1962 by Leo Dorfman, Curt Swan and George Klein), and Jax-Ur and the villains tried to use Jimmy's curiosity against him, to get Jimmy to find out Superman's secret identity... 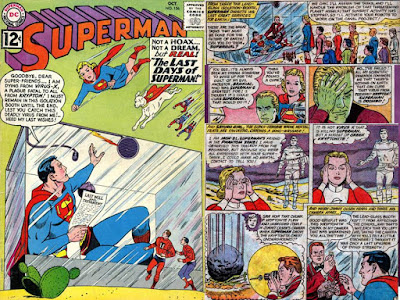 Mon-El, along with Supergirl, Krypto, Batman, Robin and a contingent of the Legion of Super-Heroes, were there for "The Last Days of Superman" in Superman #156 (October, 1962 by Edmond Hamilton, Curt Swan and George Klein), when Superman was dying from exposure to the deadly Kryptonian plague, Virus X.

Mon-El had the missing piece of the puzzle, thanks to being an observer in the Phantom Zone, which saved Superman's life. 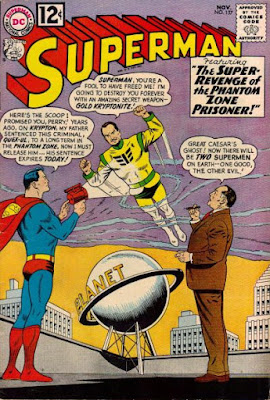 Mon-El was there when Superman released Kryptonian criminal, Quex-Ul, after his sentence had passed in Superman #157 (November, 1962 by Edmond Hamilton, Curt Swan and George Klein) in "The Super-Revenge Of The Phantom Zone Villain", which eventually led to a battle between Superman and Quex-Ul, with the villain planning to remove Superman's powers with Gold Kryptonite...


...but, instead, Quex-Ul lost his own powers after realizing Superman was trying to prove his innocence of the crimes (and Quex-Ul also got amnesia as well, with Superman getting him a job at the Daily Planet to help him).

Quex-Ul got free while Mon-El was still trapped! 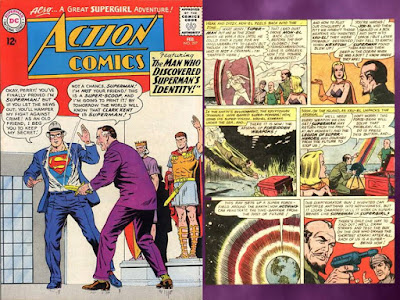 Mon-El was there when the Phantom Zone villains were being released by Lesla-Lar (a foe of Supergirl's) in Action Comics #297 (February, 1963 by Leo Dorfman and Jim Mooney) as she unleashed "The Forbidden Weapons Of Krypton", but wasn't able to help much due to his lead poisoning.


Yet again, Mon-El wasn't all that helpful, and this was wearing on the Daxamite lad with the real name of Lar Gand. 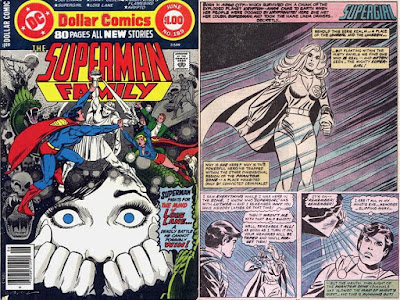 Mon-El didn't pop up again in current times until Superman Family #189 (May-June, 1978 by Jack C. Harris, Jack Abel and Frank Giacoia) in "Memories Of Menace",  as Mon-El helps a desperate Supergirl against General Zod, Jax-Ur and Kru-El as she attempts to find evidence to get her freed from being falsely imprisoned in the Phantom Zone (thanks to the machinations of Lesla-Lar.....and, at the same time, Snapper Carr, an honorary member of the JLA, goes to work for Supergirl's dad, Fred Danvers). 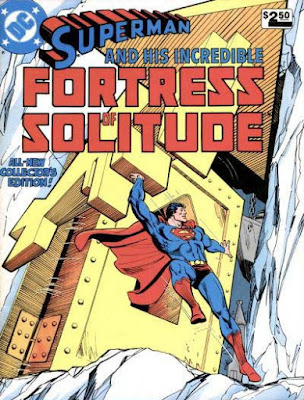 Mon-El had been on the mind of the Superman Family a lot less as time passed, though Superman did think about Mon-El as time was ticking down for Earth in the DC Special Series #26 (Summer, 1981)...

...as Superman tried to save the planet from his incredible Fortress of Solitude and the menace of Dominus in the "Fortress of Fear" by Roy Thomas, Ross Andru and Romeo Tanghal.

Superman did save Earth, all without Mon-El's help. 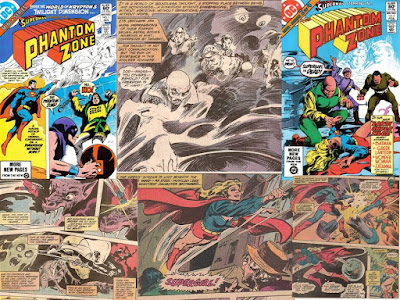 Mon-El's last current appearances were in the the first two issues of the four issue Phantom Zone mini-series of 1982 (by Steve Gerber, Gene Colan and Tony DeZuniga), wherein Superman's Kryptonian foes all escaped the Phantom Zone, trapping Superman there....with Mon-El taking Superman to an area far within the Zone, where it was rumored that an escape from the Zone was available (but, Mon-El couldn't take it, as if he escaped, he'd still be dying of the lead poisoning Superboy had inflicted upon him...). 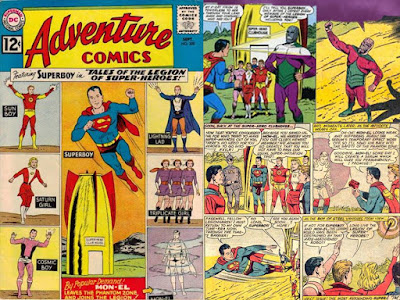 Mon-El seemed to be trapped in the zone for 1000 years, as he was still there in the 30th Century time of the Legion of Super-Heroes, and was freed for a brief time in Adventure Comics #300 (September, 1962 by Jerry Siegel, John Forte and Al Plastino) as Superboy and the Legion needed help against Urthlo, "The Face Behind The Lead Mask".  Mon-El was made an honorary Legion member at this point, as he was given a serum that would allow him to leave the Phantom Zone for a while. 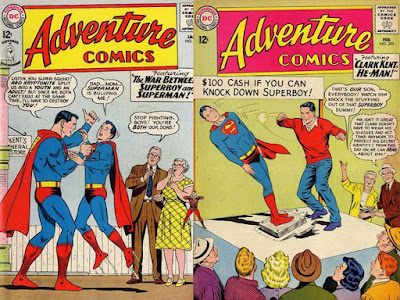 With Adventure Comics #304 (January, 1963) and the death of Lightning Lad, work on a cure for Mon-El intensified, and in Adventure Comics #305 (February, 1963), Mon-El was able to leave the Phantom Zone for good, and joined the Legion of Super-Heroes (and his future, and changing past, is something that we'll have to look into....in the future!).

Posted by Dave's Not Here Comic Blog at 4:10 AM