Halloween Hijinks With Deadman And The Spectre 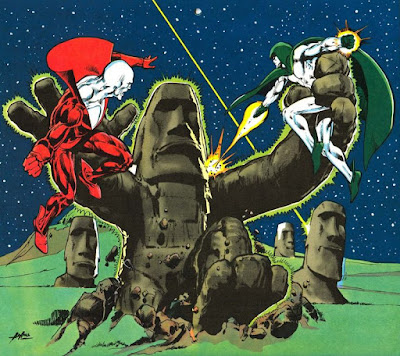 Deadman and Spectre face off against the statues of Easter Island in this piece by Neal Adams...

...where these two undead heroes are forced to fight together to save us all in this work from the 1977 Super DC Calendar. 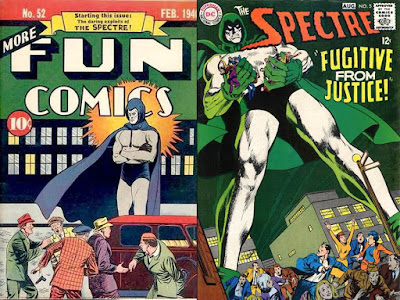 The Spectre was cop Jim Corrigan, killed by the mob, and given the ability to return to mete out vengeance against those who do wrong first appeared in More Fun Comics #52 (February, 1940, by Jerry Siegel and Bernard Baily), joined the Justice Society of America, and continued to fight for justice for decades... 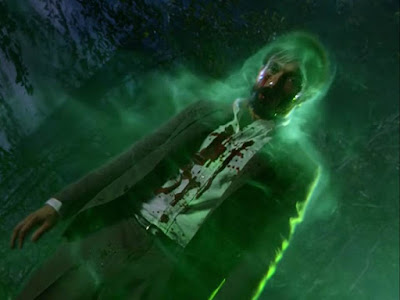 ....and even recently appeared as Jim Corrigan in a couple of episodes of the NBC TV show, Constantine, played by Emmett J. Scanlan (and we saw hints of detective Corrigan becoming Spectre thanks to visions of John's friend, Zed, who was a psychic). 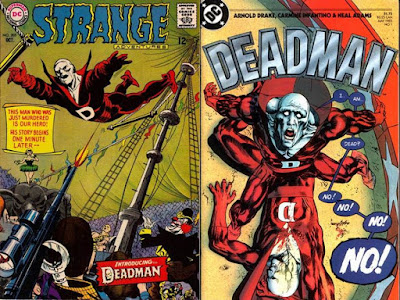 Circus aerialist Boston Brand was shot dead during a performance, but that was only the beginning of the story, with the spirit Rama Kushna reanimating Boston as Deadman, a spirit who could possess others, and searching for the man with the Hook for an arm who shot him, all starting in Strange Adventures #205 (October, 1967, by Arnold Drake and Carmine Infantino). 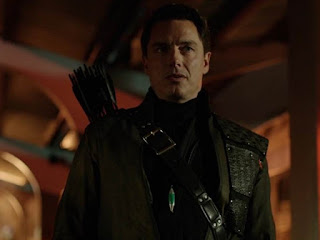 Deadman hasn't made it to television yet, but Nanda Parbat (a mystical realm in the mountains) has, as the home of Ra's Al Ghul, and the League of Assassins, including Merlyn (a foe of Green Arrow, who first appeared in Justice League of America #94 in November, 1971 by Mike Friedrich, Neal Adams and Dick Dillin, with Deadman as a guest star; played by John Barrowman), all in the CW Arrow series. 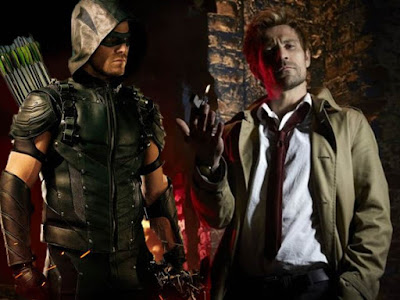 One can only hope that Constantine appearing on Arrow might lead to a later appearance by Deadman and Spectre!
Posted by Dave's Not Here Comic Blog at 3:44 AM