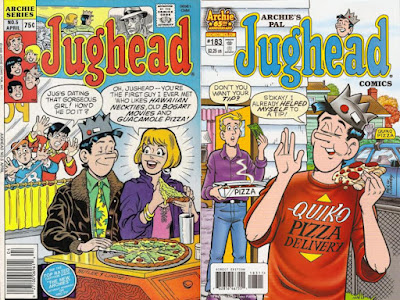 To be fair, National Pizza Week started on January 9th, but with a whole week, figured it would be best to save a pair of covers with Jughead enjoying a pizza until the weekend.

One thing Jughead loves is pizza, as shown as he's dating Debbie on the cover for Jughead #5 (April, 1988) by Nate Butler and Rex Lindsey, or enjoying a snack while working like on the cover to Archie's Pal Jughead #183 (September, 2007) by Rex Lindsey.