Balloon Buster And Enemy Ace In World War I 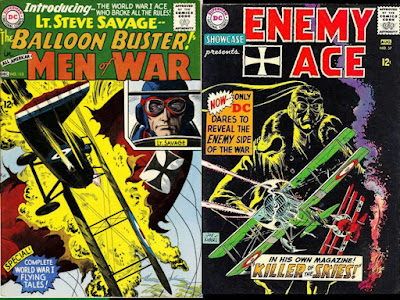 It's the eternal war of good versus evil...and those who fought those wars were as different as the wars they fought.

But, there were two men on opposite sides of the first World War who had their careers covered in comic books....so, let's take a look at the lives of the Balloon Buster and the Enemy Ace! 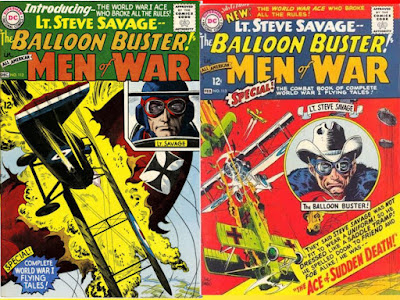 Lt. Steve Savage got his start in All-American Men Of War #112 (November-December, 1965) by Robert Kanigher and Russ Heath, but the character was born and raised in Mustang River, Wyoming, raised by a poor farmer, who taught junior how to shoot a gun (any gun).  Savage promised his father on his death bed to make his name remembered, enlisting in the Army Air Corps to be a pilot.  Savage was insubordinate, a risk taker, gaining the nickname Balloon Buster as he used German attack ballons as his favorite targets. 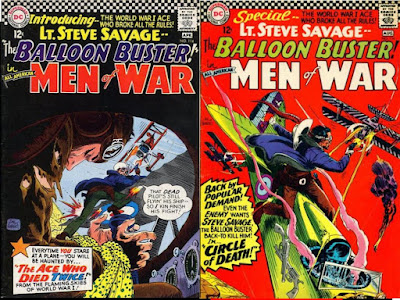 Savage was not the world's best pilot, but his can do attitude and success rate kept him in the air (at least for issues #113, #114 and #116, then Our Fighting Forces #133 of September-October, 1971, his only non cover appearance to this time, before...well, time to introduce the other player on the field....).

Hans von Hammer first appeared in Our Army At War #151 (February, 1965) by Robert Kanigher and Joe Kubert (hidden behind a Sgt. Rock cover), with his first cover being Showcase #57 (July-August, 1965), then moving to a run at Star Spangled War Stories starting with issue #138 (April-May, 1968), Hammer was the son of an aristocratic German family, being one of the first to enlist in German flight training school as World War I began.  An impeccable flyer, Hammer was also guided by an incredible sense of honor, refusing to kill unarmed or wounded opponents. 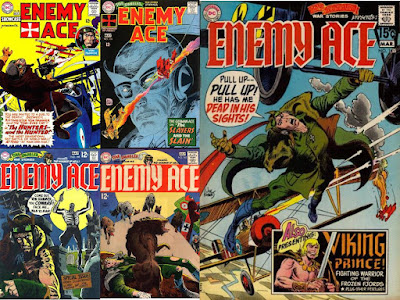 Hammer got an impressive record of kills over the years, earning the nickname the Hammer of Hell, but was deeply conflicted about war and killing, appearing in Our Army At War #153 and #155, Showcase #57 and #58, then a run in Star Spangled War Stories from #139 to #150 and #152...at least until he had a confrontation with Balloon Buster! 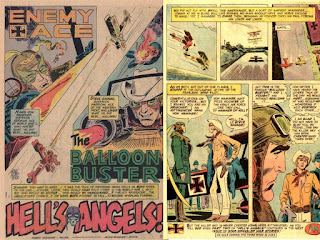 The Balloon Buster and the Hammer of Hell first met in Star Spangled War Stories #181 (July-August, 1974) to #183 (November-December, 1974) by Robert Kanigher and Frank Thorne (though only the Enemy Ace made the first two covers....barely, so, offered instead a tease of the battle between the two, so instead some interior art including American biplane vs Fokker...which ended with both continuing their battles in World War I later). 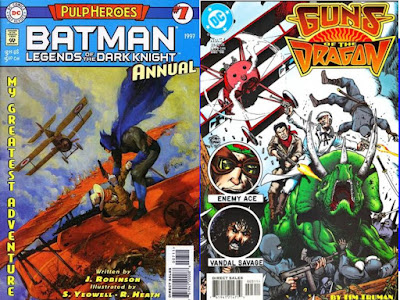 After the battle, Balloon Buster only had 3 appearances in Unknown Soldier (#262 to #264) and a bit in Crisis On Infinite Earths, with his tales ending in Batman: Legends Of The Dark Knight Annual #7 (1997, with a slightly different history), while the Enemy Ace had only one more appearance in Star Spangled War Stories #200, then for about half the issues of Men of War (time travelling to meet the JLA and JSA during this run), then to back ups in Unknown Soldier from #251 to #253, and #261 to #267, missing the Balloon Buster issues), as well as a bit in Crisis; Post-Crisis, Hammer had many appearances, in the superb Enemy Ace: War Idyll, even post World War I, including meetings with Swamp Thing and Vandal Savage with the battle always continuing...
Posted by Dave's Not Here Comic Blog at 8:11 AM