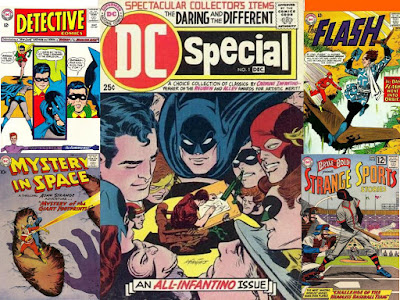 Remembering artist Carmine Infantino (May 24, 1925 - April 4, 2013) with something special....DC Special #1 (October-December, 1968), featuring the artist at work on some of DC most famous (and a few less so), but all characters that he had a connection to in this "All-Infantino" issue! 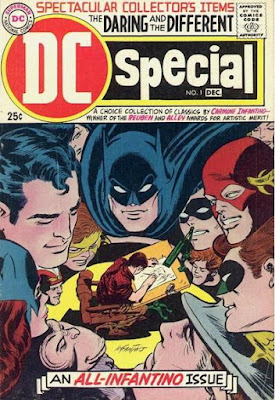 Carmine Infantino had a long career in comics, working on the Golden Age Flash and co-creating Black Canary, as well as others back in the day, then getting to bring back the Flash to start the Silver Age, co-creating Elongated Man, having the two Flashes meet...

...before moving over to Marvel to work on Spider-Woman, Nova and Star Wars (and others), before coming back to the Flash when Barry Allen got ready to face the Crisis. 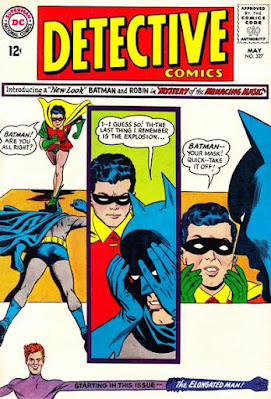 In "the Mystery Of The Menacing Mask" (May, 1964), written by John Broome and inked by Joe Giella...

....the first of the "new look" Batman (including the yellow oval), Batman and Robin faced a mystery menace with a red X on their foreheads...that allows crook Frank Fenton to paralyze them and escape.

The Elongated Man story (also by Infantino) was reprinted elsewhere. 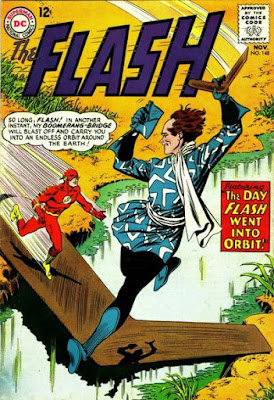 Here, in the story NOT featured on the cover, "The Doorway To The Unknown" (November, 1964), written by John Broome and inked by Joe Giella, the Flash (Barry Allen) gets involved in a slightly supernatural tale...

...where he comes home to find a Fred Dallman in his apartment....a bank vice president who tells Barry that another man will go to prison for a crime Fred committed.  Barry works to clear the man, but also discovers Fred died in a car crash....before Barry met him in his apartment!

Adventures Of Rex The Wonder Dog #29 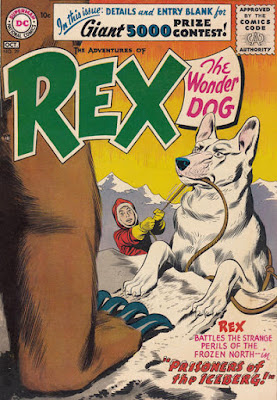 Though the cover is by Gil Kane/Bernard Sachs, it is the Detective Chimp story from the issue (written by John Broome for September-October of 1956) of "The Scientific Crook Catcher"...

...where Bobo has to disguise himself as a human scientist to catch crook Larry the Lynx at a scientific convention!

Bobo, the Detective Chimp really had little involvement with the rest of the DC Universe until he showed up in Gorilla City during the Crisis On Infinite Earths (having long life as he and Rex found the fountain of youth in a DC Comics Presents back up years before). 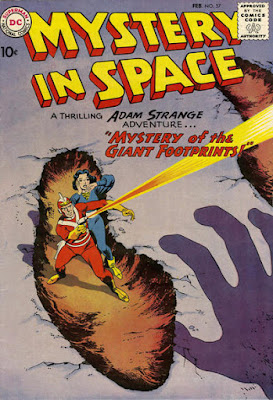 An early Adam Strange adventure where Gil Kane and Joe Giella did the cover, Gardner Fox provided the story and Murphy Anderson the inks for the "Mystery Of The Giant Footprints"...

...where Adam and Alanna faced giant aliens called the Rhollians who were affected by a material called Orichalkum, that made them grow to giant size.  The aliens try to sink the island, and the island eventually does go underwater after Adam and Alanna gave them chase to let the island sink naturally.

Adam Strange and his adventures on the far away planet of Rann were still only a small part of Mystery In Space at this point, with two other stories in this issue. 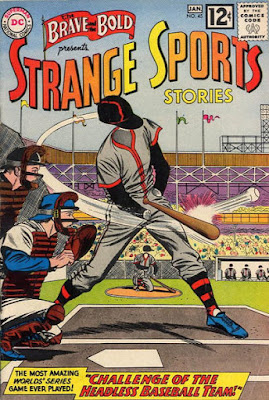 Last, but not least, a cover by Carmine, inked by Murphy Anderson, which is also the story by Gardner Fox and inked by Joe Giella from December-January, 1962...
...wherein a series of Strange Sports Stories ran in B&B...with the "Challenge Of The Headless Baseball Team" was the first story, where uniforms were playing the game without their players!

The DC Special also had a summary of Carmine's career up to that point!

Posted by Dave's Not Here Comic Blog at 1:32 AM