Magically, more on Blue Devil.  Here, it is time to delve a little into his mystic side, as he deals with a demonic invasion, as well as starting to settle into a more usual routine (well, usual for a stuntman turned demon usual), all with some magical help from the magical lady of hte JLA,  Zatanna! 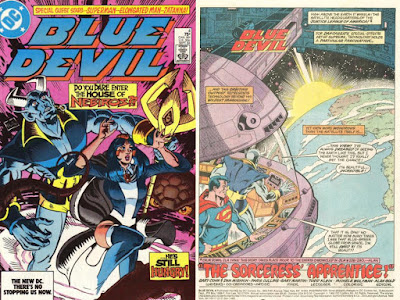 First up, picking up from when Superman took stuntman Dan Cassidy out of Metropolis, Superman and Blue Devil ended up in the JLA Satellite (still intact though that was changing at the time in the Justice League of America title as Martian Manhunter returned....leading to a team with 4 new members), checking out the view to start Blue Devil #4 (September, 1984) by Gary Cohn, Dan Mishkin, Paris Cullins and Gary Martin. 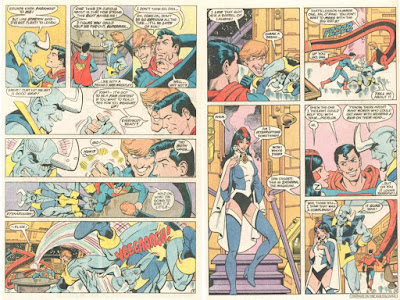 Up in the satellite, Dan meets the Elongated Man (Ralph Dibny), and tries a little stress test with Superman to find out about the strength of the suit (it isn't quite up to Superman level).  Then, Superman introduced Blue Devil to Zatanna, who tried her magic to remove Dan from the suit (to no avail).

So, Zatanna summoned her Demonography book from her father Zatara's mansion (Shadowcrest in Gotham), to read up on the demon who stuck him in that suit, Nebiros. 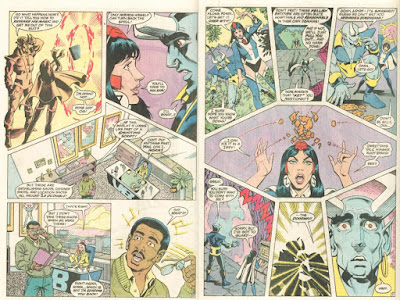 Reading that, learning that Nebiros once allied with dark forces across the Earth and was banished on a small island by ancient sorcerers to another dimension until Dan and crew freed him, learning that only Nebiros can end Dan being trapped in his Blue Devil super suit.  Meanwhile, back at the studio, Marla Bloom was sending cameraman Norm Paxton back to the island for some additional pick up shots while Sharon Scott called from Metropolis to let Marla know that she wasn't happy with the restraining order on Blue Devil (and that he went off with Superman). 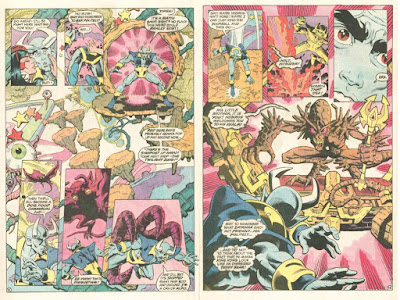 Meanwhile, Zatanna and Blue Devil beamed down to the Ile Du Diable from the JLA Satellite, with the idea that Dan could just go into Nebiros' realm and ask him to return him to normal.  After Zatanna mystically restored the key to get through the portal, Blue Devil went, and, eventually found Nebiros with Dan's Blue Devil trident (which Dan used to push Nebiros though the portal back in issue #1).

Nebiros was happy with his "little brother's" gift, and put extra enchantments in the trident.  Dan asked Nebiros to return him to being a man, but Nebiros thought him deluded, and seeing a mystic portal, thought to take Blue Devil back to Earth and cure him of this delusion of being a man. 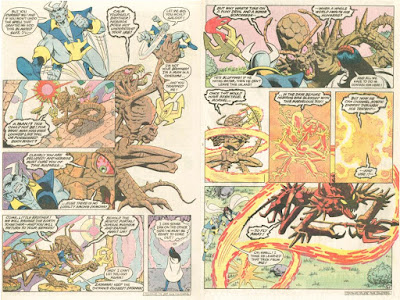 Back on Earth, Zatanna, thinking only Dan was returning, opened the portal, and then the duo proceed to battle Nebiros....with Norm and his helicopter pilot joining in!  Nebiros, tired of this, used Dan's empowered trident....to fly off the island.  Blue Devil and Zatanna beamed back up to the JLA Satellite to track him (leaving Norm and the pilot behind.....). 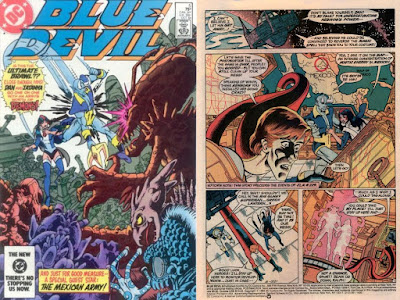 Back up in the JLA Satellite with the Elongated Man is where Blue Devil #5 (October, 1984) by Gary Cohn, Dan Mishkin, Paris Cullins and Gary Martin starts, with Blue Devil and Zatanna going after the recently freed demon who had ended up in Mexico! 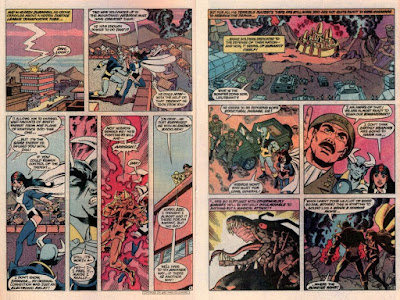 In Mexico, Nebiros was restoring one of his old houses, buried in the sand, as Blue Devil and Zatanna arrived.  Zatanna convinced Blue Devil to try to summon his trident (to no avail at a distance), and the duo ended up teaming up with the Mexican army to get to where Nebiros was.

As the heroes and army prepared to attack, Norm parachuted in (having been sent there to get more location footage for Marla).  Back in Hollywood, Marla went after studio head Jock Verner to get him to end the injunction against Blue Devil. 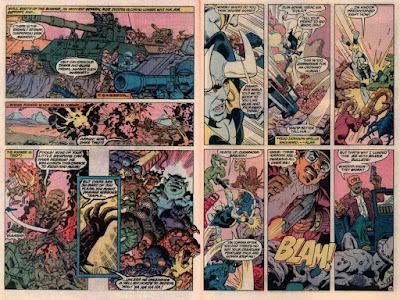 In Mexico, General Ruiz and his army attacked Nebiros, who, though surprised by the advancements humans had made, still easily defeated the human forces.  Zatanna and Norm waded into Nebiros' newly summoned demon army while Blue Devil fought Nebiros to get his trident back and rid Earth of this demon, all while the Monitor and Lyla watched (and there was a whole lot more going on with the two of them, as they watched other mystics, the JLA and more!). 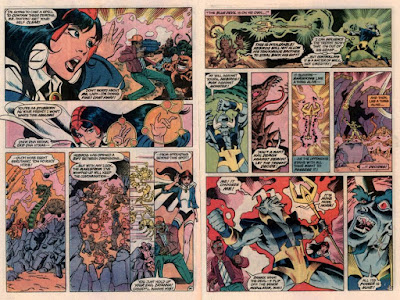 Getting his trident back, Dan went a little more demonic (FORESHADOWING), but with the extra power and a boost from Zatanna, sent Nebiros and his forces back through the mystic portal (summoned by Nebiros to bring his army here), thus saving Earth from his evil once again.  Zatanna congratulated Dan on his heroic effort, let him know that the trident still had extra magical energy (but should be safe) and beamed back to the JLA Satellite, with Blue Devil and Norm in the middle of the Mexican army, wondering how they would get home. 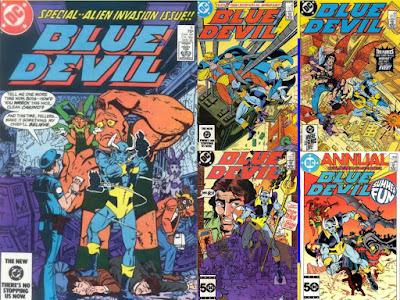 Next issue, they head home (via Las Vegas, with all the chaos that can happen there), and yet more Blue Devil hilarity ensues, the next time the fancy strikes to write about him in these still yet to be collected tales!