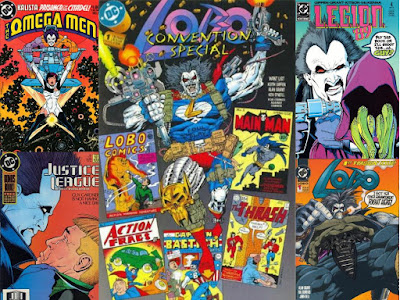 With San Diego hosting their annual convention, here's to hoping all that are there are having a good time.

But, there was a time when the Main Man went down to the convention floor, and all hell broke loose!

First, though, a little history of dolphin loving Lobo! 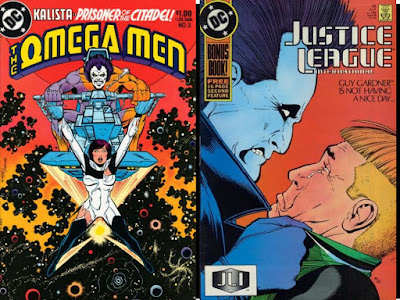 Lobo premiered in Omega Men #3 (June, 1983) by Roger Slifer, Keith Giffen and Mike DeCarlo, where he had been hired by the Citadel to capture Queen Kalista.  Appearing here and there in the series, Lobo helped the Omega Men defeat the Citadel.  Later, he returned in
Justice League International #18 (October, 1988), now working for the Cluster, and, through a series of mishaps, fighting Green Lantern Guy Gardner. 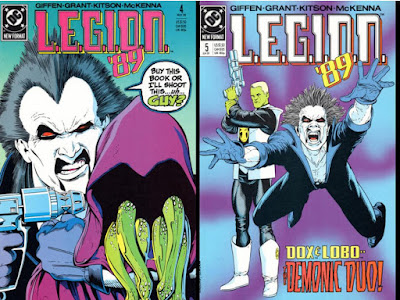 Spinning out of the Invasion! event, L.E.G.I.O.N. got its own title, and Lobo followed soon after.  He appeared first in L.E.G.I.O.N. '89 #3 (April, 1989), finding one of his precious space dolphins dead, he went to track the killer.  Lobo decided it was Garryn Bek, and, as he was about to kill him (and other team members like the Durlan), Vril Dox (the son of Brainiac)  made him an offer he couldn't refuse, leading to Lobo joining L.E.G.I.O.N. in L.E.G.I.O.N. '89 #5 (June, 1989), with Dox using Lobo's battle energy to convince Bek's disreputable police force to be the foundation of an intergalactic police patrol, taking down an interplanetary drug lord with an army of Lobos (as Lobo replicates when his blood is shed....).. 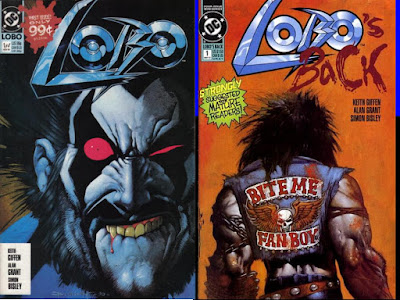 After encounters with Superman and Mr. Miracle, Lobo had a few mini-series, specials and even an Annual.  His first 4 issue mini-series from 1990 by Keith Giffen, Alan Grant and Simon Bisley, had Lobo going after a person who wrote an unauthorized biography of the Last Czarnian (him).  A 1992 mini-series, Lobo's Back, finds Lobo dead, but neither heaven nor hell want him, so he gains an immortality.  After a few other specials, full of inappropriate violence and language (all proving popular), Lobo, "he who devours your entrails and enjoys it" finds himself in... 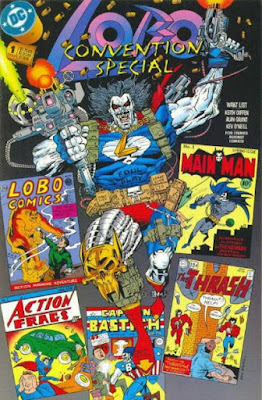 The Lobo Convention Special #1 (September, 1993) was a give-away at the SDCC (and sold through comic shops across America), by Keith Giffen, Alan Grant and Kevin O'Neill.

Lobo, finding his copy of the Death of Superman messed up, wants to get a new one, and decides the best place to get a comic (and not be ripped off)  is the San Diego Comic Convention.

Full of Lobo's unique brand of social commentary (along with plenty of violence...lots and lots of violence), he both succeeds and fails in his quest for the elusive deal on that issue, leaving plenty of carnage in his wake.

The success of his various mini-series, specials, guest appearances and L.E.G.I.O.N. membership lead to.... 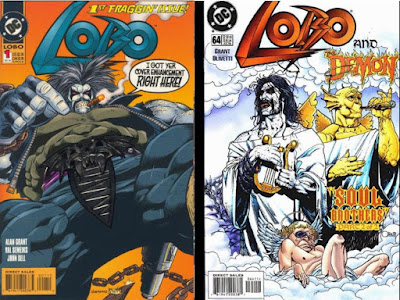 Lobo finally got his own regular title, with Lobo #1 (December, 1993), which lasted for 64 regular issues as well as a zero issue and one special 1 Millionth issue, ending in July, 1999.

Still somewhat offensive, but much more in a comedic vein, quite a bit of fun was had here, firmly implanting Lobo in the DC Universe, where he continues to be revived here and there (in places including R.E.B.E.L.S. and Young Justice to this day.
Posted by Dave's Not Here Comic Blog at 9:30 AM