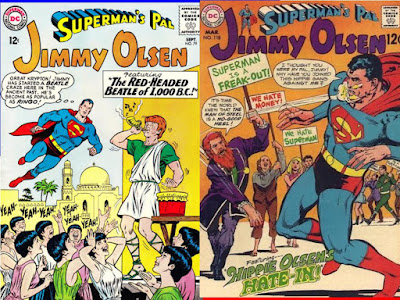 Fact of the matter is, it's hard being Superman's Pal and a cub reporter at the same time.

Being a reporter means having to constantly be on the go, learning new things..

...and those new things that Jimmy Olsen would learn at times, would put him at odds with his friend, Superman! 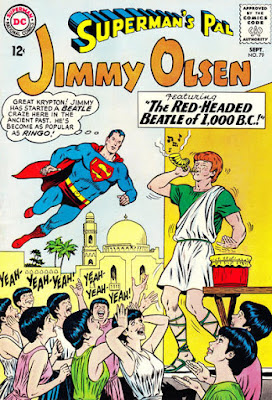 How fab!  Jimmy has taken up rock and roll, making him a popular as the Beatles (well, as Superman points out, maybe only as much as Ringo) in Superman's Pal, Jimmy Olsen #79 (September, 1964) by Leo Dorfman and George Papp, all under a cover by Curt Swan and George Klein.

While wearing a Beatle wig, Jimmy is listening to the Beatles, but he stashes the wig in his pocket as he gets a knock on the door.  Kasmir is here, claiming to be a lawman sent to Jimmy by the Legion of Super-Heroes, who want Jimmy to take Kashmir back 3000 years.  Jimmy drives Kasmir's time bubble there, where the future man reveals he was really a criminal, and needed Jimmy to drive the vehicle (which only got to Jimmy's time because it was pre-programmed). 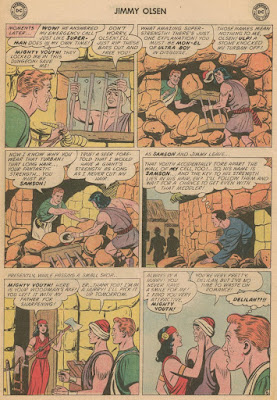 Firing on Jimmy, Olsen is saved by Mighty Youth, a young hero in a turbin with incredible strength.  Mighty Youth sends Kasmir fleeing, and takes the now damaged time sphere to his secret base, then helps Jimmy get a job as a sheep-shearer (with Jimmy finding out his helper is really Samson, hiding his hair to keep his strength).  Making too little, Jimmy dons his Beatle wig, and, after making twelve Beatle wigs with black dye and leftover wool, sells the wigs as he entertains the townspeople with Beatles' songs.  Kasmir finds him, and tries to steal Jimmy's profits, but both end up in jail.  Mighty Youth helps free Jimmy, and Superman shows up, having tracked the time sphere, helping Jimmy and Samson against Kasmir (who tried to depower Samson by cutting his hair, except Jimmy had slipped his wig on Mighty Youth in the dark).  After one last performance, Superman takes Jimmy and Kasmir back to their respective times. 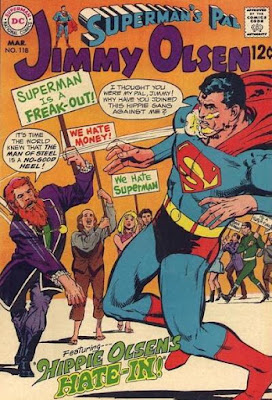 The days of peace and love seemed to take a wrong turn in Superman's Pal, Jimmy Olsen #118 (March, 1969) by Otto Binder and Pete Costanza (with a Neal Adams cover),  as Jimmy turned into a hippie, getting his hate on for the Man of Steel!

Jimmy avoids the barber for a while, letting his hair go for an assignment for Perry White...to join Guru Hansen's hippie cult.  While there, Jimmy listens to them preach love, and falls under a spell of their flower power, with a mist that he thinks takes him to dream land (wherein he goes to punch Perry White for not giving him a raise on this assignment).  He comes back to the love-in thinking it was all a dream, only to be exposed to the flower gas again, which sends him to get revenge on his girl, Lucy Lane, who was out dating another boy after seeing how messy Jimmy was becoming. 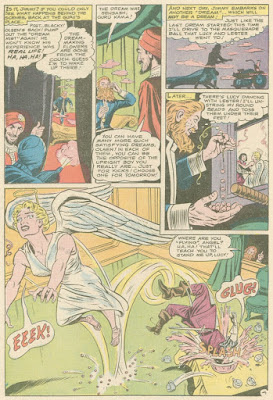 Going back to the commune, the Guru and his partner, Blacky Sloan, send Jimmy out again, where Jimmy tries a "hate-in", with signs saying how much the hippies hate everything (but supposedly with opposite sayings on the back).  Superman shows up and confronts him angrily, but quickly leaves (being the Guru is disguise).  When Jimmy comes back to the commune, the Guru baits Jimmy into wanting to get even his with pal, by killing him with Kryptonite (since it will "only be a dream").  Jimmy does, making lead-coated Kryptonite bead necklaces, which, after Superman arrives, Jimmy dissolves the lead with his signal watch.  Guru and Blacky arrive as Superman is dying...which helps Jimmy realize this is real, and he saves Superman, who catches the criminals (and helps the hippies realize how wrong they were to follow criminals who were exploiting their lofty ideals).  Jimmy then heads back to the Daily Planet, where he is confronted by an angry Perry White (and avoids an even angrier Lucy Lane).