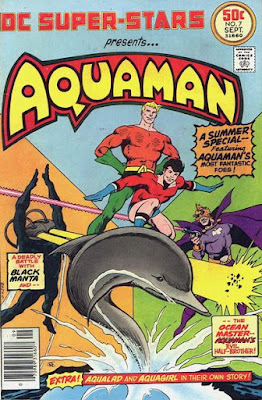 Aquaman didn't have any 80 page or 100 page reprint collections all to himself, but one of the ones he had all to himself was DC Super Stars #7 (September, 1976), and what a fine collection it was.


All under a Jim Aparo cover, with a few great tales within, as well as a few special features, all to please even the fussiest of Aquaman fans.


Let's take a look at the tales just below the surface! 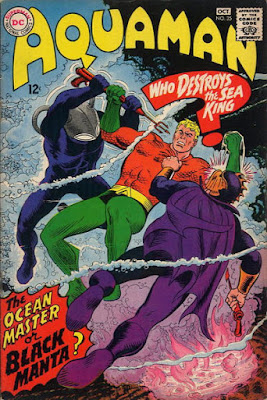 First up is Aquaman #35 (September-October, 1967) by Bob Haney and Nick Cardy, wherein Aquaman found himself "Between Two Dooms".

This was a huge issue for the Aquafamily.  First, Atlantis was attacked by Black Manta (his first appearance, though it doesn't feel so), wherein he captures Aquaman as the Sea King goes out to fight him.  While captured, Black Manta poison's Atlantis' dome, forcing Dr. Vulko (a senior advisor of Aquaman's) to pump all the water out of the city and, after Aquaman returns, initiate Project X, a plan that turns all the city dwellers into air breathers.  With only Aquaman, Aqualad, Mera and Aquababy being able to breathe water, Mera and Aquababy have to go outside the dome for a bit to breathe, where Black Manta captures the boy.  Meanwhile, Ocean Master (a previous foe of Aquaman's) was planning an attack, sees this and takes Aquababy for himself, leading to a fight between the villains, which Aquaman intercedes in...until he is injured.  Ocean Master wins, but gives Arthur Jr. to his dad, and leaves Atlantis behind. 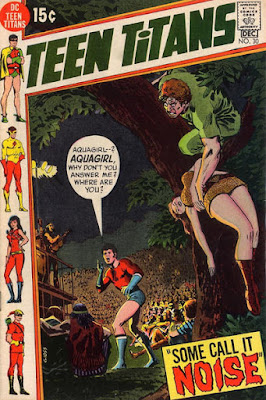 The second and final reprinted tale was a short from Teen Titans #30 (November-December, 1970), with Aqualad and Aquagirl (her only Teen Titans appearance before the 1980s) headed to a concert inland, where they would find "Some Call It Noise" in a story by Steve Skeates and Nick Cardy.

Garth and his Atlantean girlfriend, Tula, try to attend a concert, but have to deal with a problem first, that of an escaped mental patient enraged by an experimental hormone treatment.  While Aqualad defeats him, the patient injures Aquagirl, forcing Aqualad to take her back to the water...which he has to hurry to do because of the one hour limit Atlanteans have to be away from water. 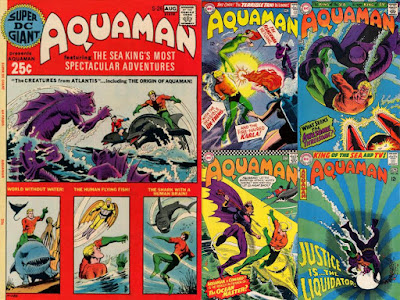 Better still, there were a few pages on additional Aquaman villains...