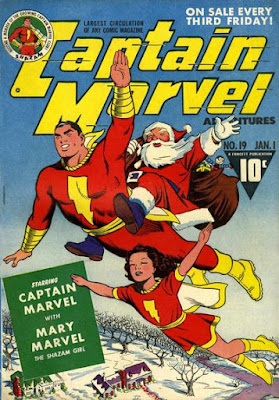 Billy Batson had been use to celebrating Christmas alone, but after finding his sister, Mary, in the previous issue, Billy was able to say "Shazam!" with joy, as he and his sister both became Marvels!


Marc Swayze provided the cover to the second appearance of Mary Marvel in Captain Marvel Adventures #19, which came out on January 1, 1943, with Cap and Mary helping out Santa Claus!
Posted by Dave's Not Here Comic Blog at 4:00 AM