A Quiet Night For Batman 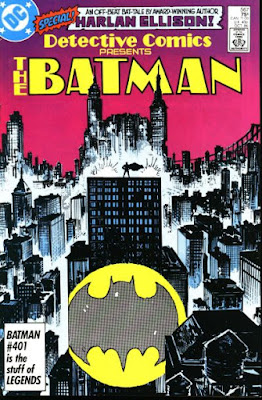 Ever have a night when everything went wrong?

Even Batman did, as Harlan Ellison (a story he had long ago promised to do for Julie Schwartz, just a decade and a half late), Gene Colan and Bob Smith presented in Detective Comics #567 (October, 1986) under a Klaus Janson cover.

In "The Night Of Thanks, But No Thanks!", Batman....wasn't needed.  The Gotham Police Department had things handled, people just lost the keys to their cars, electric company workers were just doing their jobs....all in all, when Batman gets home at the end of the night shift, he tells Alfred that he had a bad night....because there was no crime for him to stop!

If only Batman had more of those nights!
Posted by Dave's Not Here Comic Blog at 4:00 AM