No Christmas For Aquaman 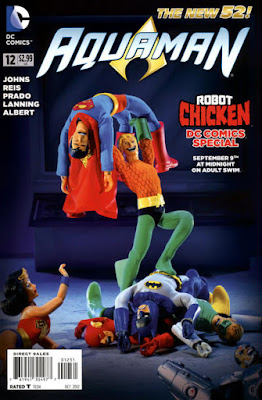 It seems Atlanteans don't celebrate Christmas, as, while Aquaman has been in an occasional holiday special comic, Aquaman hasn't really celebrated Christmas during his nearly 80 year publishing history.

But, since it doesn't seem fair to not include the King of the Seas this week, here's a cover of Mego action figures, with Aquaman taking on the JLA from Aquaman #12 of October, 2012....and proving to be a bit naughty, so maybe the Sea King isn't worried about coal in his stocking (after all, how would Santa get into a home in Atlantis with no chimneys?).
Posted by Dave's Not Here Comic Blog at 4:00 AM