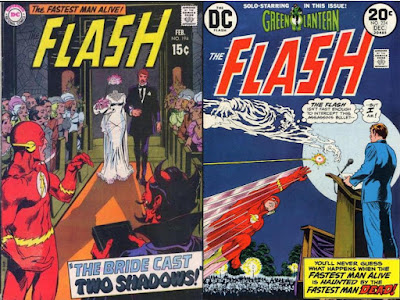 Barry Allen is a police scientist in Central City, and as a CSI, he believes in what you can see.  But, in his super-heroic identity as the Flash, Barry has occasionally run into magical menaces that tax the scientific method....

.....and deal with the supernatural!

Here's a quick look at two stories where the Flash was thrown out of his normal world! 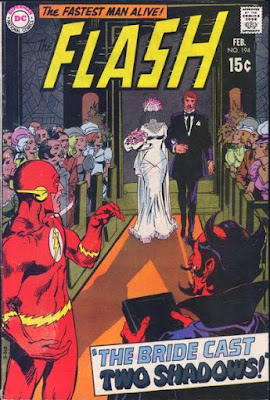 Weddings are usually a happy time, but not so much when "The Bride Cast Two Shadows", like shown in Flash #194 (February, 1970) with a stunning cover by Neal Adams, and story by John Broome, Ross Andru and Mike Esposito.

The issue starts off normally enough, with Flash capturing the Owl Gang, but things get weird when a lady named Joan Boardman wanders into the battle (as she's been possessed by the spirit of Elfriede Talman, a woman who disappeared on the eve of her marriage to Daniel Porter....100 years earlier!).  The spirit of Elfriede mistakes Barry for her intended husband.  So, Barry brings her home to Iris, then let's Daniel possess him so they can complete their marriage, where the ghosts go to the spirit world, while Flash has to navigate his way back, fighting demons along the way to get home to Iris (and find Joan restored to normal, with no memory of the events that passed). 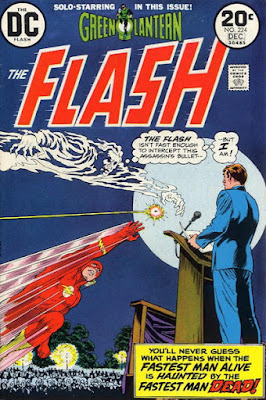 Barry Allen might be the fastest man alive....but, who is "The Fastest Man Dead"?  Flash #224 (November-December, 1973) answers that question with a story by Cary Bates, Irv Novick and Dick Giordano, under a cover by Nick Cardy.

Charlie Conwell was a detective, and old friend of Barry Allen (who once suspected Barry was the Flash), who was running for Central City District Attorney until he was shot by hitman Bork (whose bullets Barry was unable to stop all of; the mob then took out Bork with a poisoned payoff...no known relation to the Bork Batman and Flash faced).  As the Flash, Barry worked to spook the Maxel Mob who orchestrated the hit, but the Flash didn't know that he was in over his head fighting the mob....because the ghost of Charlie was helping him out! 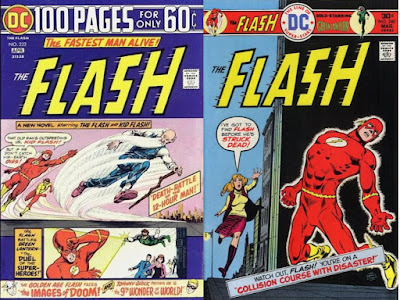 Charlie's daughter, college student Stacy Conwell, comes to live with the Allens, starting with Flash #232 (March-April, 1975), and even exhibits the powers of ESP....but, they found the truth to be out there as those powers end up having a supernatural explanation, tied to a crashed alien ship she encountered when her twin sister died (as explained in Flash #240 of March, 1976). 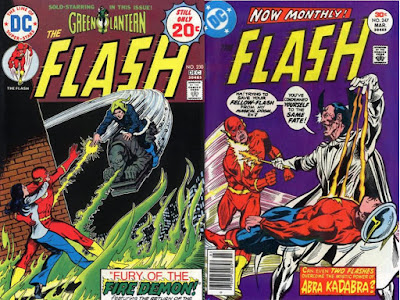 Flash did have foes like Dr. Alchemy and Abra Kadabra, but, when Barry Allen faced them, their magic was really just unexplained science.  Dr. Alchemy from his Philosopher's Stone, and Abra Kadabra using 64th Century science (though later stories had both using "real" magic). 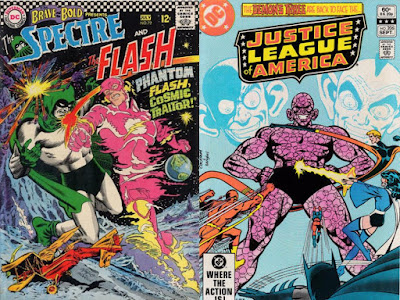 Still, Barry did have to believe, as he did work with a few magic users, like Spectre and Dr. Fate from the Justice Society and Zatanna from the Justice League (who helped with magical menaces like the Demons Three!).
Posted by Dave's Not Here Comic Blog at 3:33 AM