Batman Vs. The Original Clayface Batman has had a long history facing off against Clayface, but, for our purposes, time to start of with the very first...


....a man in a mask, who was on a murder spree in the pages of Detective Comics! 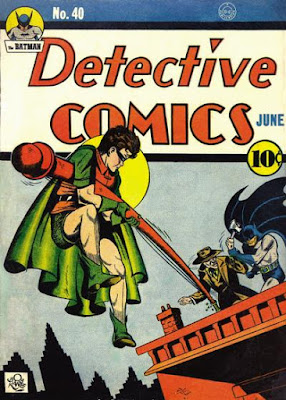 Batman and Robin have to deal with "The Murders Of Clayface" in Detective Comics #40 (June, 1940) by Bill Finger, Bob Kane and Jerry Robinson.

Julie Madison, Bruce Wayne's fiance (seen previously when Batman faced vampires, as well as in the last issue of Detective Comics), has a new acting job, working on a movie called "Dread Castle".  Problem is, the actors on the set are really being murdered!

The first victim is the lead female, Lorna Dane, and the second, her boyfriend, Fred Walker.  Fred holds on long enough to say the work..."Clayface" before he dies. 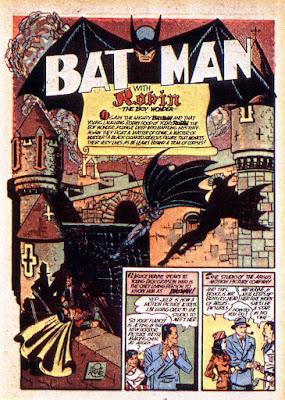 This leads Batman and Robin to investigate the set, with the Batman tangling with some gangsters (who have no relationship to the murders), as Robin has to contend with Clayface on his own!  Thankfully, Batman saves Robin, but Clayface escapes.

The next day, while Julie is filming, Clayface attacks again, but this time Batman and Robin were ready for him, capturing the villain.  Batman removes his mask to find out he was Basil Karlo, an ex-actor who was the star of the original movie, "The Terror",  they were remaking, and got a job as a make-up man on this picture.

Basil would have gotten away with it too, if not for Batman and that darn kid. 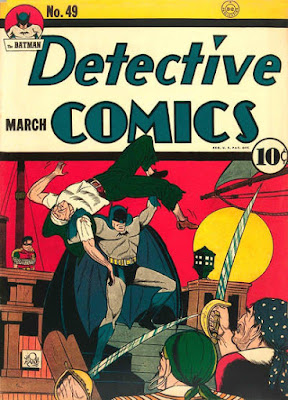 "Clayface Walks Again" in Detective Comics #49 (March, 1941) by Bill Finger, Bob Kane and Jerry Robinson, and this is also the next appearance of Julie Madison as well.

Julie had become a big movie star, big enough that her agents required her to change her name to Portia Storme.  Having a successful career, Julie/Portia encourages layabout playboy Bruce Wayne to perhaps find something to do (not knowing how Bruce spends his nights).  Bruce, unable to give up being the Batman (or tell Julie of his masked identity), instead simply dodges the question.

Julie calls an end to their engagement at this time. 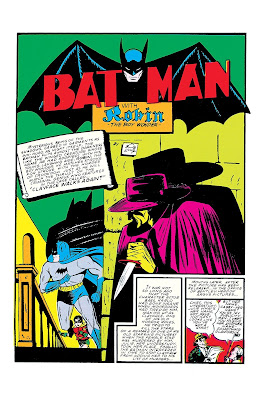 Making matter worse, the vehicle transporting Basil Karlo to an asylum becomes involved in an accident, with Karlo being the only survivor.  On the loose, Karlo dons the costume of Clayface, planning to resume his killing spree at the studio.

When Bruce learns of this, he (as Batman) and Robin head to the studio to look for Clayface, with each of them facing the foe individually without success, but that inspires Clayface to try to burn down the studio (capturing Batman and Robin inside as well).  Batman gets out, and goes back to rescue Robin.  With half the studio gone, the film company does try to continue to film, even with Clayface stalking Julie.  Batman has Robin guard her while he looks for Clayface, and finally captures the villain after it appears Clayface was able to shoot Julie with bow and arrow (though, this was just some trickery on Robin's part, who was disguised as Julie, with appropriate insulation to stop the arrow, while Julie was disguised as Robin).

These two tales have been reprinted many times, but the only times together was in Batman Archives Volume 1 of 1990 and in the Batman: The Golden Age Omnibus Volume 1 of 2015.

Julie never returned in the Golden Age (though more of her history with Bruce was revealed in his Secret Origin from Secret Origins #6 of September, 1986). 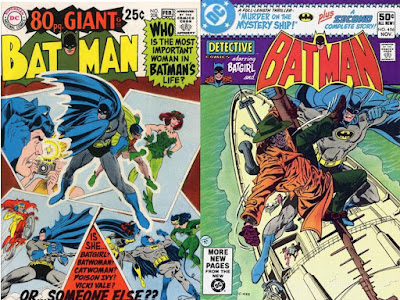 There were Earth-1 versions of these two stories, as revealed in Batman #208 (January-February, 1969), with Bruce not completing an engagement with Julie.  This Julie returned in a couple of issues of World's Finest Comics (#248 and #253) where the actress married into royalty.  This Basil did return as well, as the aging ex-actor escaped confinement in Detective Comics #496 (November, 1980), but was killed by filmmaker John Carlinger, who assumed his Clayface identity briefly, to rid himself of his enemies. 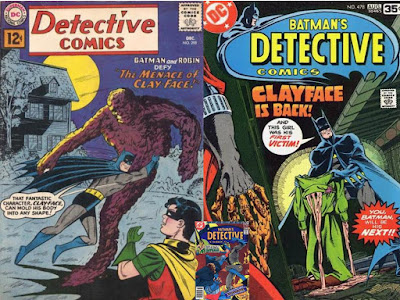 Two other men had assumed the mantle of Clayface... Clayface II was Matt Hagen, who premiered in Detective Comics #298 (December, 1961), and became quite a menace to Batman for a time, with his mystic pool inspired shape-changing powers.  Clayface III was Preston Payne, who first appeared in Detective Comics #478 (July-August, 1978), who was a homely man who became a S.T.A.R. Labs scientist, withdrawing some of Hagen's blood to try to get his shape-changing powers, but instead becoming a man who had to absorb others to prevent his own cellular collapse. 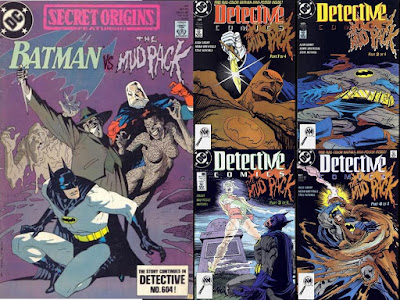 After the Crisis On Infinite Earths, it was revealed that reports of Basil Karlo's death were exaggerated, and instead he gathered the other Clayfaces (including the fourth, Sondra Fuller, a female with similar powers to Clayface II, who was part of Strike Force Kobra that faced the Outsiders), and Karlo took genetic samples from them all to become the Ultimate Clayface, in a story that ran through Secret Origins #44 and Detective Comics #604 to #607 of 1989....and there were still more tales to be told of these, and even more Clayfaces, but time is melting away!
Posted by Dave's Not Here Comic Blog at 4:11 AM