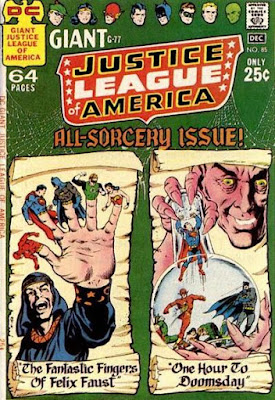 ...with a cover drawn by Murphy Anderson, and having two Justice League reprints inside with the first two part story of the JLA, as well as a special extra little bonus as well! 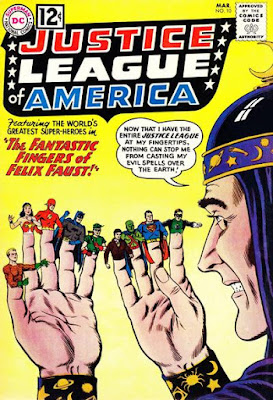 The first tale featured "The Fantastic Fingers Of Felix Faust", introducing this magical foe of the JLA from the tale from Justice League of America #10 (March, 1962) by Gardner Fox, Mike Sekowsky and Bernard Sachs, under an original cover by Murphy Anderson.

This issue also introduced the Lord of Time, as well as the Three Demons (Abnegazar, Rath and Ghast), whom Felix Faust wanted to release and bind, using three items (the Red Jar of Calythos, the Green Bell of Uthool and the Silver Wheel of Nyorlath).  Faust pulls the team away from their battle with the Lord of Time (and his forces that he pulled from the past and future) to retrieve the three items, and face the mystical guardians of those items. 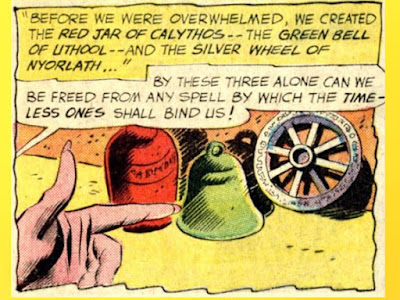 Superman, Wonder Woman and Green Arrow get the Red Jar; Flash, Martian Manhunter and Batman retrieve the Green Bell and Green Lantern, Aquaman and Snapper Carr obtain the Silver Wheel, with Faust having the JLA under a spell....but, thanks to Aquaman's command of fish, these fish intervene, breaking Felix Faust's concentration (ending his spell), which allows the League of capture him (but, Faust did set in motion events which would play out one hundred years later). 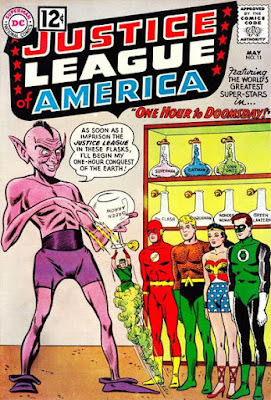 The League returns to their battle with the Lord of Time in 3786 A.D. (using a time bubble built by Superman) , defeating him in the future (as seen originally in Justice League of America #11 (May, 1962) by Gardner Fox, Mike Sekowsky and Bernard Sachs), but are unable to return to their home time, due to the appearance of the three demons in 2062, who capture the heroes, turn them to mist and seal them in bottles!

The heroes do get free, thanks to Green Lantern having used his power ring to give Wonder Woman a delayed command, so she could free herself, then the others.  The Three Demons were busy, trying to restore Earth to how it was when they were free....with no humanity, no moon and rearranged continents.

To prevent the demons from casting spells that target individual Leaguers, Green Lantern disguises his teammates as other members to face their foes.... 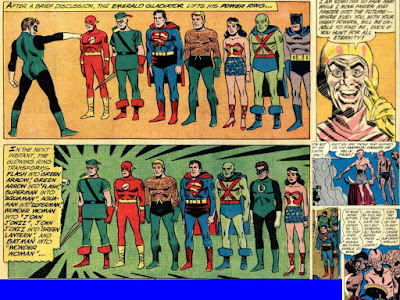 After defeating the demons and returning to their normal selves, the JLA store the Jar, Bell and Wheel at their Secret Sanctuary.

Knights Of The Galaxy An extra reprint is included in this Giant, featuring the Knights of the Galaxy from Mystery In Space #8 (June-July, 1952), in the "Lives Of A Rocket Lancer" by Robert Kanigher, Carmine Infantino and Sy Barry, which was the last of 8 tales featuring this group of future heroes who based themselves on the Knights of the Round Table (a little too much in this tale, as Lyle and the rest of the Knights think they are King Arthur and his Knights, leading lovely lady Ora as the only one who can help them stop space pirates, as she is the only one who can use their future technology!).
Posted by Dave's Not Here Comic Blog at 3:33 AM