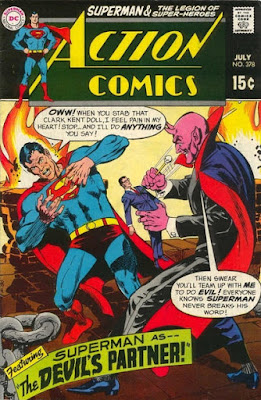 Looks like Superman is in real trouble, fighting the devil, but the real problem of Action Comics #378 (July, 1969) is "The Devil's Partner", a story by James Shooter, Curt Swan and Jack Abel, under a cover by Curt Swan and Neal Adams.

This time around, Superman faces "Satan", or at least an alien with magical powers, who was sent to mess with the Man of Steel, along with a trident made with Kryptonite.

In reality, this devil is Rol-Nac, who happened to be an alien who landed on Krypton, staying there for decades, who became friends with Jor-El and Lara, and godfather to young Kal-El (a.k.a. Superman). 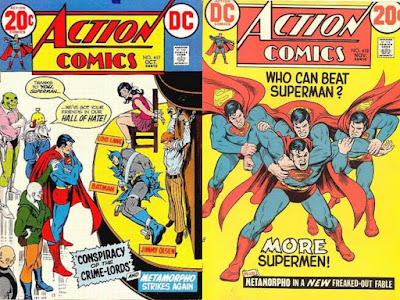 Rol-Nac was said to return in a future story (still waiting), but the Marauder, a viking looking alien villain who changed Rol-Nac into "Satan" would come back for a pair of stories in the 1970s, Action Comics #417 and #418, working with Luthor, Brainiac and the four-armed Grax!