Batman And The Phantom Stranger Meet Superman The Vampire Of Steel 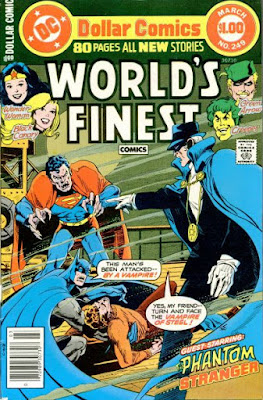 Seems like a lot of words to describe something that's pretty obvious looking at the Jim Aparo cover of the oversized Dollar Comic of World's Finest Comics #249 (February-March, 1977)...


....that Batman and the Phantom Stranger are about to deal with THE VAMPIRE OF STEEL!


Just one of four spectacular stories in this 1970s treasure trove!  Let's look back, shall we?

The Vampire Of Steel 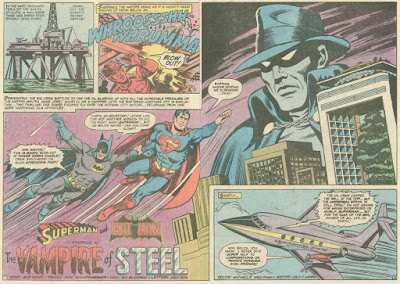 Yes, it bares repeating, so how did Superman get into this fix (other than it being the story by Bob Haney, Kurt Schaffenberger and Tex Blaisdell) to kick off this issue?   Well, Bruce Wayne had a problem at one of his oil rigs, and why have a super friend if you can't ask him to do super favors for you? 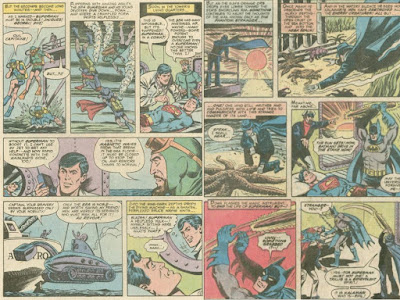 Problem is, while exploring under the rig, Superman gets possessed by a supernatural force, so that at night, he attacks the crew (while Batman fights off forces on his own, with a little help from the Phantom Stranger).  Eventually, the real problem is revealed, and through some complex work, the Phantom Stranger stops the real evil, and Superman is freed from the force of the trillig (undersea vampire).

Will The Costume Be The Hero? 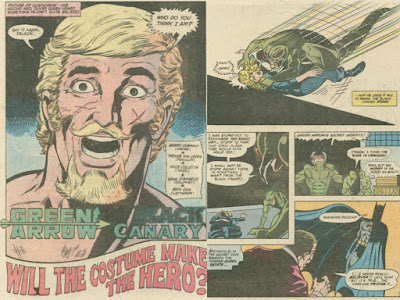 There's more!  Green Arrow is dealing with Black Canary being kidnapped by the Hellgrammite, as well as John DeLeon, the man who took Oliver Queen's fortune (and as readers found out last issue, bought his mansion, with the Arrow Cave and supplies underneath).

So, of course, he figured out that Oliver Queen is....the Batman? 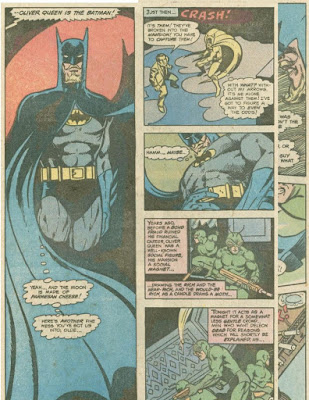 
Picking up from the previous issue, where Green Arrow's costume was torn to shreds, Ollie has to take up Deleon's offer of a Bat-costume to fight the Hellgrammite's men (a darknight detective, Mr. Queen is not).

The Hellgrammite was a foe of the Batman and the Creeper's, who had come to Star City to not face super heroes (failed in that) and to take advantage of an aging population of millionaires with his "Rebirth, Inc." idea....the idea that these rich men give him tons of money, and he gives them back their youth (a con job, as Hellgrammite just kills them, but does it in front of another, with a bit of trickery to think the person is de-aged). 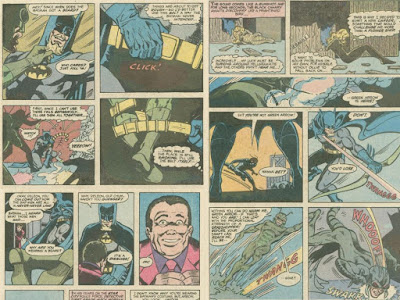 Meanwhile, Black Canary tries to escape her capture with little success, resulting in her calling Queen for help.  This puts him back on the trail of John Deleon (who got away), but Ollie figures out where he was going, and puts a little Green Arrow work into his Batman bit, stopping the villain (who did end the Deleon problem by frightening him to death).  But, Ollie is in hot water with Dinah, as the Black Canary was none to happy to have to be rescued by Green Arrow (no matter what costume he wore....).


Moon Lady And The Monster 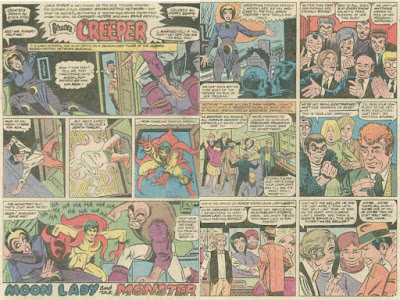 Still, there's more!  A joyous return of Steve Ditko to the Creeper in this issue!

Reporter Jack Ryder (secretly the Creeper) ends up having to protect the Moon Lady (a horror host of the Cosmic Broadcasting Network, as she is attacked by a monster. 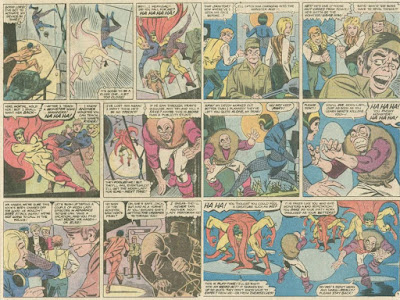 Changing into the Creeper, he fights the Monster, who gets away.  Jack pawns off the protection duty to Fran Daye, so he can investigate, finding a slew of suspects (including a watch group who is offended by her broadcasts, her agent, her ex-partner and even the janitor), eventually unmasking the Monster...but, the Moon Lady was still done in...by poor ratings!

A Fire In The Sky 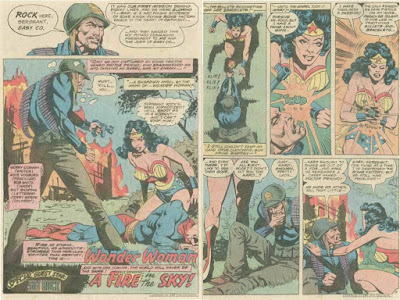 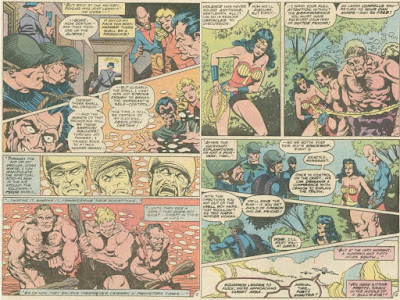 Then, devolving the men of Easy Company, Wonder Woman had to face them, as Dr. Psycho lied to the Krell to get them to help the Nazis.  Wonder Woman found the truth in all of this, getting a captive Krell to tell the truth to his friends, so that they instead bombed Nazi sites, as she also stopped the doctor, and had him end his transformation of Easy Company.   She's a wonder, that Wonder Woman!