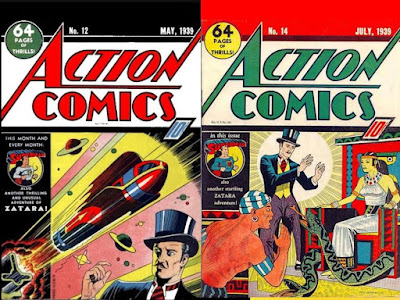 According to the old DC calendar, today is the birthday of the magician, Zatara.

Giovanni "John" Zatara first appeared in Action Comics #1 (June, 1938) by Fred Guardineer (an issue which also premiered a certain caped Kryptonian),  but Zatara only appeared on two covers as the main feature, #12 and #14. 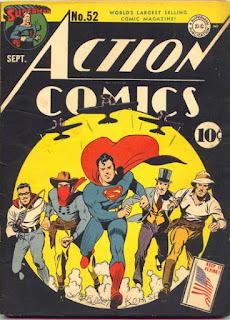 Zatara was a stage magician, but he also practiced real magic, which he could manifest by speaking backward, causing whatever he said to happen.  Zatara would work with his East Indian bodyguard, Tong, to fight evil wizards and druids, thieves such as the Tigress, and even invaders from Saturn and the moon.

Writer Gardner Fox, who wrote some of Zatara's earliest tales, revived him in the 1960s, as he went missing due to the manipulations of sorceress Allura, sending his daughter, Zatanna, to quest for him.  Later writers writing of past have included him in the histories of Phantom Stranger, the Spectre, Madame Xanadu, a pre-Batman Bruce Wayne, Superboy and even as a member of the All-Star Squadron, cementing a place in history of this early DC magician!