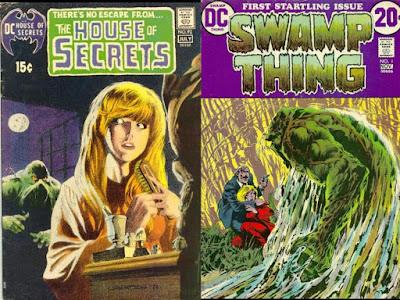 Swamp Thing may have started his first appearance fully formed, but he had back story that developed as that appearance progressed...

...and, the swamp's protector even had it happen twice!  Read on to see how DC fans were introduced to two Swamp Things in the early days of the Bronze Age....and how they would eventually meet! 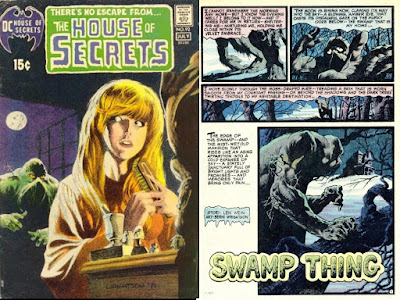 The original Swamp Thing first appeared in House of Secrets #92 (June-July, 1971) in a tale by Len Wein and Bernie Wrightson, as the creature watched a mansion at the edge of the swamp.  In the mansion, were recent husband and wife, Damian Ridge and Linda Olsen Ridge, married six months, yet Linda kept thinking of her previous husband, Alex Olsen.  Alex and Damian were scientists, and in the process of their experiments, Alex was killed in a fiery lab experiment. 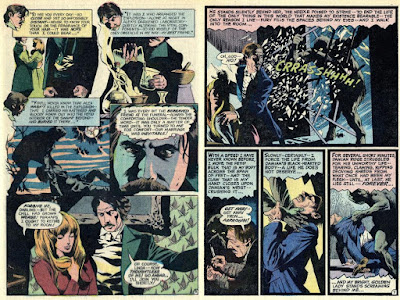 Damian had sabotaged the experiment, and taken Alex's dying body, and buried it in the swamp, as Damian had secretly lusted for Linda.  After Alex was gone, Alex pursued and married Linda, but she was beginning to suspect something.  Alex, realizing he loved freedom more than Linda, planned to kill Linda.  The swamp creature saw Damian trying to kill Linda through the window, and burst in, killing Damian.  Linda recoiled from the creature in fear, so the creature left, with Linda unaware that the creature was the mutated body of her husband, Alex Olsen. 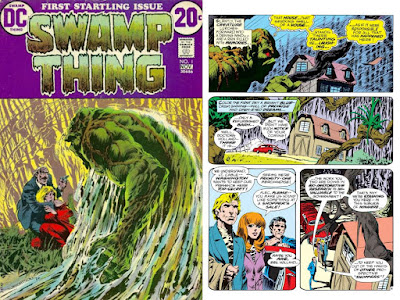 That tale was so successful, that Wein and Wrightson were allowed to do it again with Swamp Thing #1 (October-November, 1972).  This time around, it was a different Swamp Thing watching a barn on the edge of the swamp, a barn to which had previously come government agent Lt. Matt Cable, bringing scientists Alec and Linda Holland, a married couple that had been working on a bio-restorative formula that would accelerate and enhance plant grow, which would be very valuable to many people.

After Cable left them to their work, the couple were approached by Maxwell Ferrett and his thugs, who were looking to purchase the formula (which the Hollands were unwilling to sell). 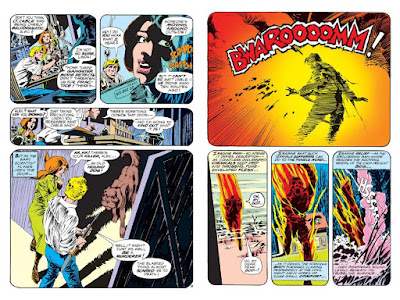 Ferrett left making a threat to the couple, leaving them on edge (though they felt better after a wayward dog later came to the barn/laboratory.. ...though they shouldn't have, as the dog had a bug...which allowed agents of the Conclave to listen in to them, all the better to direct Ferrett, their agent).  After Linda leaves for a bit, Ferrett comes back, trying again to get the formula from Holland, who again refuses.  So, Ferrett rigs a bomb underneath the lab table, and leaves.  Holland wakes up, sees the bomb, and as he goes to defuse it, watches it explode under the bio-restorative formula, burning Holland, and sending his flaming body running into the swamp to die. 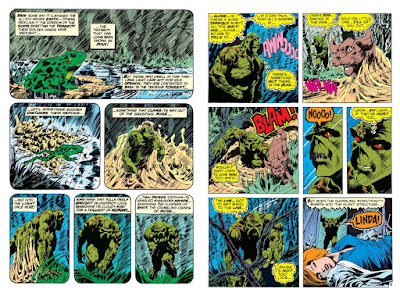 As Cable and Linda bury a coffin representing the presumed dead Alec Holland, and have the government restore the barn/laboratory, the swamp gathers together, creating the Swamp Thing with the memories of Alec Holland, who vows to protect Linda from returning evil.  Cable, Linda and the dog return to the lab, where the dog wanders off (listening to instructions on his secret transceiver) with Matt Cable chasing after the dog.  Ferrett and his men return, killing Linda.  Swamp Thing finds Linda's body, and, enraged, goes after and kills Ferrett and his men, with Matt Cable returning to witness the end of this story, promising to get answers, as Swamp Thing wanders off to his new home, the swamp.....unaware that he is being watched by something evil and Arcane..... 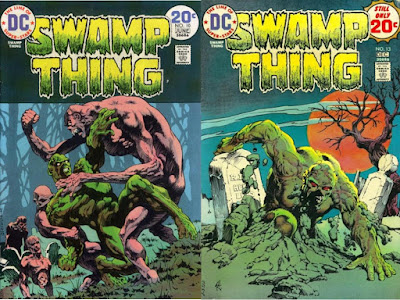 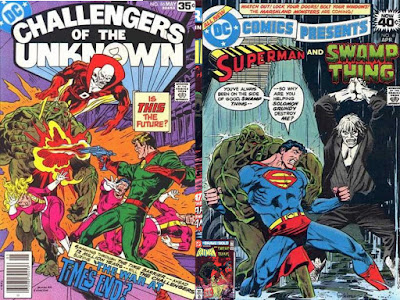 Swamp Thing would have few appearances over the next few years, working with the Challengers of the Unknown and Deadman to fight Multi-Man and to find Rip Hunter in Challengers of the Unknown #83 to #87 in the 1970s, then helping Superman fight versions of Solomon Grundy in DC Comics Presents #8 (April, 1979), and meeting working with Batman in Brave and the Bold #176 (July, 1981), leading into a new Saga Of The Swamp Thing series.

Swamp Thing would come into conflict with the Sunderland Corporation during the course of the Saga Of The Swamp Thing, as well as grow closer to Abby, and battle Anton Arcane again. 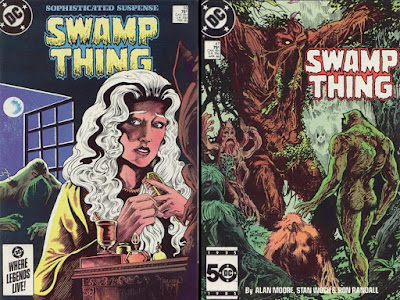 Swamp Thing would also learn uncomfortable truths about himself, and grow into a Protector of the Green, that dealt with the Parliament of Trees, which included others who were Earth Elementals, who had formed from similar accidents to Holland's, including Alex Olsen, who had taken root with the Parliament, and the two would meet as Swamp Thing learned of his real power thanks to John Constantine and his efforts to protect Earth from a coming battle of good and evil (as well as the Crisis On Infinite Earths), all the while, proving love is eternal, and sometimes, have two beginnings.

Posted by Dave's Not Here Comic Blog at 3:11 PM