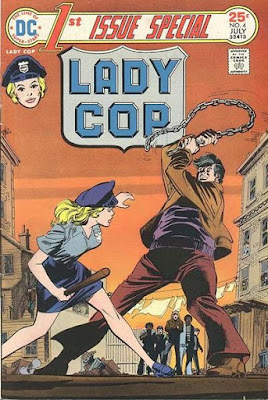 Looking to fill an issue of First Issue Special, DC found a story that had been sitting around for a while.


Originally called Police Woman (which may have factored into this being released, as there as a show by that title on TV at the time), DC filled First Issue Special #4 (July, 1975) with....Lady Cop!


The cover was by Dick Giordano, and the two interior stories were by Robert Kanigher, John Rosenberger and Vince Coletta. 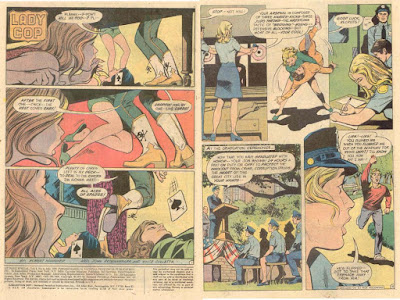 The story starts with young Liza Warner watching her college roommates being killed by a man wearing stylized boots with a black skull and crossbones, feeling he could kill women like tossing out an Ace of Spades from a deck of cards.  While reporting the crime to the police, a female officer praised Liza for her attention to detail, and convinced her to enroll in the police academy.

Liza trained well, and graduated top of her class....stopping a student who had scrubbed out from tossing a grenade at the graduating class. 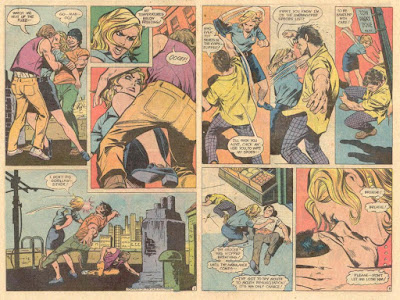 Now on the beat, Liza had to deal with all the problems a police officer faces, as well as her own female problems.  First, she had to stop two thugs from roughing up a young girl, but they turned on her (not accounting for her training, where she stopped them and had them arrested).  Liza still searched for the young girl (as she was in trouble), and, after a day off (having problems with her own boyfriend, Hal, who didn't get her desire for her job), kept searching for the young girl (who she overheard on a phone call, finding out she had VD). 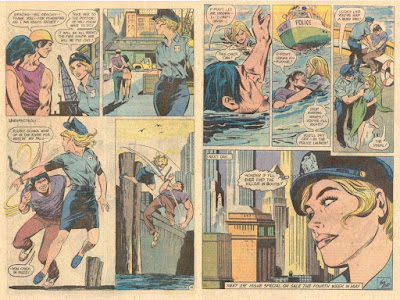 Liza confronted a robber (getting stabbed in the arm in the process), and saved the shop owner's life.  Then, came around to find the girl on the docks, who was waiting for her father.  The girl was worried about her problem, compounded by how her dad would react (having lost his wife a decade ago, and was overprotective of his daughter).  Liza stayed to help the two of them come to terms with the problem, and get the girl some help.

Still, Liza was searching for the "Killer In Boots".


Not the greatest comic story ever told, but likely something destined for a romance comic, that happened to end up here.  Simple by today's standards, a nice look back at the problems that women faced when they joined the police force (and that next issue was one of Jack Kirby's Manhunter!). 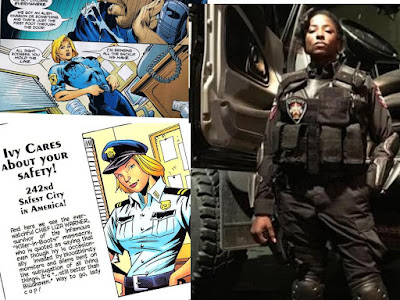 Liza wasn't totally forgotten either, having been revived for a few issues as the chief of police in Ivy Town in the All-New Atom, and being totally revamped as a bad cop for a few episodes of the CW's Arrow over the years.
Posted by Dave's Not Here Comic Blog at 2:49 PM